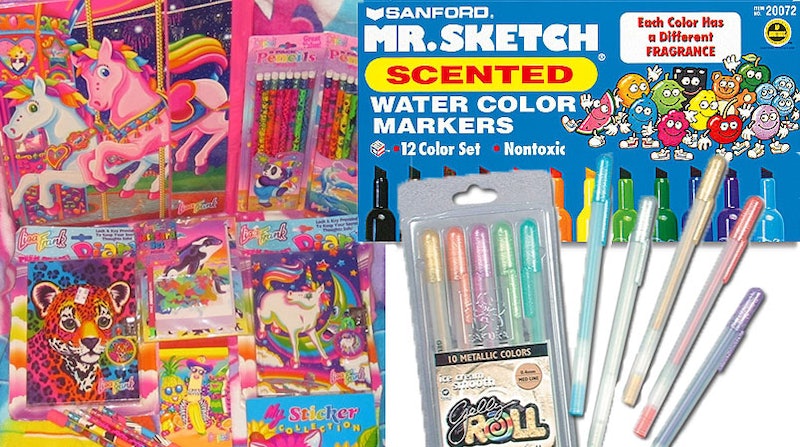 It may only be July, but we’ve got school supplies on the brain — namely, the ones we used to stock our backpacks with when we were kids. We can probably blame those neat-o Trapper Keeper-themed tablet cases we heard about on Monday for this strange and nostalgic preoccupation, because seriously: Who isn’t excited by the idea of being able to make their iPad look like their childhood notebook?

Back-to-school time may not be for another month or so, but in honor of Throwback Thursday, we're taking a stroll down school supply memory lane, from wacky writing implements to vintage lunchboxes. How many of these backpack must-haves did you own growing up?

The very first thing I ever bought with my own money was one of these suckers. It cost $21, and I saved up my pocket money for what seemed like eternity the year I entered first grade in order to get it. It was blue and had red and yellow dinosaurs all over it. Awesome? Heck yes. You can still get ‘em on eBay, too.

2. Along With Those Not-Quite-Mechanical Pencil Things

Y’know — these ones. The ones that involved taking the tip off when it wore down and shoving it up through the bottom of the pencil, pushing a brand new tip up to the top in the process. Do these things have an actual name?

Especially if they came with matching thermoses.

Trapper Keepers, so named because the folders they held were called “Trappers,” first burst onto the scene in the ‘70s; they would go on to become school supply staples for kids everywhere in the ‘80s and ‘90s (I definitely had one that looked like the one pictured here). They’re still around today, albeit with a magnetic closure instead of a Velcro one. Raise your hand if you’re totally getting one of those Trapper Keeper tablet cases the minute they drop!

Like the mechanical pencil cases, you can still find Yikes! pencils and erasers on eBay — although you’ll have to shell out a not insubstantial amount to get your paws on ‘em. The set pictured here has a Buy It Now price of $85. Yikes, indeed.

Stickers. Pens. Pencils. Folders. Notebooks. Whatever. It didn’t matter. We had to have them. I learned later on in life that there were all sorts of wacky controversies surrounding the brand and its history (see: Jezebel’s excellent post “Inside the Rainbow Gulag: The Technicolor Rise and Fall of Lisa Frank”), but in the late ‘80s and early ‘90s, I lived for that stuff. Anyone else?

Ah, the sweet smell of art class! These scented markers have apparently been around since the ‘60s; they look a little different now than I remember, but they’re just as big a hit with kids today as they were back then.

After we aged out of Mr. Sketch markers, other whimsical writing implements took their place. What made these pens so much cooler than regular ballpoint pens is that they usually had at least four colors in them — and some even had as many as 10. Of course, they also broke easily, but who cares? 10 COLORS IN ONE PEN. It’s magical!

Then, after we broke too many of those magical multicolored ballpoint pens, we moved on to Gelly Rolls. I credit my first Gelly Roll — a green sparkly one — with inspiring my lifelong preference for ink pens over ballpoints.

More like this
American Girl Doll Memes Are Going Viral On Instagram & Tiktok
By Emma Carey
Taco Bell Announced A Crunchwrap & Tostada Made With Cheez-Its
By Emma Garza
All The Sneaky Lindsay Lohan Movie Easter Eggs In Her New Ad, Explained
By Stephanie Topacio Long
S Club 7’s Jon Lee Continues To Reach For The Stars
By Rachel Mantock
Get Even More From Bustle — Sign Up For The Newsletter