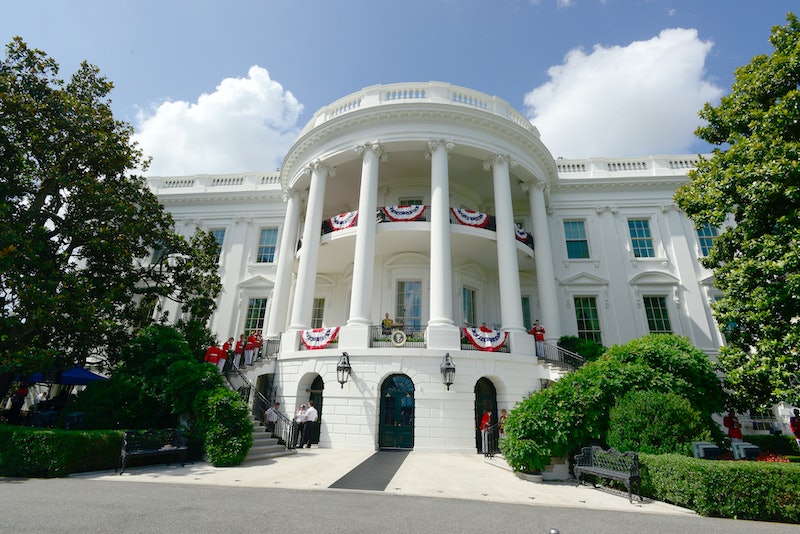 How much is a White House employee's salary? Well, according to the annual report on employee salaries released by the Obama administration on Tuesday, it depends on your gender. The average male White House employee earns about $88,600 — 13 percent more than an average female employee, who earns approximately $78,4000. The gender gap is very much present in the White House, along with the rest of the United States: Women working in the White House tend to earn 88 cents for every dollar that men do.

Not to say that the Obama administration hasn't made pay equity a central cause this year. The president has certainly pushed for increasing the minimum wage with hopes it would benefit women, and pushed the passage of legislation that would provide women with opportunities to compare their wage to their male peers. That said, there hasn't been much progress inside the White House itself.

For instance, the 2009 annual report to Congress reported that male employees earned approximately $82,000, while females earned $72,700 — another huge gap. Of course the salaries within the White House range, just as it does in most workplaces. The highest paychecks are $172,200 (given to an assistant to the president), while the lowest is $42,000. The deputy director of Michelle Obama's Let's Move! initiative, Elyse Cohen, as well as Nathaniel Loewentheil, a policy adviser, make nothing.

White House Press Secretary Josh Earnest couldn't have said it any better. He acknowledges that “we still have more work to do” to close the pay gap, adding that there will be “some improvement to make along that measure.” He did emphasize that those with the same title make the same amount (hallelujah!) and we applaud his recognition that the White House is doing better than the country is more broadly. So then, what's the key discrepancy between pay? Men still tend hold the higher-paying senior jobs.

Thank you, President. But how often have we heard talk of the gender wage gap? In fact, while at a townhall event in Pittsburgh, Obama commented on the issue.

This is not a women's issue, this is a family issue. Women now bring in close to half of all income, and there are a whole lot of families out there where the woman is the primary breadwinner. And if Michelle is not being paid fairly, then that's not helping me. I want her to get what she rightfully deserves. I want her being paid the same as a man doing the same job, because that is helping our family.

More like this
34 Quotes That'll Inspire You On Juneteenth & Beyond
By Syeda Khaula Saad and Siena Gagliano
How To Fight For Reproductive Rights, Based On How Much Time You Have
By Courtney Young
5 Ways To Stand In Solidarity With Women In America From The UK
By Sophie McEvoy
The Most Powerful Photos From The Weekend’s Abortion Rights Protests
By Melanie Mignucci
Get Even More From Bustle — Sign Up For The Newsletter