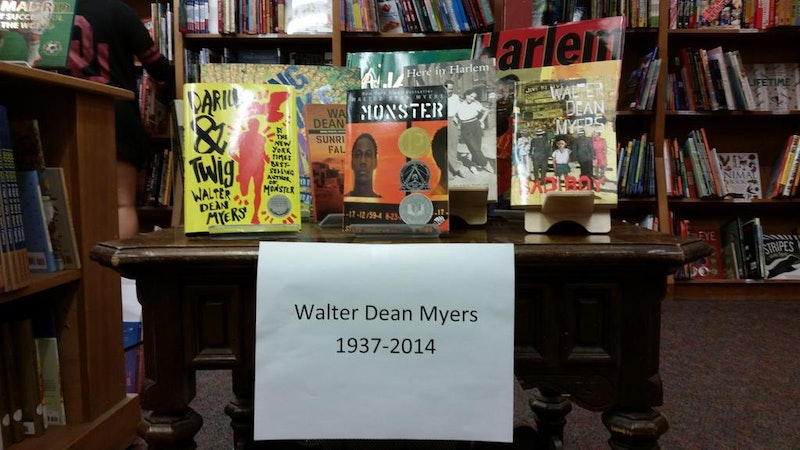 The world of literature has suffered a great loss: YA author Walter Dean Myers has died at age 76. Myers was the author of award-winning favorites like Monster and Slam, teen fiction that fearlessly captures the rougher realities of growing up.

Myers was a virtuoso at connecting with young readers, gifted at crafting deft, relatable characters faced with tough decisions. In his nearly 45-year career, he composed more than 100 children’s books for varying ages. His body of work spans fiction, nonfiction, poetry, and memoir, and his award catalogue is extensive. Myers wrote two Newbury Honor books and three National Book Award finalists, and he also received five Coretta Scott King awards for African-American fiction, a Margaret A. Edwards Award for lifetime achievement, and the first-ever Michael L. Printz Award. Yes, that deserves a "wow."

Born in Martinsburg, W.V., Myers was later adopted and raised in Harlem where he spent most of his childhood on the basketball courts or in the local library. Though he was a recognizably skilled writer in high school, he eventually dropped out and enlisted in the army at 17. Lucky for us and for the world of children’s lit, though, he would later turn his personal experience into a promising career as a best-selling author. And indeed his writing is all the more powerful in that it is informed by much of his own adolescent struggles.

“I had an advantage in that I lived through all this stuff and have been able to think about it and to consider it. Why did I go in one direction, while these kids may or may not go in that direction," Myers told the Huffington Post in an earlier interview.

"He does a great job of engaging teens because he writes about things they want to read about, whether it's going off to war or surviving the streets," Kimberly Patton, president of the Young Adult Library Services Association, told the Huffington Post. "He doesn't talk down to teens. He always reaches teens on their level."

Aside from engaging readers on the page, Myers was also known for his desire to infuse young readers with a passion for literature. He clocked in endless hours visiting schools, libraries, prisons, and juvenile detention centers to chat with readers in person about his work, offer wisdom from his own experiences, and encourage literacy.

“Walter often wrote books about the most difficult time in his own life — his teenage years — for the reader he once was; these were the books that he wished were available when he was that age,” a HarperCollins representative said in a statement.

In his young adult novels, Meyers wasn’t afraid to take on the riskier subjects, from gang violence and incarceration to drug addiction and war, dark themes he rendered with nuance. His works are filled with bold, multi-dimensional characters whose stories give voices to the oft silenced and misunderstood teen. He hoped his books would help teens make sense of their own young struggles and continue seek out more novels like them.

"Walter Dean Myers was a compassionate, wonderful, and brilliant man. He wrote about children who needed a voice and their stories told,” Myers's literary agent Miriam Altshuler said in a statement. “His work will live on for generations to come.”

Though Myers is gone, his literary legacy will certainly continue to live on through his young fans and the grown-ups who will never forget his stories (count all of us in there). Fans have taken to Twitter to express the many ways Myers inspired them:

Haven't read a ton of Myers? There's a lot to sort through, so here are five of his best to start with: