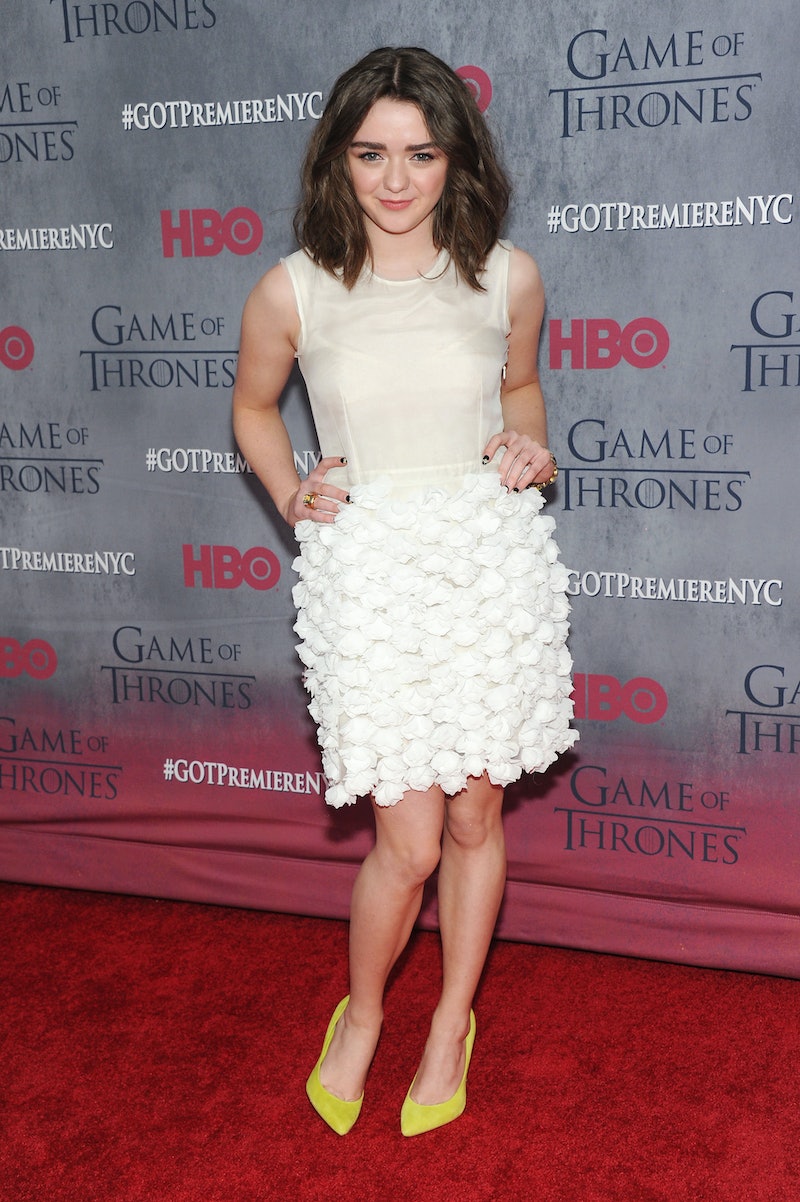 You know her by the blunt cut of her short hair, her dirt-stained skin, and a small blade she pushes through the heart of her enemies, but Maisie Williams — who plays Arya Stark on the beloved HBO show — is not her Game of Thrones character. "People think I'm going to pull out a sword and stab someone," the 17-year-old UK native told Bustle.

"But Maisie isn't quite as cool as the characters she plays. Maisie is kind of a wimp really," she said. "I'm scared of spiders and say really embarrassing things. I'm never really going to be that perfect girl so I'd rather just play these cool characters instead."

While she's well-known as the HBO show's resident badass, she'll take on another "rough and tumble" roll in Friday's Heatstroke, where her character attempts to survive the South African elements while being tracked down by muderous poachers.

"We shot it about two years ago, so I was still very new to the industry. I was really excited about the fact that I could go to South Africa. Before I started acting, I'd never even been to London. I'd never been out of my home town. That was the thing that really drew me to it," she said. "And the fact that another casting director enjoyed what I did. Anyone can land their first role, to then go on and do something else was really, really exciting for me. It was a moment where I thought I could do this for the rest of my life."

Her teenage character in Heatstroke is eerily similar to her famed Game of Thrones gal. They are both independent, strong female characters thrust into unlikely circumstances who are inevitably being hunted down by evil men. "I didn't really plan that," Williams admits. "It would be fun to play something else, but it's just not me. I will continue to play these strong, female, rough and tough characters for as long as I can."

For Heatstroke, Williams had a dialogue coach with her on set, as it was her first time using an American accent. "The first time I've done an American accent in anything that wasn't just messing around at home. In the UK, the American accent isn't something that's massively foreign to us. A lot of our TV shows are from America, we have How I Met Your Mother, Big Bang Theory, Family Guy, The Simpsons..."

Imagining Arya Stark with a bowl of popcorn watching American television is a hilarious image, but the actress herself is always up for a good time. She recently got back from attending Glastonbury Music Festival which is just down the road from her UK home.

"Because I'm in Game of Thrones I could have had a special hospitality VIP ticket and I could have camped in one of the special camps and gone backstage, which is all really great, but that's not a festival," she said. "I don't see that as being as fun. So I camped with everyone else and I was getting recognized quite a lot but that's just the way it goes now. I'd rather be in the middle of a massive crowd watching The Black Keys than be backstage with some people who paid lots of money for their tickets. It's just not me."

So who did Williams see? Her favorite was "Sing" singer Ed Sheeran. "I'm a massive, massive, fan," she said. "I managed to get to the front for Ed Sheeran. I was on my friends shoulders and I actually got on TV so that was really exciting. I know that sounds pretty stupid, I'm on TV a lot, but it was exciting to be on TV as Maisie rather than as Arya."

Outside of attending music festivals, hanging out with friends, and enjoying some of the summer's best blockbusters (she's crazy about The Fault in Our Stars) the actress is currently studying to pass her driver's test. "I passed my series. In the UK we have to do a written paper before we're allowed to take the actual driving test. So I passed my written paper, which is good because that was the bit I was most nervous about," she confesses.

But nervous is hardly a adjective we can apply to the seemingly fearless teen. Williams social media presence shows she's tuned into the "real world" and always game for a laugh. A gif of the actress busting some seriously impressive moves recently hit the interwebs, and when asked about the image, Williams simply laughs.

"That dance was from a routine I did ages and ages and ages ago with my dance school. People seem to quite like it and I find it pretty goofy," she said. "I've always been dancing, that was me messing around but it would be great for people to see me actually dancing. But until that day, we have that three-second gif."

More like this
15 Photos Of The 'House Of The Dragon' Cast At The Show's UK Premiere
By Radhika Menon
Gwendoline Christie’s Partner Is Part Of Royal Family History
By Parry Ernsberger and Sophie McEvoy
Netflix Just Rebooted A Classic ‘90s High School Drama
By Maxine Harrison
Every Horror Movie Reference In The 'PLL: Original Sin' Premiere
By Alyssa Lapid
Get Even More From Bustle — Sign Up For The Newsletter