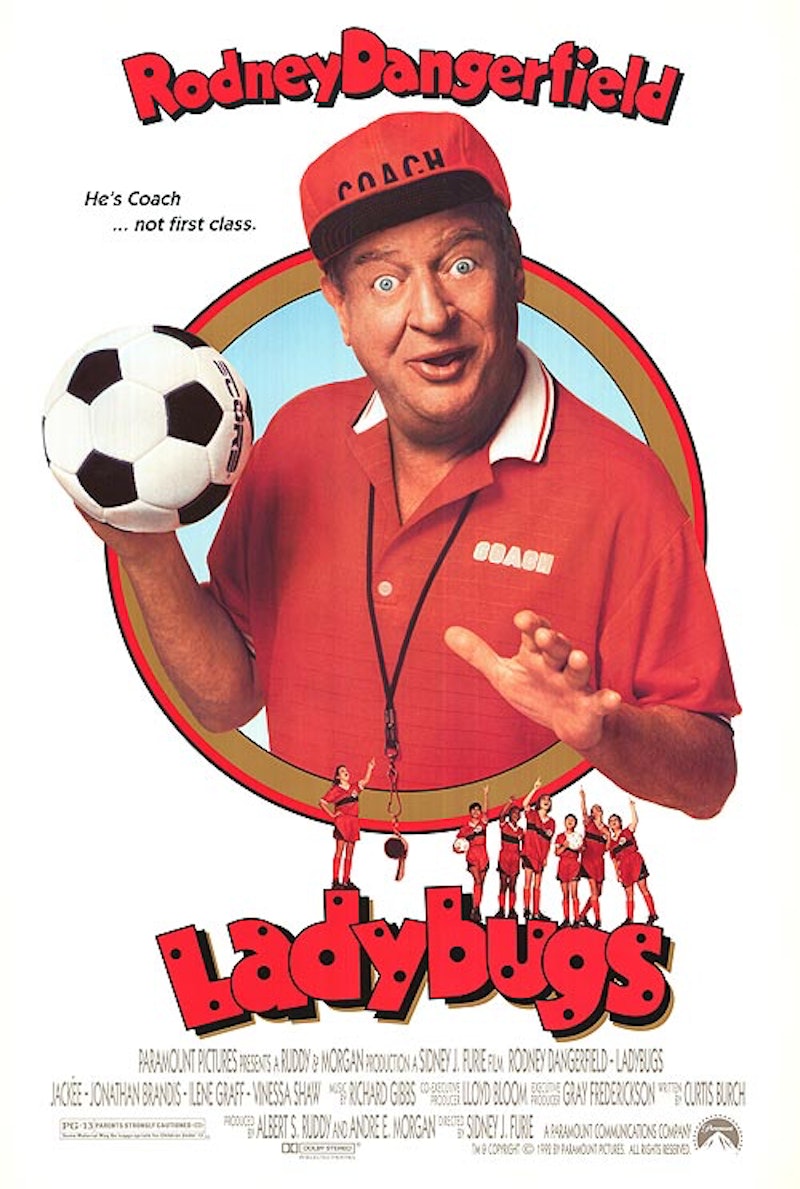 When I was a kid, my mom had a TV with a VHS player in her car to keep my sister and I occupied on long car rides. For some reason, the only VHS we kept in the car was that of the 1992 Rodney Dangerfield vehicle Ladybugs, the first PG-13 movie I was ever allowed to watch. I don't know why this was the case. We had plenty of other movies. But Ladybugs lived in the car, and every time we took a road trip, we'd watch it over and over again. Our parents must have heard it a hundred times. Of course, this was 16 or so years ago, so I'd long since forgotten about Ladybugs, until I wrote this article on Monday.

"Oh yeah," I thought. "Ladybugs. I wonder if that holds up."

Well, it turns out the whole movie is on YouTube, available to rent for the low, low price of $2.99. So I did it. I rented and watched Ladybugs. I present now, for your nostalgic pleasure, my findings on this aggressively mediocre film. Keep in mind that all of this is prefaced with the acknowledgement that Rodney Dangerfield was a national treasure, and without a doubt one of the best joke writers/stand-ups in comedy history, and, because I know how much it meant to him... I mean no disrespect.

Rodney Dangerfield is a salesman at a company called Mullen Industries, which does ?????, and also owns a girl's soccer team. It is never explained why, nor is there any plausible explanation I can think of. Everyone in this movie is just charmed to death by Rodney Dangerfield and loves him immediately no matter what. At one point, he tells an old lady receptionist all the ways he'd like to fuck her, and even though he's apparently about to marry a woman named Bess, this is meant to be a highly endearing moment.

Rodney Dangerfield's Boss, Mr. Mullen, is married to a woman who will only sleep with him if said soccer team wins, because their daughter is on the team and they don't want her to be a loser.

Rodney Dangerfield wants a promotion so he'll have enough money to marry Bess, who has a teenage son, Matthew, who doesn't like Rodney Dangerfield very much. It is also worth nothing that Matthew is played by the (tragically late) Jonathan Brandis, who I had a mondo crush on when I used to watch this movie in the back of my mom's car. Matthew is a star soccer player, but he is doing terribly in school, a fact which is mentioned once and then I guess everyone worrying about it.

Rodney Dangerfield goes to his boss's office to try and get that big promotion, but Boss Mullen is more concerned about getting a new coach for the company's teenage girl soccer team (?) so his awful wife will sleep with him. Seeing an opportunity for an in with the boss, Rodney Dangerfield lies and says he is great at soccer, which his boss immediately believes, despite the fact that Rodney Dangerfield looks very unhealthy.

The next day, Rodney Dangerfield and his assistant, Jackée Harry (the mom from Sister Sister) start coaching the Ladybugs, a ragtag team of girls who have never played soccer before. Rodney Dangerfield and The Mom From Sister Sister never again set foot in an office, because I guess a teen girl soccer squad is much more important than whatever Mullen Industries does? Again, they NEVER TELL US WHAT MULLEN INDUSTRIES DOES, so:

After an absurdly long time, Rodney Dangerfield eventually puts together that he's got a bad soccer team, and a future step son who's really good at soccer, so he disguises Matthew as a girl named Martha (which entails giving him a wig just slightly longer than his actual hair) and puts him on the team. Matthew is initially hesitant, because "EW, BOYS DON'T DRESS LIKE GIRLS" (a commonly used comic touchstone in this movie, which we're going to have to let slide because it was 1992), but agrees when he realizes that Kimberly Mullen, Boss Mullen's daughter and the object of Matthew's affection, is also on the team.

He realizes this in a sequence that finds the 14-year-old-ish Kimberly in a bikini running towards him in slow motion, and it's exactly as creepy as it sounds.

There is nothing else I can tell you about this movie that will surprise you even a little bit. Rodney Dangerfield bonds with the team, realizes that making them happy is more important than his job or winning, he wins over his step son; Jackée makes some sassy comments and has banter with Rodney Dangerfield that is occasionally uncomfortable in its casual racism; a lot more jokes are made that imply Rodney Dangerfield is a pedophile than I remembered; eventually people find out Matthew is a girl (shocker, his disguise is literally worse than Clark Kent's); the team comes together to win; the end.

Point is, it doesn't hold up so great.

It's not so much a movie as it is a series of set-ups for Dangerfield's punch-lines, some of which are good, a lot of which are dated. Most of the movie relies on jokes about how funny it is that someone with a penis is wearing a dress. Boof. The only thing good about this movie is the fond memory I have of watching it with my sister in the car. In that way, it did really did its job.

The rest kind of sucks, though. Big time.