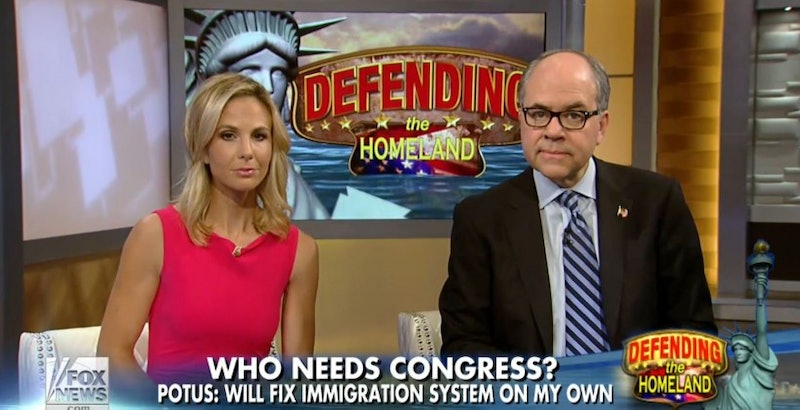 Fox News' new immigration segment, "Defending the Homeland" on Fox & Friends, came with a new logo Wednesday that caught the attention of gamers everywhere. Because that "Defending the Homeland" logo on Fox looks just like BioShock Infinite 's logo. But don't worry, Fox, they aren't mad — the creators of the game are just wondering how on earth Fox missed the irony.

The game, which released last year, is the third installment in the BioShock series. Basically, you fight your way through a flying city ruled by a religious nut who uses hyper-patriotic images to disseminate an idea of American superiority, rallying the city to fight anyone who isn't a part of it.

Now, Fox "fair and balanced" News isn't always known to stick with its slogan. I think it's safe to say that the network leans a little right of center. The AV Club's Sam Barsanti found a beautiful comparison to help you find the link:

At the risk of saying something overtly political, we’ll just let you make your own connections between the flying city using patriotism to push people into war and the TV network that paired footage of the U.S. bombing Iraq in 2003 with a waving American flag.

Game creator Ken Levine seems amused rather than gearing for a lawsuit. He posted on Facebook, "Glad to help, Fox. Glad to help."

Last year the Tea Party, without a scrap of irony, used images from the game on their Facebook page in order to depict a separatist world that, unfortunately, they actually want. With Fox the lines were a little more blurred. We won't rank them on Tea Party levels of conservative, but the idea that they idealized a world of flag-waving patriots that the liberals haven't screwed up is, admittedly, pretty funny.

So how did the conservative-pegged news outlet work out that it would be a good idea to emulate a game about crazy right-wingers? Absolutely no clue. My guess is that an intern just got in the ultimate troll, and has subsequently been sent back to their parents basement for the rest of the summer. That, or the entire design staff over at Fox News is hopelessly clueless. Regardless, the Internet got a good dose of patriotic irony heading into the holiday.