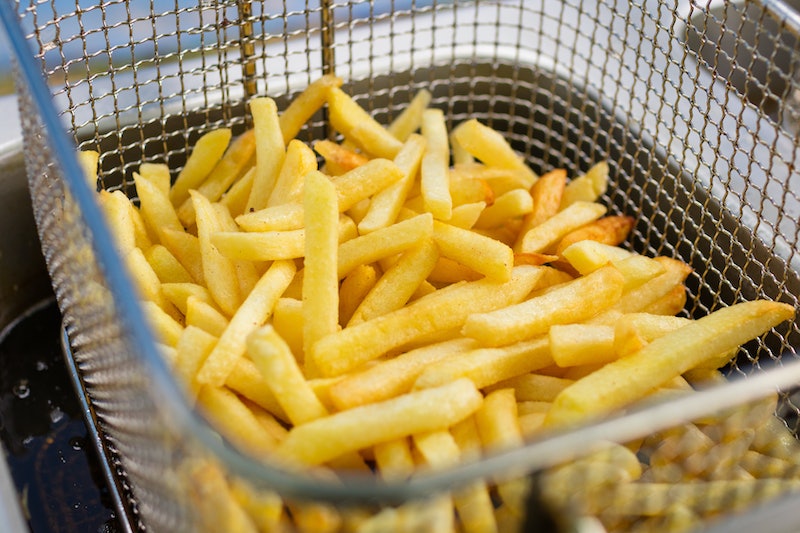 Bad news, coffee-, fried potato-, and other browned food-lovers of the world: According to a new advisory by the European Food Safety Authority, all of the above — pretty much anything that browns when it’s fried or roasted, in fact — might have the potential to increase the risk of cancer. Perhaps most frighteningly of all, this category of food includes some baby foods. Uh… yikes?

The draft of the bulletin confirms that a chemical called acrylamide, which is produced by the same chemical reaction that browns food (thus making it tastier), poses all kinds of health risks. Some of them aren’t huge concerns based on current levels of dietary exposure; as such, even though the fact that acrylamide can screw with your nervous system, pre- and post-natal development, and male reproduction sounds scary, we don’t actually have to worry about them too much. However, the cancer thing is a little troubling. “Acrylamide consumed orally is absorbed from the gastrointestinal tract, distributed to all organs, and extensively metabolized,” explained Dr. Diane Benford, chair of the CONTAM panel, in a press release. “Glycidamide, one of the main metabolites from this process, is the most likely cause of the gene mutations and tumors seen in animal studies.”

So: How worried should we be?

It’s worth noting that Dr. Benford also stressed, “So far, human studies on occupational and dietary exposure to acrylamide have provided limited and inconsistent evidence of increased risk of developing cancer.” Additionally, although people exposed to acrylamide in an industrial setting have, in fact, developed some nervous system problems — weak muscles, etc. — it actually has very little to do with what they ate. Said Marco Binaglia, a scientist who helped draft the EFSA report, to TIME, “That was through skin exposure to high levels of acrylamide, not food consumption.” Furthermore, scientists just don’t know enough yet to make specific dietary recommendations. Said Binaglia, “We’ve identified a possible model of action that explains how acrylamide could damage DNA in a way that leads to cancer-producing cells”; however, we need to study it a heck of a lot more in order to make actual food recommendations.

The deadline for the final adoption of the opinion is June 2015 — but bear in mind, too, that we’re talking about Europe here. As Shape points out, the U.S. has its own ways to regulate our exposure to acrylamide — for example, the Environmental Protection Agency regulates it in our drinking water. We don’t have any guidelines here yet concerning acrylamide in food, but you can cut down on your exposure to it by decreasing cooking time and consuming a well-balanced diet of fruits, veggies, whole grains, and so on. So, don’t freak out yet — but just be aware that this is going on. Stay healthy!

More like this
An Honest Review Of The TikTok-Famous WalkingPad
By Kaitlyn Wylde
Doja Cat Needed Tonsil Surgery & Now She Can't Eat Taco Bell's Mexican Pizza
By Jake Viswanath
How To Protect Your Digital Privacy If You Need An Abortion Post Roe v. Wade
By Kaitlyn Wylde
Heinz Is Selling A Sprayable Mayo Mousse
By Maxine Harrison
Get Even More From Bustle — Sign Up For The Newsletter