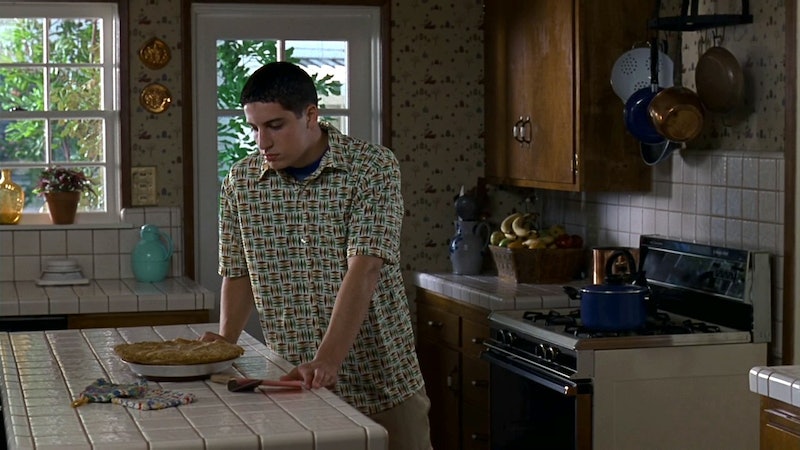 It's Fourth of July weekend, folks, and you know what that means: time for all things America. And what could be more American than pie? I mean, it's so American, that apple pie has an entire cliché built around just how American it is. And it's certainly our most beloved kind of dessert food — sure, you have your cakes at weddings and birthdays and an occasional cookie here and there, but pie will always have our hearts. A delicious, flaky crust makes the base for a diverse selection of fillings, whether it be apple, cream, berry, pecan, or pumpkin pie. What's more American than a dessert that can feature peach, blueberry, and more in a delicious melting pot of crust?

In fact, pie is so American that it's influenced American cinema and television. Some of the biggest and most thoroughly American scenes from film and television are laced with the delicious scent of pies — the good, the bad, the cherry, the apple, the sweet, and the weirdly sexual. So follow us on a tasty journey through some of the most American pies in film and television. After all, as the saying (that I just made up) goes: If you can't eat 'em, watch 'em.

You knew this was coming as soon. Yes, this is the famous scene in American Pie in which nervous Jim actually gets it on with a pie. It's awkward, it's embarrassing, it's an embellishment on the eager confusion most American teenagers have about sex.

During the scene in which Travis Bickle sits down with Betsy, he orders an apple pie with a slice of melted cheese on top — the same thing that serial killer Ed Gein ordered in jail. And sadly, serial killers are a pretty American phenomenon.

Waitress is a movie about a woman trying to make herself a new life out of her broken one, one pie at a time. So really, just pick any scene to have a perfect American pie scene, whether it be the "Baby Screamin' Its Head Off in the Middle of the Night and Ruining My Life" pie or the "I Can't Have No Affair Because It's Wrong and I Don't Want Earl to Kill Me" pie.

An American fairy tale with a theme of pies running through it, hero Ned "bakes pies and wakes the dead."

A classic coming-of-age tale (plus a mysterious dead body) takes an interesting detour with the story of Lard Ass, who enters a pie contest only to vomit it all back up on the people taunting him.

This surreal show's retro '50s aesthetic is defined by the classic American diner that acts as a town meeting place for Twin Peaks. And the diner would be nothing without its cherry pie, the "best in the tri-counties." Any coffee to go with that, Agent Cooper?

This movie about America's fraught battle with racism wasn't exactly perfect. But, the scene about Minny's special brand of "humble pie" was perfectly delicious.

You'll have to watch the whole episode for this scene. But in one of the most groundbreaking shows for women on American television, the climax of the episode in which Fred and Ricky buy a diner ends in (of course) a pie-throwing fight.