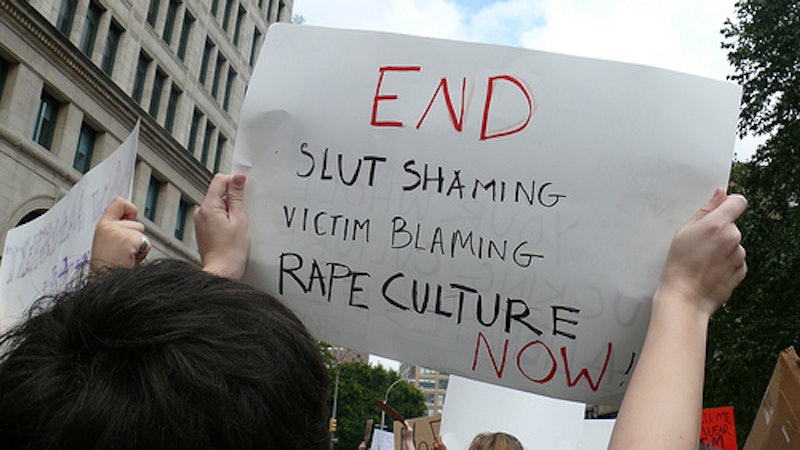 John Fugelsang (an actor you might remember from Coyote Ugly) lays it down in regards to condemning slut-shaming on his Current TV show Viewpoint.

"We are now though, my friends, in the golden age of slut-shaming—a time when the culture, the media and the men demand women sexualize themselves to prove their value to society, but then punish those women if they dare to actually enjoy it."

If you're entrenched in the land of online feminist and female content, like I am, you're likely aware of the huge problem of slut-shaming. It's certainly been gaining leverage in the last few years, with the advent of SlutWalks and increased media attention, both on condemning slut-shaming and, of course, by perpetuating it in troubling ways. Kristen Stewart was slut-shamed in the media after cheating on Robert Pattinson and Taylor Swift is constantly being taken to task for her dating life. Those are just a few examples of highly privileged celebrity women who are criticized for their sexuality, but let's not forget Rush Limbaugh's offensive slut-shaming of graduate student Sandra Fluke, the vicious online attacks on the Steubenville rape victim, and (in Fugelsang's own example) the three women who were held captive by Ariel Castro for years in Ohio. Fugelsang's explanation of what slut-shaming is, how it works, and how it hurts women (and men) is rapid-fire, rapier and really awesome:

"It's used to smear rape victims, women who want birth control, women who like sex as much as men or just women who choose to have agency over their own intimate lives. Retrograde hypocrisy, usually perpetuated by males who crave female sexuality, as long as they can control it."

Current's political show Viewpoint has been hosted by Fugelsang for just a few months now. This is the first time I've seen it, but if Fugelsang's going to keep putting out badass feminist segments like this one, Viewpoint may have just gained a new viewer.

More like this
10 Organizations To Support On Latinx Women's Equal Pay Day
By Caroline Burke and Mia Mercado
Here's How To Support Jewish People Amid Rising Antisemitism
By Hannah Orenstein
Emily Ratajkowski & Pete Davidson's Astrological Compatibility, Revealed
By Nina Kahn
MOBO Awards Found Kanya King On The Woman Whose Grit & Determination Spur Her On
By Kanya King
Get Even More From Bustle — Sign Up For The Newsletter