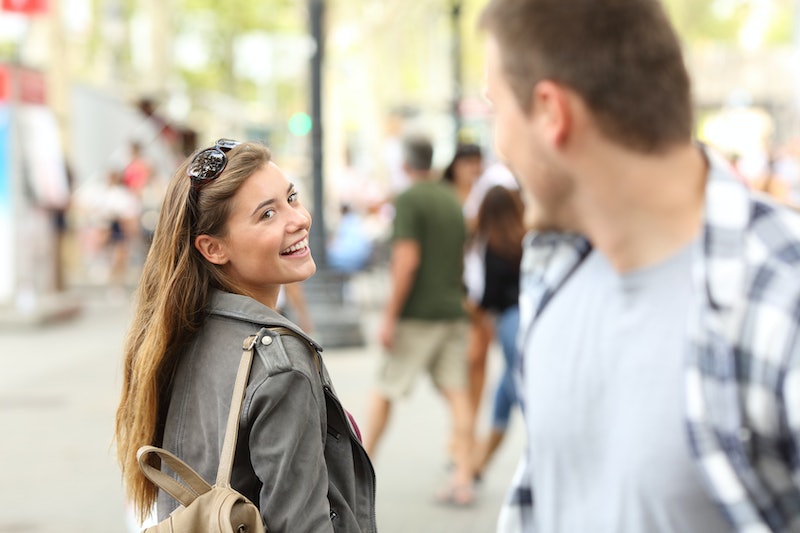 Have you ever been in a situation where you had no idea someone was flirting with you until way after the fact? Or have you ever found yourself flirting with all your might with that guy or gal at the bar, only to have your efforts go seemingly unnoticed? Well, there’s a reason for that: We’re all really, really bad at figuring out when we’re being flirted with. Here’s the science to back it up:

Associate professor of communication studies at the University of Kansas and author of the book The Five Flirting Styles Jeffrey Hall recently conducted a study to determine our rate of success when it comes to identifying whether someone is flirting with us. First, he brought together 52 pairs of single, heterosexual college students and told them they’d be participating in a study on first impressions (sneaky!); then he had each pair chat together alone in a room for 10 to 12 minutes. Lastly, he split up the pairs and had each student fill out a questionnaire, asking them whether they flirted with their partner and whether they thought their partner had flirted with them.

The good news is we’re actually pretty adept at knowing when someone isn’t flirting with us: The students displayed an accuracy rate of over 80 percent when it came to identifying non-flirting behavior. But when the students were asked to identify whether they were being flirted with, only 36 percent of the men and 18 percent of the women judged the behavior correctly. Why? Likely because we’re being too subtle. “Behavior that is flirtatious is hard to see, and there are several reasons for that,” Hall said about the study. “People aren’t going to do it in obvious ways because they don’t want to be embarrassed, flirting looks a lot like being friendly, and we are not accustomed to having our flirting validated so we can get better at seeing it.”

The one big problem with this study is the fact that it focused exclusively on heterosexual couples. Subsequently, we can’t yet say whether flirting so often fails because we suck at reading opposite genders specifically, or if it’s because we just suck at reading people in general. I’d be interested to see further research broaden out a bit to include the entire spectrum of relationships — but in the meantime, I think it’s probably safe to say that everyone could stand to spell out their intentions a little clearer. Just, y’know, don’t verge into creeper territory. Nerdy dating guru Dr. Nerdlove has some excellent tips on how to avoid creeping; yes, the site is generally geared towards men, but the pieces of advice contained within are often good ideas for anyone to follow, not just dudes. Now go forth and flirt!