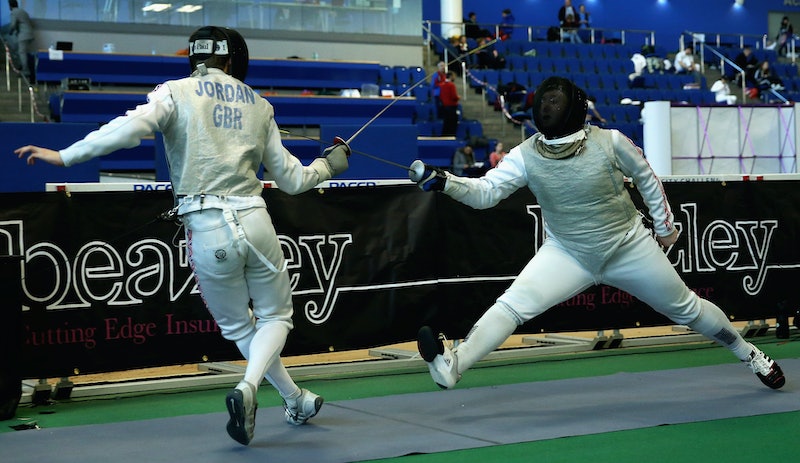 For eight years, my life revolved around clashing blades with skilled opponents. Decked out in white gear and a mask, I became used to the feel of a weapon in my hand as I moved up and down a strip, thrusting, parrying, and riposting as I worked to stab my competitor before being hit myself. While I usually lost no blood, I always put up a fight. Fencing is my sport.

So you can imagine my frustration when I spent countless hours training every week to develop muscle, discipline, and calluses only to hear time and time again that fencing isn’t a “real” sport. For some reason, fencing is dismissed by most people, viewed as more of an art form seen in swashbuckling movies than a sport practiced in gyms by athletes of all ages.

Some simply don't understand the sport. This year, a North Dakota State University club fencing team was banned from campus because the school considered swords in violation of their weapons policy. But what the school considers the team’s "swords" (referred to as weapons, not swords, in the sport) are not actually sharp on any edges or tips. They are completely blunt, and yet the school never bothered to distinguish them from sharp, dangerous swords.

But we fencers are used to being misunderstood. Here are 32 only we truly understand.

you know people only think about fencing during the Olympics

and that people assume it's not a real sport

Sorry, but has your sport been included in every single modern Olympics?

Fencing shares this honor with only three other sports: swimming, gymnastics, and athletics.

Think throwing or hitting a ball takes skill? Try hitting someone’s torso as they try to stab you

yes, when you succeed and earn a point, there’s no better feeling in the world

fencers get the best of both worlds: individual and team competition

You can fence for individual medals, or when you're part of a team, fence individual bouts that support the overall team score. All for one, and one for all!

if you fence, you certainly work every single part of your body

your mind gets a workout too. Every bout is like a battle of wits

Was your sport derived from a killing art?

but even with a protective tip and blunt blade, you know your weapon isn't a toy

And yes it's a weapon, not a sword. Stop calling it that.

Still, people will ask you a million times if they can "just see" your "sword"

Time #109 is as annoying as the first time. We know you just want to wave it around...

you can love every weapon, but you know eventually, you have to choose a side

foil, epee, or saber. Your choice.

Foil is the best (says the foil fencer).

and non-saber fencers think saber bouts are like this

If you're right-handed, you'll never forget how confusing it was the first time you fenced a lefty

And if you're left-handed, you'll never forget your advantage

You're proud of every bruise and celebrate each one

And while the price of equipment makes you do this...

Finally owning your first weapon or pair of shoes makes you do this:

You even love the knickers!

Of course, for some reason, fencing’s legacy still gives it a reputation of being gentlemanly

Not tough enough to be a real sport, huh?

but you know that while you may be polite, shaking hands, and saluting your opponents…

...You’re aggressive during competition. When you hit, they know.

That will leave one epic bruise.

And have I mentioned the screaming?

Or the running, jumping, dodging, and ducking?

We're aggressive because a bout only lasts 4 minutes. Can you win your match that quickly?

In that time, we need to get five touches to win. For direct elimination, bouts are divided into three bouts of three minutes until someone gets 15 touches. Not many sports can be played so quickly.

second only to a bullet, a fencer’s blade is the second-fastest moving object in sports

Almost faster than a speeding bullet…

Face it. fencing is everything you dreamed about since you were a kid

I may have owned one too many lightsabers.

i mean, Even if we just have utensils on hand, we can give you trouble

It’s all about the accuracy!

and most of all, if you fence, you know: those ideas about fencing not being a sport?

More like this
Why You're Seeing Green Bandanas At Abortion Rights Protests
By Lexi Inks
Eleven From ‘Stranger Things’ Is A Cancer Zodiac Sign, An Astrologer Says
By Brittany Beringer
How Getting An Abortion Has Changed From The ’60s Through Today
By Amanda Chatel
The Most Powerful Photos From The Weekend’s Abortion Rights Protests
By Melanie Mignucci
Get Even More From Bustle — Sign Up For The Newsletter