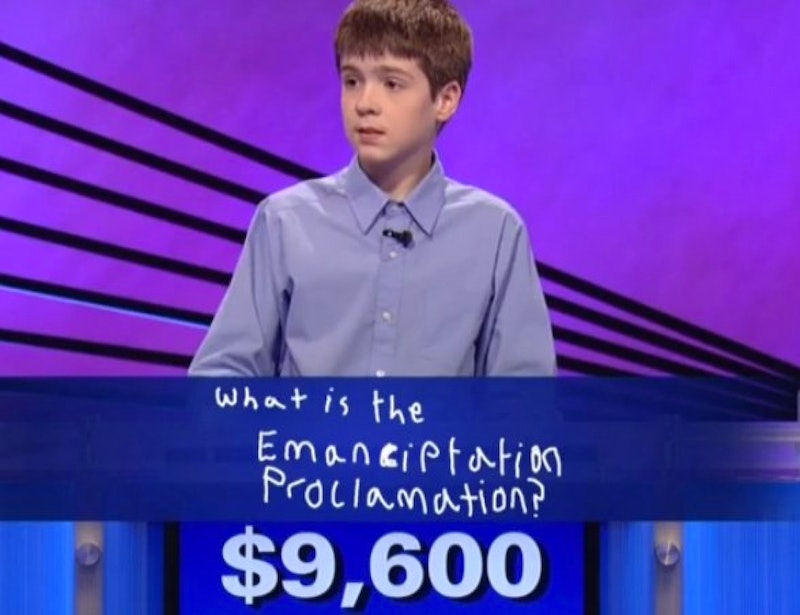 Over the years, we've had several bones to pick with Jeopardy!. First, there was the series' insistence that Ken Jennings' question to the answer "This term for a long-handled gardening tool can also mean an immoral pleasure seeker" — "What is a hoe?" — was incorrect. (Yes, "rake" might be the more accepted answer, but Jennings didn't get it wrong.) Then there was their penalization of the contestant whose question to the answer, "A blow to the back of the neck is the punch named for this animal" was "What is a donkey?" Also a correct answer, but Jeopardy! doesn't go by Urban Dictionary's standards.

But now comes the hardest Jeopardy! question to answer: Should Trebek and the long-running game show series have rewarded the young contestant who got the "Final Jeopardy!" question right, but spelled it wrong?

Twelve-year-old Thomas Hurley III appeared on the game show and could have reeled a significant amount of cash — if only he hadn't spelled "Emancipation Proclamation" incorrectly, voiding his correct answer. (Hurley spelled Abraham Lincoln's history-making piece of legislation "Emanciptation Proclamation.") Complicating the matter? The fact that Hurley hails from Newtown, Conn., the site of the second-worst school shooting in history at Sandy Hook Elementary.

So there's little doubt that Hurley is fielding much sympathy, especially after the 12-year-old said he felt cheated by the final Jeopardy! verdict: "I was pretty upset that I was cheated out of the final Jeopardy! question ... It was just a spelling error," he told The News-Times of Danbury, Conn. Regardless of the backlash, the series is standing by its ruling — producers said in a statement, "If Jeopardy! were to give credit for an incorrect response (however minor), the show would effectively penalize the other players. We love presenting young people as contestants on our show and make every effort to be fair and consistent in their treatment."

On the one hand, Jeopardy! should be strict in its policies — otherwise, it would be that much easier for "I <3 Boobs" to be an accepted answer:

But, watching Hurley come so close to answering the question correctly, should the student have been penalized for one small error? Or is this whole conversation moot anyway, since Skyler Hornback had an unbeatable $36,600 going into "Final Jeopardy!", eventually setting a Jeopardy! Kids Week record? Watch the video below and judge for yourself!