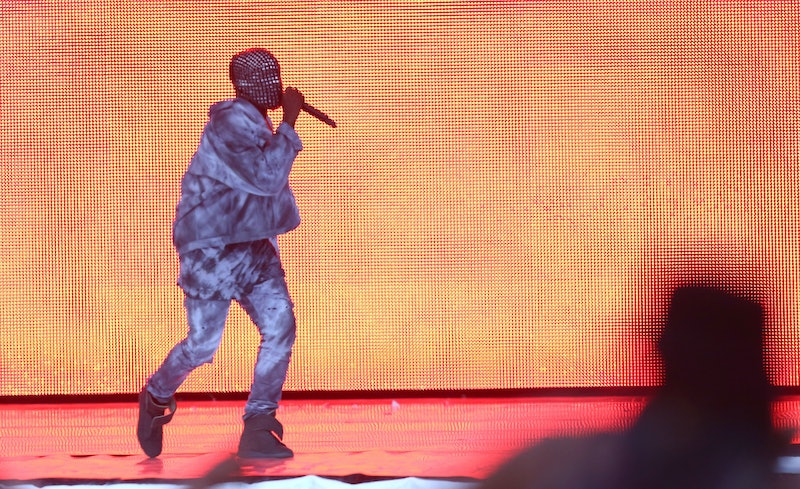 Oh Yeezus, look what he’s done now. For many musicians, taking the stage means being able to do whatever they want with their performance — and, especially if you're Kanye West, that's true even if it means ranting here and there to their fans or (a la Miley Cyrus) even wearing leotards to every show. However, Kanye West giving a 15-minute speech during his concert at the Wireless Festival in London this weekend didn't quite work out well for him — he was apparently booed by concert-goers following the rant, who were probably annoyed that West was wasting the opportunity for at least four or five songs.

The rapper and husband to Kim Kardashian actually began receiving a roar of boos from the crowd Friday, July 4, after stopping in the middle of his show to discuss “consumerism, fame and discrimination in the fashion industry,” according to The Huffington Post. This didn’t stop him from continuing his music, though, despite the obviously dissatisfied feedback given to him by his fans.

The booing was captured in various Vine videos that have popped up on the Internet following the show — and though the booing is quite apparent in the videos, it doesn’t seem like West was phased at all.

Perhaps he thought the audience was agreeing with his reflections by booing the very people and things he was speaking about, or maybe he was using their booing as a part of his so-called performance art. Either way, he doesn’t seem affected.

Or maybe there’s a small part of West crying on the inside because he can’t please his fans, so he’s hiding his sadness behind a literal and figurative studded mask. It could happen, right?

If the singer truly has so much on his mind that he feels the need to put it all out there for thousands of strangers, he should really just write his own book or start a reality show like Keeping Up with the Kardashians. It could be Kanye Keeps Up with the Kardashians, Kardashians 2.0, or Kimmy, Myself and My Ego. Though... knowing West, he’d be likely to sing for 15 minutes of his show and cause TV viewers to riot.

Whatever he does, if anything, he needs to start doing it soon before the world gets fed up with him completely. After all, his fans aren’t just paying pocket money to attend West’s shows. One ticket to see the rapper at this show was £99, and I’m assuming these kids (and I guess adults) aren’t using their money from weeks worth of chores just to hear their favorite singer rant about consumerism.

Pull it together, West!

More like this
Are John Legend & Kanye West Still Friends? The Singer’s Latest Update Is Candid
By Brad Witter
Kim Kardashian Pays Homage To Kanye West’s Fave Film In New Swimwear Pics
By Bustle Editors and Maxine Harrison
Kanye West Has The Most Kanye Reaction To Kim Kardashian & Pete Davidson's Split
By Jake Viswanath
Beyoncé Sent Flowers To “Masterpiece Genius” Madonna After The “BREAK MY SOUL” Remix
By Grace Wehniainen
Get Even More From Bustle — Sign Up For The Newsletter