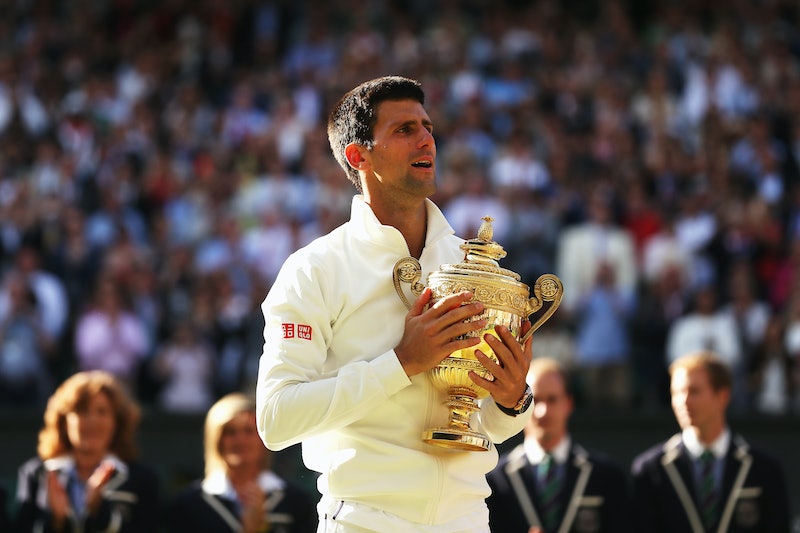 Another sports tournament is over, and this time Novak Djokovic won it all at Wimbledon and nabbed his seventh Grand Slam title to boot. Djokovic beat seven-time winner Roger Federer in five tense sets over nearly four hours on Sunday, winning the tournament for the second time. (In case you were wondering, Djokovic's scores were 6-7, 6-4, 7-6, 5-7, 6-4.)

Federer is a pretty intimidating opponent: he's won 17 Grand Slam titles overall, reached the Wimbledon men's finals nine times, and he once spent 237 consecutive weeks at the top of the men's tennis rankings. For the whole planet. On Sunday, not only was he gunning for a record eighth Wimbledon win, but he also aimed to become the oldest man to win the tournament in the Open Era – just a month shy of his 33rd birthday. Yes, that's apparently regarded as old in men's tennis, considering Arthur Ashe remains the record holder after winning in 1975 at 31 years old.

Federer even beat Djokovic the last time they faced off in a major final, at the U.S. Open in 2007. But even against all that achievement, Djokovic's career is nothing to sniff at. The 27-year-old Serbian now has seven Grand Slam wins to his name, tying him for eighth for all time. More importantly, the win pushed him past Rafael Nadal to claim the number-one spot in the rankings for the first time since September. (Federer will move to the third spot.)

For Djokovic, the win must feel like not only a victory but also a relief, after he lost five of his last six final matches, going back to the 2012 French Open. After accepting the trophy, he dedicated the win to his fiancée and future baby as well as his first tennis coach, who died last year. "I don't know how I managed to do it," he said through tears.