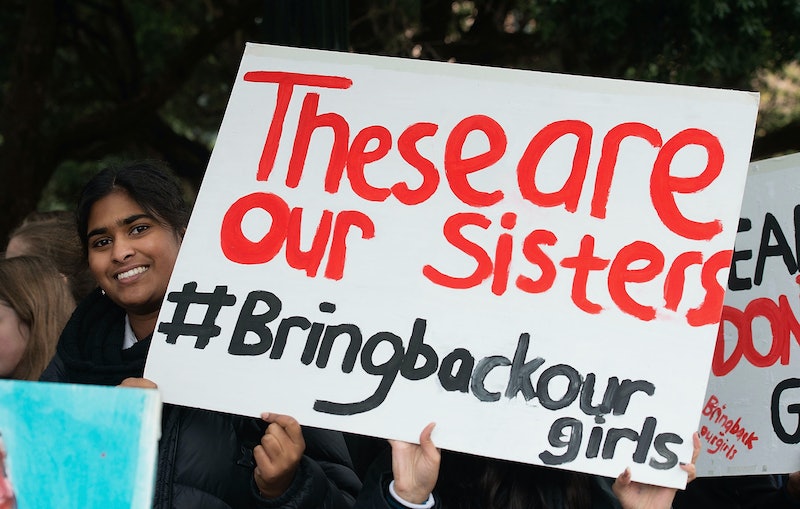 Last Thursday and Friday, more than 60 Nigerian girls and women escaped their Boko Haram abductors, one month after they were captured by the Islamist militants in northeast Nigeria. According to AFP, a local Nigerian vigilante confirmed the escape, claiming 63 girls and women have safely "made it back home." A high-level security official in Borno State, a province in northeast Nigeria, also verified the account.

The Associated Press added that these girls and women were abducted by the insurgents just two weeks ago. About 200 school girls of the nearly 300 who were kidnapped in April are still being imprisoned by the Boko Haram insurgents. The girls were taken from the Government Secondary School in Chibok the night of April 14. In May, Boko Haram leaders announced that they would sell the girls, most of whom were between the ages of 16 and 18.

In a video released by Boko Haram, militant leader Abubakar Shekau said the girls were not supposed to be in school. Boko Haram translates to "Western education is forbidden," and denying education to girls and women is one of the militant group's biggest missions. "God instructed me to sell them, they are his properties and I will carry out his instructions," Shekau said.

On July 3, Nigerian military officials said they have detained a key person who was involved in the kidnapping, according to EuroNews. “One of the informants, one of the key commanders who supplies information to them [Boko Haram] has been apprehended, so something is being done," said Mike Omeri, a Nigerian government spokesman. "We are inching towards it, we are inching towards where we want to go."

The news of the escaped 63 girls and women comes as battles rage on in northeastern Nigeria. According to The Associated Press, at least 50 Islamist insurgents were killed by the Nigeria military in an assault over the weekend.

The militants were allegedly attacking a military base in the town of Damboa in Borno State, but were held off by Nigerian soldiers. However, a Defense Military spokesperson said in a statement that six Nigerian soldiers died in the assault. The attack on the military base was a response to the airstrikes launched on Boko Haram territories just 24 hours earlier, according to The AP.

Over the weekend, the Nigerians in the Diaspora Organization in the Americas (NIDOA) urged Nigerian-Americans to rally behind the Nigerian government and push for the end of terrorism in the western Africa nation.

More like this
Who Is Allison Williams Dating After Her Divorce? She’s Engaged With A Child
By Jake Viswanath
6 Anti-Police Brutality Organizations You Can Support Right Now
By Syeda Khaula Saad and JR Thorpe
Watch Jacinda Arden’s Devastatingly Honest Resignation Speech
By Sam Ramsden
5 Striking Parallels Between Princess Diana & Prince Harry’s TV Interviews
By Catharina Cheung
Get Even More From Bustle — Sign Up For The Newsletter
From hair trends to relationship advice, our daily newsletter has everything you need to sound like a person who’s on TikTok, even if you aren’t.