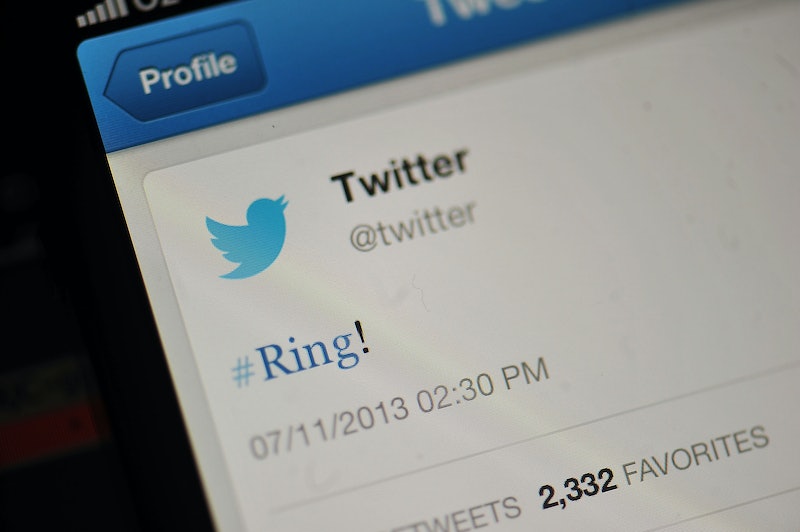 It’s official: we can now add Twitter to the “List of Things That Can Ruin Your Relationship." According to Yahoo Tech, a recent study published in the journal of Cyberpsychology, Behavior, and Social Networking suggests that there is a link between “active Twitter use” and relationship conflict.

For the study, 581 Twitter users aged 18 to 67 were asked to complete a 20-question online survey questionnaire. Clayton specifies that those who participated were asked not only if they had experienced conflict in their relationships as a result of Twitter use, but also if it resulted in breakup, divorce, or, and (this is the good part): “emotional cheating, and physical cheating with a current or former partner.” The good news? Of the 514 participants who qualified for the study (those who have, and were in a relationship with someone who has a Twitter account) 75 percent were still in romantic relationships. #Huzzah

I'm sure we all can agree that this isn’t exactly surprising. We’re all aware of how Facebook can negatively effect romantic relationships. In a 2013 study conducted by Clayton, he explains that a “high level of Facebook usage is associated with negative relationship outcomes, and that these relationships are indeed mediated by Facebook-related conflict.” Sounds a lot like the Twitter situation on our hands, right? However, there is a difference between Facebook and Twitter when it comes to dating and marriage: time.

According to Clayton’s 2013 study, Facebook is more likely to damage newer relationships. Twitter, on the other hand, can effect any relationship. Now we’re getting somewhere.

Though you might now have the urge to deactivate one or five of your social media accounts, hold off. According to The Daily Beast, Brenda Widerhold, the journal’s editor in chief, said in a statement that, “Since much of the social-networking research is in its infancy, we do not know if other media, such as Instagram, will also impact relationships in a negative way.” We have to remember that social media is just now going through its awkward teen phase — who knows what the future of Facebook or Twitter holds.

Sure, the idea of our Twitter handles and Facebook accounts damaging our relationships are neither surprising nor reassuring, but it is a pretty good wake up call. Though a mass exodus from social networking site might not be the answer, moderation sounds a little better.