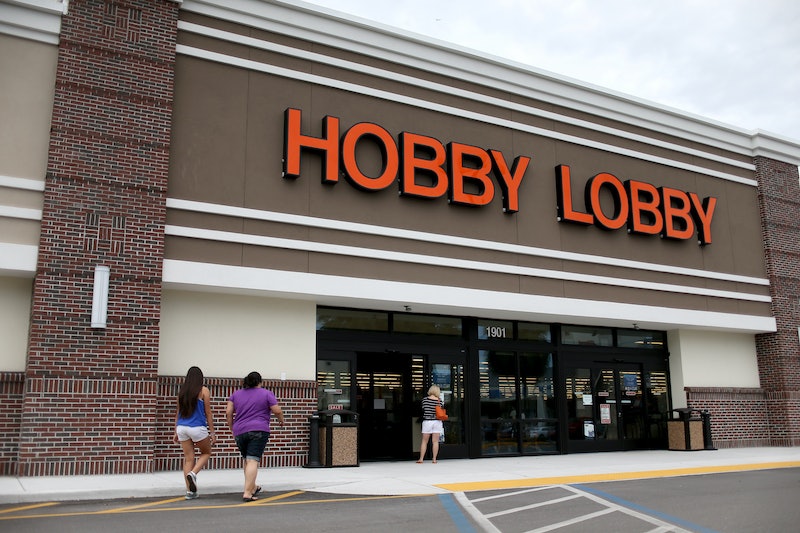 Since the Supreme Court handed down its disappointing Hobby Lobby ruling a week ago, reproductive rights groups have launched campaigns urging people to "join the dissent." Now, a federal judge has added his voice to the mix: Judge Richard George Kopf told the Supreme Court to "STFU. " Really.

Writing on his personal blog, Kopf — who was appointed to the bench by former President George H.W. Bush — criticized the Supreme Court not for making the wrong decision per se, but for taking up the Hobby Lobby case at all. The case, Kopf believes, has lowered the opinion of the court in (most) Americans' eyes.

Kopf starts out by highlighting the absurdities of the Hobby Lobby decision — namely, that a case on contraception for women was decided by five men who all identify as Roman Catholic. Not only that, but each of these justices were appointed to the Supreme Court by a Republican president. With that in mind, it's hard not to see how, well, "stupid" and "misogynist" the ruling looks, according to Kopf:

To most people, the decision looks stupid ’cause corporations are not persons, all the legal mumbo jumbo notwithstanding. The decision looks misogynist because the majority were all men. It looks partisan because all were appointed by a Republican. The decision looks religiously motivated because each member of the majority belongs to the Catholic church, and that religious organization is opposed to contraception. While “looks” don’t matter to the logic of the law ... all of us know from experience that appearances matter to the public’s acceptance of the law.*

So, what should the Supreme Court do to fix it's new image problem? "As the kids say, it is time for the Court to stfu," Kopf writes. And in case you don't know Internet lingo, the judge linked to the Urban Dictionary definition of the popular phrase.

If the high court would have just "STFU," Kopf writes, we wouldn't be having these heated arguments now over religious freedom and the purported evils of contraception. Essentially, no one really would've cared about Hobby Lobby, and America would be better off for it:

Instead, we now have a nation that's even more polarized. "This term and several past terms has proven that the Court is now causing more harm (division) to our democracy than good by deciding hot button cases," Kopf writes.

But it's not just divisiveness that the high court causes. According to a recent Rasmussen Reports survey, just 26 percent of likely American voters believe the Supreme Court is doing a "good" or "excellent" job. The report concluded that this is because most Americans think the justices are ruling based on their political affiliations and opinions, not the law. When you have five men ruling to deny insurance coverage of several types of birth control for women, Kopf is right — it sure doesn't look good.

It doesn't sound like Kopf is entirely opposed the Hobby Lobby decision. He has yet to explicitly write about whether the ruling is, legally speaking, right or wrong. On June 30, the judge uploaded just a short post asking if the "closely held" definition of corporations is "intellectually incoherent":

What is the meaning of “closely held” and where in RFRA is such a distinction found? Why should it matter whether a corporation is “closely held,” whatever those words might otherwise mean, if the board of directors or CEO sincerely express a religious objection on behalf of the corporation to the contraception mandate found in the regulations of the Patient Protection and Affordable Care Act of 2010 (ACA)?

But his post about "looks" and the Supreme Court's integrity does give us a lot to think about: Where would we be without Hobby Lobby?