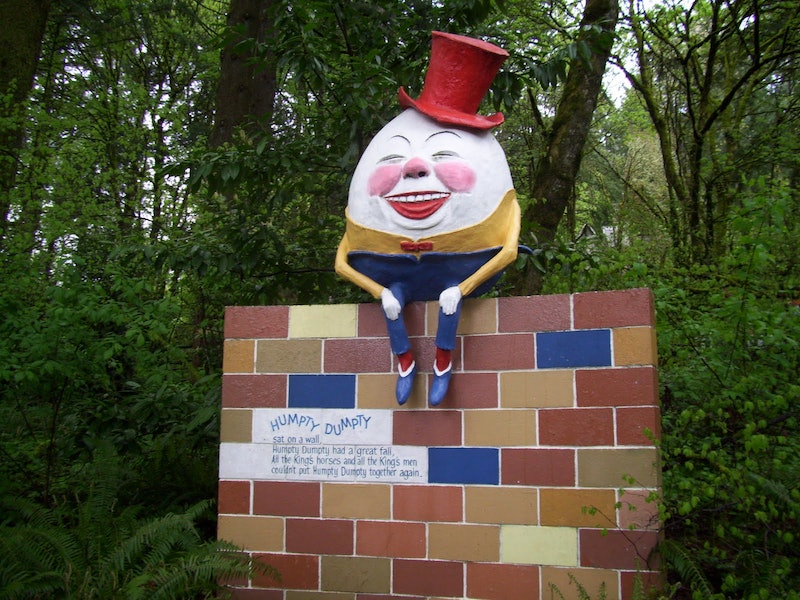 It may be based on a made-up story, but you can't make this stuff up. Over the weekend, the Humpty Dumpty statue at Oregon's Enchanted Forest fell off the wall he had been sitting on for 46 years. Yup, just as the nursery rhyme goes. The tragic incident occurred when two park visitors tried to climb on top of the wall and accidentally pulled Humpty down with them. Pictures documenting the accident show a sad heap of rubble that used to be a smiling, jolly Humpty. It's unclear whether park officials have called all the king's men, but there might be hope for Humpty yet.

According to the amusement park's Facebook page, "Humpty is like a part of our family, and original art by Roger." Local artist Roger Tofte is the artist behind the Enchanted Forest theme park who created Humpty in 1968. Now at 84, Tofte is going to take on the challenge of building Humpty again from scratch.

"[It's going to] take quite a few hours just to start from scratch again and try and duplicate what I had," Tofte told KOIN6. "I hope I still have some creative juices left."

Here is a picture of Tofte's original creation — along with some polite visitors who did not attempt to climb the wall — before the great fall.

In the interim, the park has put up a new sign in place of the statue and accompanying nursery thyme:

The Humpty Dumpty incident may be the first real-life interpretation of a nursery rhyme, but almost all of our favorite nursery rhymes are actually based on real life. And some of them are just as sinister as the now infamous Humpty case.

"London Bridge Is Falling Down"

This catchy nursery rhyme — that Fergie even sampled for a hit single — is allegedly based on the several iterations of the real-life London Bridge, which has seen everything from Viking attacks to child sacrifices. Also, general wear and tear.

"Ring Around the Rosie"

This one is especially dark, as it's a reference to the 1665 Great Plague of London. The "rosie" refers to the rash that covered the victims, the "pocket full of posies" refers to covering up the smell of the rash, and "ashes, ashes, we all fall down" refers to, well, everyone dying.

This nursery rhyme goes "Mary Mary quite contrary, how does your garden grow? With silver bells and cockleshells, and pretty maids all in a row." Sounds lovely, right? Not so much. It's actually about Queen Mary I of England, aka Bloody Mary, who is known for executing hundreds of Protestants. The silver bells and cockleshells in the rhyme? Yeah, those would be torture devices right there.

More like this
The 'Hocus Pocus' Sequel Finally Has A Release Date & It Makes Total Sense
By Shannon Barbour and Radhika Menon
I Tried Marilyn Monroe's Makeup Tricks, & They're Pretty Genius
By Olivia Rose Ferreiro
Penn Badgley & Leighton Meester Met On A Horror Movie Set Before 'Gossip Girl'
By Jake Viswanath
10 Nail Trends That Perfectly Capture The Early 2000s
By Paris Giles
Get Even More From Bustle — Sign Up For The Newsletter