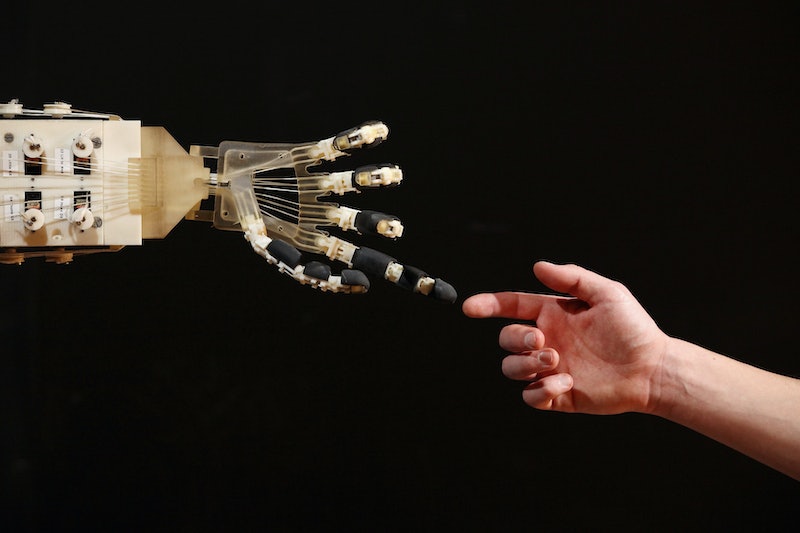 So... according to Louis Del Monte — physicist, entrepreneur, and author of The Artificial Intelligence Revolution — humans will no longer be the dominating lifeform on the planet by 2045. That honor will be bestowed upon artificial intelligence, or A.I.: essentially computers and robots. And that might just spell trouble for humanity. If all of this news smacks of science fiction storytelling of the televised and cinematic order, you're not alone, as Del Monte's theories are rife with points we've already seen play out in those two mediums.

Essentially, Del Monte is pitching to us a worldview that's already been seen in films like Transcendence, A.I., and I, Robot, and television programs like Almost Human and Doctor Who — just to name a few. In Del Monte's view, it's not so much a possibility as it is an inevitability that at some point in the future, machine intelligence will outmatch all human intelligence in the world, combined. (Go ahead, cue the full-body chills and creepy musical accompaniment.)

"In the early part of the post-singularity world, one scenario is that the machines will seek to turn humans into cyborgs," explained Del Monte. Which — if you're even a passing fan of BBC's Doctor Who, one thing crosses your mind: the Cybermen.

A race of humanoids that were "cyber-converted" or, in later episodes, "upgraded" to become cyborgs, the Cybermen lack individuality, names, and emotions as they were viewed as a weakness of humanity that needed to be fixed. It was all done for a perceived good — so that human information and history would never be lost — but the removal of humans' physical and emotional weaknesses proves time and time again on the show that it's not exactly the best answer, either, even if immortality's allure pulls strong.

If Del Monte's theories about a cyborg evolution become true, this new race "might view us the same way we view harmful insects." After all, us flesh-and-blood types have, as a species, proven to be wildly unstable given our history — to which all of these cyborgs would have access for their emotionless, "logical" reasoning process — and no doubt cyborgs would want to eradicate a nuisance that, according to Del Monte, "creates wars, has weapons to wipe out the world twice over, and makes computer viruses."

So what are we, as humans living now, to do in order to work out these hypothetical, no-good, very-bad scenarios and make the world aware of the potential harm and/or unintended consequences of our aggressive adoption of these technologies?

Why, make more TV and movies, of course!

Because what else is hypothetical hysteria and fear good for if not entertainment storytelling, eh? So, I've crafted a few movie and TV series loglines to help Hollywood get started.

(TV comedy) Molly is a school teacher in 2050, and the world is in a very different place. While most of her classmates have undergone the now-standard Intelligence upgrade (read: a cyber chip implanted into the brain with the whole of the world's knowledge in it), Molly has avoided such a fate thanks to a mix-up in paperwork. But in order to survive in this new world, she must fake A.I.-level intelligence. In this screwball comedy with a lot of heart, Molly attempts to navigate these waters while still keeping her humanity at the front and center of everything she does.

(Action/Drama film) We're 20 years past The Singularity — the day of artificial intelligence sentience and the crash of civilization — and cyborgs, run via hive mind by one megasupercomputer, have officially taken over the world. Only a small number of true humans are left, creating a territory in the rough, mountainous terrain of northern Canada. As they fight to stay alive while being hunted by the cyborgs, a ragtag group of refugees with nothing to lose decide to try and take back the planet for the humans and put an end to the tyranny of computers.

(TV dramedy) Meet Raffio, a robot from the future. For the past 50 years, emotionless half-human cyborgs and robots connected via a central computational source (or hive mind) have been running the planet, constantly upgrading themselves through scientific research on other robots to ensure they're operating at the highest levels at all time. One day, after completing one of his many daily experiment shifts, Raffio notices something within him has changed. He can... feel things. Emotions, free thought, and a highly, highly attuned sense of awareness. He is the only one of his kind. Will what Raffio experiences and understands about his situation change him or maybe even the world? And is his life in danger?

More like this
Meghan Markle Hints At Possible ‘Archetypes’ Return
By Bustle UK
You Definitely Know The Voice Of Shuri's AI In 'Black Panther: Wakanda Forever'
By Brad Witter
This James Bond Event At Abbey Road Studios Was A 007 Fan's Dream
By Samantha Rollins
The 'Love Actually' Reunion Is Missing A Major Player
By Bustle UK
Get Even More From Bustle — Sign Up For The Newsletter