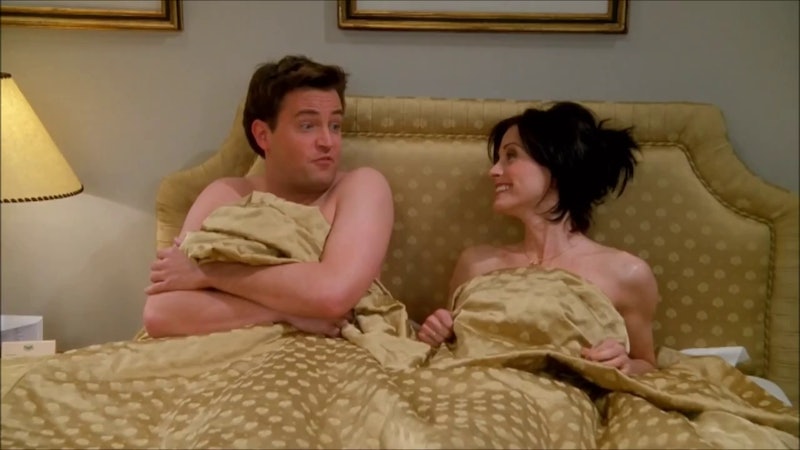 If you haven't discovered it yet already, most TV channels now play reruns of one of the best shows in TV history, Friends , all the time. Seriously, if you turn on your television at any point in the day, there's bound to be at least one channel airing an episode. And some of the (many) moments I don't mind watching over and over again include each of the friends discovering Chandler and Monica's secret relationship, especially those in the episode appropriately titled "The One Where Everybody Finds Out," because they provided some of the biggest laughs and sweetest moments of the series.

Originally the show was never going to pair Chandler and Monica together. In fact, Monica was originally written to fall for Joey. Friends later parodied this concept, but can you imagine what that would have been like if the writers actually went through with it? I know I can't, because there is no better person for Chandler than Monica and vice versa.

So for all of you who have lived in a cave for 20 years or just want to relive the joy with me, the process of the entire gang finding out about the secret Monica/Chandler romance took place over the course of a few different episodes. The attempts the couple took to keep their relationship a secret were hilarious on their own, from Monica going underwater in the tub to hide from Joey to Chandler kissing everyone anytime he leaves a room.

But seeing each of the friends' reactions to finding out about Monica and Chandler was priceless. Surprisingly enough, Joey was the first to realize the two were together, but in true Joey fashion it had nothing to do with the the two lovebirds sneaking around together in Chandler and Joey's apartment, literally right under Joey's nose.

Finally after a romantic weekend away goes awry for Mondler (Monica and Chandler's celeb name obviously), Joey discovers that Chandler and Monica were telling the same story of seeing Donald Trump getting on an elevator and that Monica is missing her eyelash curlers. He is able to put two and two together and can barely contain his shock.

After Mondler has Joey promise to keep their relationship a secret for now, Rachel is the next in line to find out. She accidentally overhears the lovebirds on the phone together and right before the two engage in a little dirty talk, Rachel screams and hangs up. She tries to tell someone about what she's just overheard but she's not allowed to because her resolution is to gossip less.

Rachel and Joey are tasked with keeping the secret, though Mondler have no idea that Rachel knows. Next up is Phoebe, who may win for best reaction to the news. Seriously, just watch and enjoy.

Now rather than take Joey's advice and tell Mondler they all know their secret, Phoebe and Rachel decide to mess with the couple and try to get them to admit to the secret relationship. And how do they do this? By having Phoebe pretend to seduce Chandler.

The three conspirators get caught however, and Mondler decides to go along with their game by having Chandler flirt back. Then Phoebe utters another one of the best lines in the whole series. And Joey returns with another gem.

When Chandler and Phoebe go in for the kiss, Mr. Bing can no longer take it and he admits the truth, he's in love with Monica. And Monica is in love with him. The rest of the gang come out of their hiding place and are pleasantly surprised that Mondler aren't having casual sex, they're in a serious relationship.

All that's left is Ross, who Monica and Chandler were particularly worried about finding out, since he's both Monica's older brother and Chandler's best friend (awkward). When he does find out, it's when he's in his new apartment across the street and sees Monica and Chandler doing it in Monica's apartment, through the window that never seems to have blinds. Dumb move guys, dumb move.

After Ross understands the couple is in love, he immediately gets on board and the couple starts a beautiful journey that includes an unforgettable proposal, great marriage, moving to the suburbs, and adopting twins. Still, I'll never forget the perfection of how Monica and Chandler's relationship started and was ultimately figured out by their closest friends.

To all the TV networks out there, keep going with those reruns. I'll watch Friends no matter when it's on.