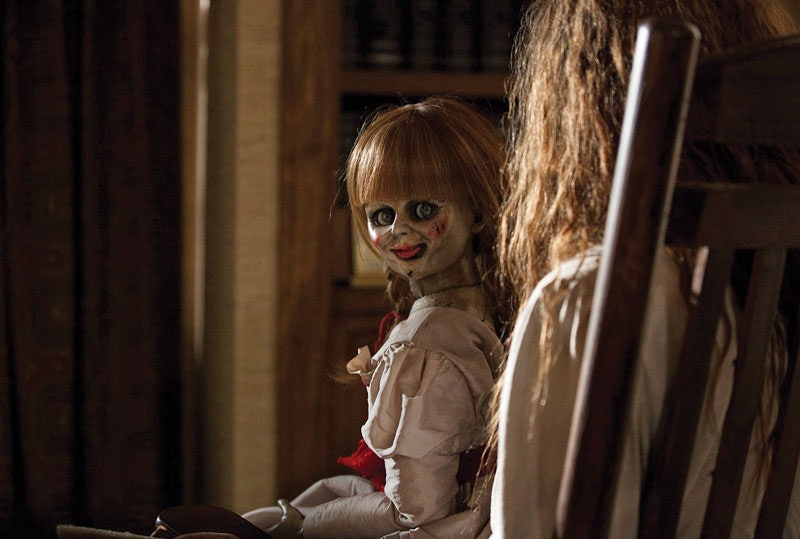 Remember that horrifying doll from the 2013 haunted house flick The Conjuring? Well, she's baaaack — this time as the starring vehicle. According to Deadline, The Conjuring is getting a spin-off film titled Annabelle , which will be released in theaters on October 3. The film, which is neither a sequel nor a prequel, will center on that awful doll from the original movie, and is guaranteed to make you shove all of your childhood toys in the back of your closet. No other plot details for Annabelle have been released yet, but one question that comes to mind is whether Annabelle will also claim to be based on a true story, just as the original film does.

The Conjuring is allegedly based on a true story, but how true that true story is depends on whether or not you believe in ghosts. The film follows the Perron family as they move into a home on Rhode Island, which, within about two hours, is revealed to be super haunted. The Perron family calls upon Ed and Lorraine Warren, two paranormal investigators who make it their mission to rid the house of the demonic spirits. (Personally, I'd have called the U-Haul back on day one, but to each their own.)

During the film, we see the Warren's collection of paranormal "trophies," which includes the terrifying doll, Annabelle. Though Annabelle was redesigned for the film, the doll is a real item that was collected from one of the Warrens' cases. According to History Vs. Hollywood, a nursing student named Donna came into possession of the doll after it was given to her by her mother. Soon Donna and her roommate, Angie, began noticing that the doll had moved positions around the room on its own. A friend, Lou, who was staying with the women claimed that the doll had tried to strangle him in the middle of the night and gave him visible scratch marks. Soon, the girls started finding notes around the house that said "Help me." Naturally, this was terrifying, so Donna and Angie decided to take the doll to a medium to fix the problem. (Again, I would have just ran the hell away.)

The medium told the girls that the doll was possessed with the spirit of a little girl named Annabelle, who died on the field where their apartment complex was built. She also told Donna and Angie that the girl just wanted to be safe with them and that she wouldn't mean any harm. They agreed to let ghost doll Annabelle chill with them.

Lou kept having terrible nightmares about Annabelle attacking him and choking him in his sleep — obviously, he was concerned. When he started seeing random claw marks appearing on his chest, he was downright terrified. Donna and Angie called the Warrens, who realized that it wasn't the ghost of the little girl in their apartment — it was a demon posing as the ghost girl, so that it could eventually capture Donna's soul.

The allegedly true story of Annabelle is perfect for a horror movie, and most likely will be the story that the new film uses. It's certainly horrifying enough — I'm currently in a very brightly lit room, typing this article, and I'm still freaked out. I'll certainly buy a ticket to see Annabelle when it hits theaters this October — though don't blame me if I'm watching it through my hands.

Oh, and if you're curious about where the real Annabelle is today, you can make a trip to visit the doll... if you dare. She resides at the Warrens' Occult Museum and is credited with the death of one of the museum's visitors, who, according to the museum's website, allegedly got into a motorcycle accident on the way home after taunting the doll. I'm thinking about skipping that field trip.