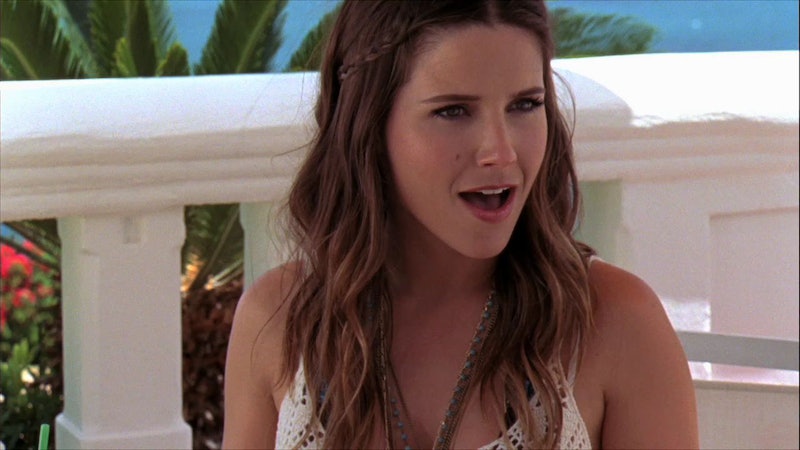 There are two kinds of people in this world: those who are Team Brooke and those who are Team Peyton. Actually, that's a lie — everyone is Team Brooke because no self-respecting One Tree Hill fan or human being would EVER be Team Peyton. So on Sophia Bush's 32nd birthday, it only seems right to celebrate by remembering all of the great lessons (which are far from all of these eff-ed up OTH lessons) that the one and only Brooke Penelope Davis taught us during the series' nine-season run.

Even though Bush has since moved on to playing a badass cop and Law & Order: SVU’s Olivia Benson’s new BFF on Chicago P.D., she can never stop being the Girl Behind the Red Door. Because, well, Brooke Davis — even at her lowest points — was the best female character on OTH. And Lucas said it best (even though he’s a cheating jerk) when he wrote in An Unkindness of Ravens:

She was fiercely independent, Brooke Davis. Brilliant, and beautiful, and brave. In two years she had grown more than anyone I had ever known. Brooke Davis is going to change the world someday. I'm not sure she even knows it.

I mean, B. Davis absolutely changed my world. Who doesn't want to be called "independent," "brilliant," "beautiful," and "brave"? So in honor of Sophia Bush's birthday and the fact that Brooke Davis would be nothing without her — here are 16 important lessons we learned from Ms. Clothes Over Bros herself:

Season 1 Brooke was the ultimate party girl/worst person of all time, and she ended up being the best, most-admirable character on One Tree Hill. #TeamBrooke

2. But Being a Bitch Is Okay if Your Heart's in the Right Place

And it'll help you find your soul mate.

4. Never Get Back Together with Your Cheating Ex

5. Drinking Wine Out of the Bottle Is Fine Sometimes

6. It's Okay to Love Yourself More Than Anyone Else

Until the right person comes along, of course.

8. But It's Totally Okay to Flash Random Guys on a Speedboat

When you're with your BFF, of course.

The most important life lesson you'll ever need to know.

11. Cheer Camp Can Save Your Life

Remember when Brooke and Peyton saved themselves from Peyton's stalker Ian by employing a move they learned at cheer camp?

12. Everyone Feels Insecure... Even Brooke Davis

It just means you're going to become a wildly successful businesswoman later.

13. "Anorexia is a disease, not a fashion statement."

Show your body some love.

14. #TeamBrooke Is the Only Team

16. And If Words Aren't Enough, This Face Will Do

More like this
Ciarán Griffiths Is Making His 'Corrie' Comeback
By Catharina Cheung
The 'Kenan & Kel' Reunion On 'SNL' Took A Dramatic Turn, Thanks To Keke Palmer
By Brad Witter
These 'Criminal Minds' Throwback Photos Show The Cast’s 17-Year Evolution
By Grace Wehniainen
The First Trailer For 'That '90s Show' Includes So Many Nods To The Original Series
By Jack Irvin, Alyssa Lapid and Grace Wehniainen
Get Even More From Bustle — Sign Up For The Newsletter