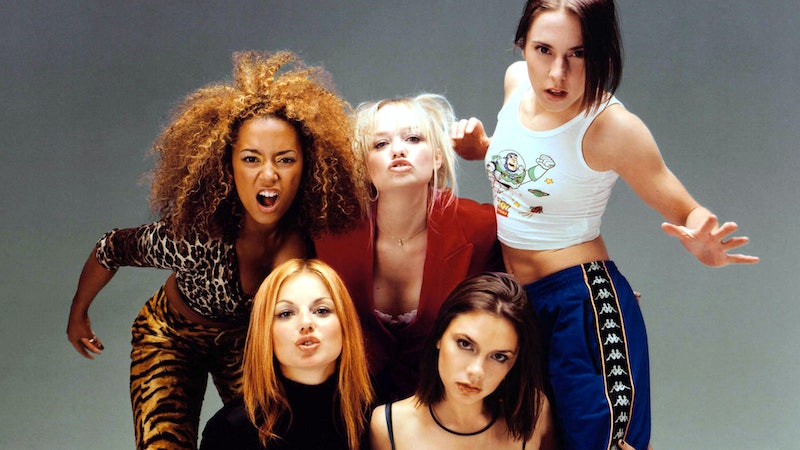 I didn't know it when I woke up this morning, but Tuesday July 8 marks the 18th anniversary of the Spice Girls' debut single, "Wannabe." This is cause for celebration! To say that I was obsessed with "Wannabe" when it came out would be an understatement: the song was my life. Like everybody else, I had absolutely no idea what the hell "zigazig-ah" meant, but I knew that it was brilliant (and I was also pretty sure that it had something to do with S-E-X, which made it even more amazing).

Though "Wannabe" was initially released on July 8, 1996 in the United Kingdom, it didn't come out in the United States until January 25, 1997. Upon its U.S. release, the song debuted at number 11 on the Billboard Hot 100 chart, giving the Spice Girls the highest debut by a British act in the chart's history (a record that has since been broken by One Direction). Eventually, "Wannabe" reached the number-one spot, where it remained for four consecutive weeks. In fact, it's still a pretty serious party anthem to this day...according to me. We all loved the Spice Girls. I loved the Spice Girls. I even followed Sporty Spice's solo career after the group disbanded in 2000! But I digress.

"Wannabe" actually makes fairly frequent appearances on my workout playlists (hey, I gotta do me), but I hadn't seen the music video in a number of years — this was the perfect opportunity to revisit it! (Unfortunately, it's only available in extreme underwater, super potato quality on YouTube. My apologies.) So, to commemorate "Wannabe's" historic 18th anniversary, let's take a look back at the music video's most memorable moments!

What were these people doing to deserve such harassment?

When This Terrifying Candelabra Casts a Spell On You

I know that the video's supposed to take place at the St. Pancras Grand Hotel, but let's be real, this is a haunted house.

When They Attempt to "Break It Down"

I guess I thought that the Spice Girls were good dancers — they are not. Everybody's just kinda doing their own thing here.

...And Then Does a Bunch of Backflips

When Posh Spice Seduces a Priest By Sitting On His Lap

The dude across the table is all, "HEY. Stop it."

When Edward Scissorhands Is In the Hizzy

When This Random Woman Gets a Ton of Unecessary Screen Time

She's ready for her close-up.

When Baby Spice Doesn't Know How To Shimmy

Posh is like, "C'mon, shimmy!" And Baby is like, "I only know how to make it look like I'm having a very small seizure. I can do jazz hands, though. Is that OK?" It's not, but what're ya gonna do? Meanwhile, close-up lady is trying to steal the spotlight again. The nerve!

Go ahead and give your afternoon a little pick-me-up by watching the "Wannabe" music video right meow. I promise, you won't regret it.