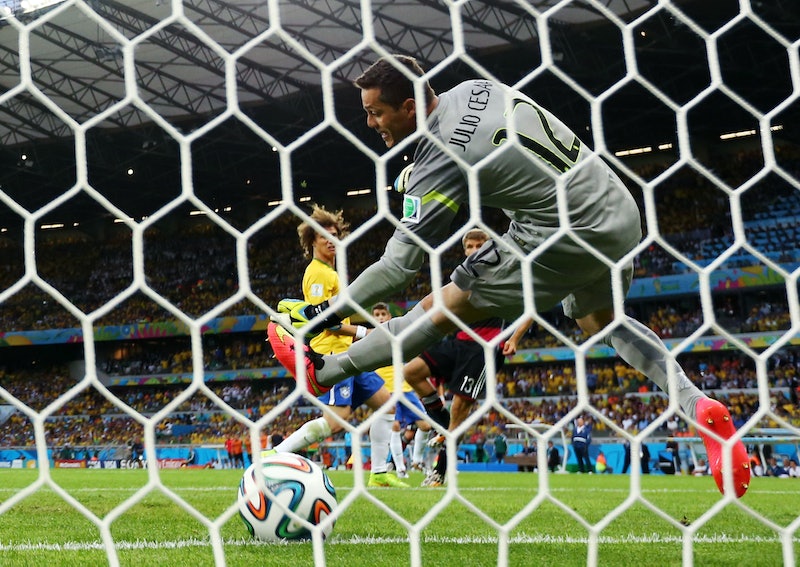 After its quarterfinal game against Colombia on July 4, which Brazil narrowly won, Brazil's goalie Julio Cesar was flying high after a tense match. But by Tuesday Julio Cesar became public enemy no. 1 after letting in five goals in the span of 18 minutes in the game's first half alone. He let in two more in the second half, bringing the final score to 7-1. Now that's a bad day on the field for Cesar.

But he's not alone in completely whiffing in the game on Tuesday — how could he be? The entire Brazilian team will be blamed for this catastrophic loss, especially its defenders. Everybody, that is, except Neymar, who is out with a fractured vertebra after being kneed in the back in the Brazil-Colombia quarterfinal.

After Brazil's shootout win over Chile on June 28, the home country's O Globo said Cesar "saves Brazil" in a headline and commentator Pedro Motto Gueiros called him "a saint," according to London's Mirror.

He performed miracles in the shoutout, showing what good form he's in.

It's a good thing Cesar had those warm and fuzzy headlines. He'll need them after Tuesday's performance, poor guy. In fact, by the end of half time, he'd already become the subject of hundreds of mocking social media posts. We've summed up a few of them for you here:

How many fingers am I holding up?

This one's a play on the movie Weekend at Bernie's, about a couple of employees who try to convince people their dead boss Bernie is, in fact, alive.

Cesar really did try to stop those goals.

4. Everybody Gets a Goal

Goals for free! Goals for days!

By the end of it, Cesar was just falling to the turf in absolute frustration — most of it with his defense, who seemed entirely unable to put up a fight and stop Germany's onslaught.