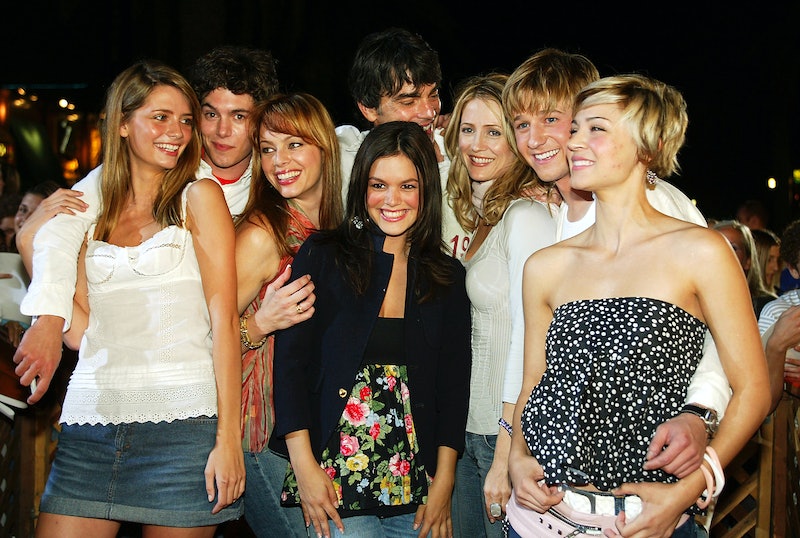 Okay, take a moment to freak out: it's been 10 years since The O.C. premiered on Fox.

Now that you've reconciled the slow march of time and the inevitability of death, you can celebrate, because we get to talk about The O.C. again. Woefully under-appreciated, the original (okay, other than Beverly Hills, 90210) teen soap opera starring Benjamin McKenzie, Mischa Barton, Adam Brody, and Rachel Bilson started so many things: high school obsessions with wearing Hollister, indie music becoming mainstream, and the dead-eyed reality show known as Laguna Beach. And of course, now that show creator Josh Schwartz (and coincidentally, Peter Gallagher and Brody) is making the press rounds for the show's 10th anniversary of the dearly departed series, we get some juicy tidbits about the show that we never knew.

So just what did we learn about The O.C. after all this time? Read below to find out!

There could've been a reunion:

Schwartz to TV Guide: "You know we wanted to do a reunion for the 10-year [anniversary], but in order to do that we wanted everybody to participate and to want to participate."

There also could've been some weird relationships:

"There were a lot of different character permutations and connections that we didn't do. We always talked about, oh, there's a Summer-Luke shape that could be interesting, or Luke-Anna originally, that we talked about at one point. Or Seth-Marissa, what would that look like?"

"That was a challenging character to get everybody to sign up on. Because in the beginning Fox was saying, 'Well if Ryan (Ben McKenzie) is our Luke Perry who is our Jason Priestly? That was the question that kept getting asked. And I was like, 'We're not doing that show.' So the idea that our second male lead was going to be a nerdy, comic book-loving Jewish kid was a bit scary."

"I was told at one point they really did not like the Seth character early on in the pilot process and the way the note was relayed to me was, 'Could the Cohens have had an abortion?' In the network's defense, the character of Seth may have been a little bit more annoying than he ended up being ultimately, but it was a bit harsh."

Schwartz, to Vulture: "A lot of broadcast-standard battles raged after that. And it was while we were doing the Marissa-Alex lesbian story line. A lot of that extra scrutiny was being aimed at our show."

That's why Olivia Wilde (Alex) had to leave the show:

"It was a larger set of nervousness about that story line from the network brass. I loved Olivia Wilde [who played Alex, Marissa’s brief girlfriend] — she read for Marissa, initially. We created [this] character for her in season two and would love to have kept her on the show."

On being "emo" and mainstreaming indie rock:

"For me, it was always about using the music to highlight the emotional state of the characters, and finding that perfect song before writing the script. It feels like we’re talking about prehistoric times now, but when the show was on, it was pre–satellite radio, I believe, pre–Internet radio — certainly, pre-iTunes. Terrestrial radio had become incredibly consolidated. MTV wasn’t playing music videos anymore. Really, the only opportunity to get this music out there was through the show. So we were functioning as a form of radio for those years. I take a lot of pride in helping make listeners aware of that music and, hopefully, helping those bands earn a nice living."

On killing off Marissa:

From TV Guide: "You know, that was a really challenging decision and moment for the show. There were a lot of factors at play. I mean creatively, we felt like we had told those stories and that this was always kind of in Marissa's DNA. That she was a tragic character and that try as he might, Ryan ultimately wasn't going to be able to save her ... I will say that after we did it that night, because Marissa was a real punching bag of a character for television critics, and what I learned after that night was those critics were in much smaller number than the millions of people who watched the show and loved that character. And there was a real sense the morning after of 'OMG. What have we done?'"

Peter Gallagher might be Sandy Cohen, Best TV Dad Ever:

Peter Gallagher to The A.V. Club: "What was really nice about that was that Josh [Schwartz] was really open-minded about my perspective as a father, ’cause none of them were fathers. And of course, I was open-minded about my wife’s perspective. So when there were things that didn’t ring very true about what a father would do, Josh had his ear open to that. So I could behave more as a father might in those circumstances, rather than seeing Mischa [Barton] at some older guy’s house and saying, [Nonchalant tone.] 'Oh, hey, what’s going on?' instead of, 'What the hell is wrong with you?! Get outta here!' [Laughs.] No, if I said that, I should be arrested for the rest of my life, locked up for being such a bad father."

Where the gang would be now:

From TV Guide: "I had actually pitched the idea that Ryan and Taylor were not together and that he had recently run into Alex Kelly and that they were actually starting to date. And Seth and Summer did not have babies yet because Summer was not going to have children until the world was a safer place and had reduced its carbon footprint."

BONUS: Watch Tate Donovan (Jimmy Cooper) throw shade on The O.C.'s teen actors and Adam Brody exist and give boring answers to questions about The O.C.