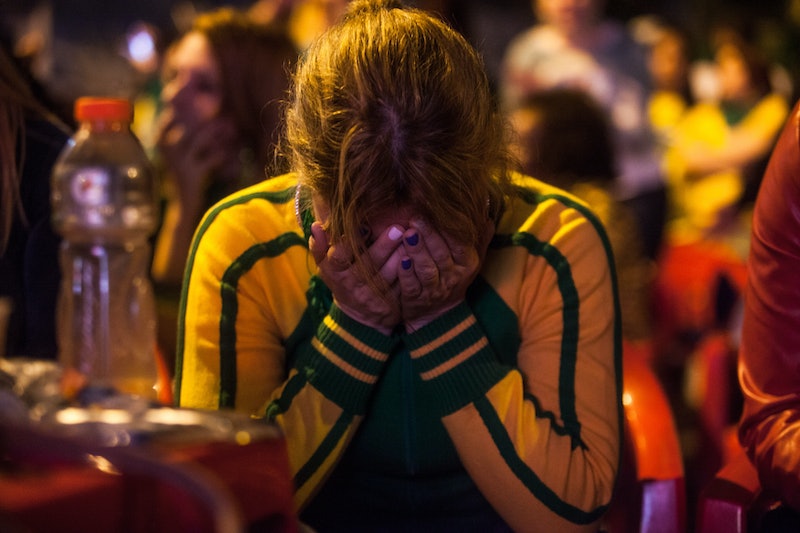 In a match commentators are calling “embarrassing,” “appalling” and “an utter humiliation,” Germany obliterated Brazil in a 7-1 blowout during the World Cup semifinals Tuesday. It’s the worst defeat for Brazil since its 6-0 loss to Uruguay in 1920, and the first time Brazil has lost in a competitive game on its home turf since 1975. Fans reacted to the loss by crying, chanting obscene things about the country’s president, and even burning flags in the streets.

Tragic for Brazilians? No doubt. But contrary to what you might assume, it’s not the worst blowout in World Cup history — far from it, in fact. Here are four World Cup matches that make Brazil’s stunning defeat seem quaint by comparison.

The 1954 game between Hungary and South Korea was fraught with geopolitical tension. The Korean War, which pitted U.S.-backed South Korea against Soviet-backed North Korea, had ended a year earlier; Hungary, meanwhile, was still under Soviet control. As such, the match was seen, much like the Korean War itself, as a proxy battle between the the U.S.S.R. and the U.S..

The results were decisive: Hungary demolished South Korea, 9-0, and went on to the championship — a symbolic victory for the Soviets. But that victory was undone during the final game, when Hungary was defeated by West Germany — a U.S.-supported democracy.

The 1950 World Cup was the first one in 12 years, as the last two matches had been cancelled due to World War II. Due largely to fallout from the war and the subsequent division of Europe, a lot of countries either couldn’t or didn’t compete in the contest, and a couple of unrelated disputes further diminished the number of participants. As a result, only 14 teams played in the tournament, which was held in Brazil. This, in turn, required organizers to choose a different format for grouping.

As a consequence of all of this, Uruguay didn’t have to play a qualifying match, and then only had to play one game — against Bolivia — before advancing beyond group play. It ended up winning that game 8-0, one of the most lopsided victories in World Cup history, and then — in a bigger shock — defeated Brazil 2-1 in the final game. Uruguay’s victory over Brazil was the only time a team has lost the championship on its own soil. It was so unforeseen — one Brazilian paper sported the headline “Tomorrow We Will Beat Uruguay!” the day before the match — and so traumatizing to the country as a whole that Brazilians coined a term (Maracanazo) to commemorate it.

The odds were against El Salvador from the start. The country was engulfed in a violent civil war at the time — which tends to, you know, make things like sports less of a priority — while Hungary was one of the best teams in Europe. All but one of El Salvador’s players were managers, and due to various unrelated circumstances, they were short on players, tracksuits, and even official FIFA balls.

Unsurprisingly, El Salvador was demolished by Hungary, 10-1. However, given the incredibly trying circumstances the El Salvador team faced — in addition to the lack of resources, they were one of the few sources of symbolic national unity during the war — the fact that the team scored one goal (still its only goal in World Cup History) gave the players one huge, if short-lasting, reason to celebrate.

This wasn’t technically a World Cup game, but rather a qualifying match for the World Cup. Nevertheless, it bears a mention due to the astonishing margin of victory: 31-0, the largest ever in an international soccer/football competition (and a ridiculously high-scoring match in general). Australia’s Archie Thompson alone scored 13 goals, which is more than any other player in an international match.

Despite having suffered a crushing defeat, the Samoan team’s manager struck an optimistic tone after the loss (“we will get better by the match”), and credited the game with “spark[ing] an interest in football on the islands.” In addition, the fact that the teams were so mismatched — according to the manager, some Samoan players had literally never played 90 minutes straight of soccer before — led organizers to restructure the format of qualifying rounds for future tournaments.