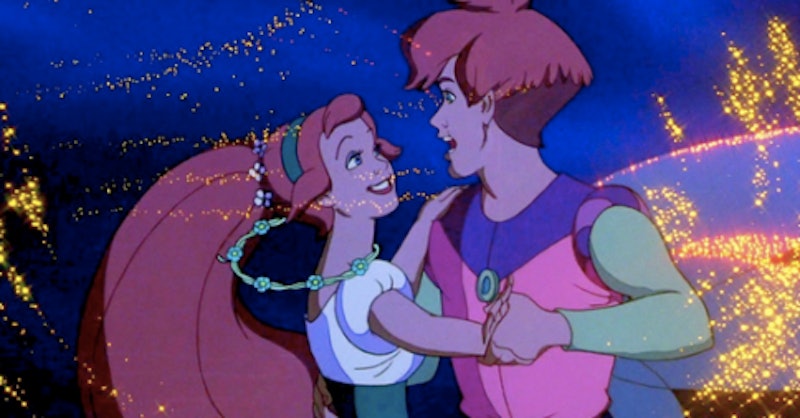 In the same way that "Kleenex" has become synonymous with "facial tissue" and "Coke" often acts a stand-in word for any brand of brown soda, the phrase "Disney movie" is often used interchangeably with "animated film" — to the point where it almost seems like Walt & Co. were the only game in town. However, as we of the Laser Disc players (slash, obsessive IMDb routine) know well, this couldn't be further from the truth. In fact, a number of the most undeniably excellent late-20th-century animations were not Disney fare.

Indeed, in revisiting these films, you start to notice a distinct and pervasive undercurrent of non-Disney-ness, a number of them creepier, zanier, even more visually complex than their song-studded House of Mouse contemporaries. Of course, there are also plenty of princesses to be had herein (hi, Anastasia!), and Disney certainly had its darker moments (the toy factory from The Great Mouse Detective will never not haunt my dreams). Still, it's perhaps telling that Anastasia's nemesis is a consistently rotting corpse, and The Great Mouse Detective achieved considerably less press than others surrounding it (see: The Little Mermaid ). Apparently, some stories just weren't quite meant for the Magic Kingdom.

Meanwhile, some names besides "Walt" start to enter the mix — from the prolific Don Bluth, who was personally responsible for a sizable chunk of this list, to Richard Williams, the obsessive genius behind one of moviemaking's greatest Sisyphean feats. So, cast aside your mouse ears, at least momentarily, and check 'em out:

It's a classic tale: Children neglected by their too-busy parents run away from home and meet a strange man under a bridge in Central Park — only this time, that man happens to be Stanley, the good troll in a world of bad, who has been banished from his kingdom by Gnorga, the evil troll queen (voiced, fabulously, by Cloris Leachman). Though the film rests at a mere 17 percent on Rotten Tomatoes, it's at least potentially useful as a not-so-subtle environmentalist indoctrination tool: As Stanley sings in his initial ballad, "We could fill everywhere with flowers / If each of us used all our powers / If we all cared is what I really mean." (I am in no way kidding — see the clip above.) Plus, it features the ultimate thumb war — a wizard-battle-style face-off between Stanley's very literal green thumb and Gnorga's Medusa-meets-Midas stone-turning one.

Thumbelina may never have officially entered the Disney princess canon, but she did have one thing the others didn't: Charo, as the pink-bouffanted "Mama Toad," trying to spirit her away into showbiz. Also, if nothing else, queen's got some sincerely fabulous beetle drag:

Yes, the proto computer animation is hyper-clunky, the spaceships on par with those flying toasters of screensavers past — but with a star-studded voice cast (Matt Damon, Drew Barrymore, Nathan Lane, Janeane Garofolo) and a Firefly-reminiscent post-apocalyptic plot line, Titan A.E. is certainly worth revisiting. Also, admit it, those robots that could be straight out of The Sims are super fun to watch, if only in goofiness.

In addition to its status as the first traditionally animated film produced by DreamWorks, The Prince of Egypt deserves recognition for exactly two reasons (assuming, y'know, you can get past the whole "Old Testament" vibe and appreciate it purely for entertainment purposes): Ralph Fiennes as the voice of Rameses — because, yes — and the songs, which are of extra high quality across the board. Personal favorite: "Playing With the Big Boys Now," above, performed by Steve Martin and Martin Short.

8. The Princess and the Goblin (1994, Helmdale Film Corporation)

A princess? Check. Goblins? Also, check. Genuine jump-scares, triumphant sing-alongs, and the most magnificent royal beard since King Triton? All part and parcel of this eerie Hungarian fairytale.

One of those films that everyone just assumes is Disney, Anastasia certainly serves up some quality rags-to-riches fare, with Meg Ryan bringing her rom-com-y best and John Cusack finally getting his chance to be a prince — though, fittingly for him, not with the mainstream prince(ss) manufacturer. Still, for me, it's all about Hank Azaria's Bartok, the adorably sinister henchman — and, most of all, the bombastic power ballad that is Rasputin's villain anthem, "In the Dark of the Night."

Though most would associate Macaulay Culkin's childhood career with the Home Alone series, it's vital to remember that we were also graced with his presence as the nerdy Richard Tyler in The Pagemaster, the part-live, mostly-animated adventures of a boy trapped in a world of books. And why does it rule, you ask? Well, the library melting into paint is genuinely awesome, and the idea of being coached through life by anthropomorphized books certainly gave some solace to kids who would rather turn to literature than face the gauntlet of social interaction. Oh, also, there is some mad bike ramp action. High five, Culkin.

Known as the story that singlehandedly made an entire generation want to enter paleontology — and/or, the film that launched 1,000 (okay, 13) sequels — The Land Before Time will also go down in history as featuring one of the most traumatizing parent deaths of all time, so achingly drawn out and rain-splattered. I'll say it: Bambi's mom doesn't even hold a candle. Take that, Disney — Bluth totally won over our tear ducts.

Imagine I'm pitching you a movie: "Okay, it's Elvis Presley, but he's a rooster whose rockabilly crooning summons the sun — so naturally, his enemy is the nocturnal Grand Duke of Owls, an organ-playing effete who controls the weather, because his breath is magic. Also present: a sexy showgirl chicken, a dog who wears sneakers, and a major plotline centered on battery life. Oh, and we should probably open on a live-action scene of a very real and very terrifying flood, right?" Now, imagine that your response to all of this was not a confused cringe but rather, "Fantastic — let's fast-track this thing!" And thus, my friends, was Rock-a-doodle born. Still, it turned out 100 percent amazing — campy and beyond bizarre at every turn, with an appropriately infectious soundtrack.

Just in case Troy and Abed's duet on Community didn't convince you — or if, God forbid, you hadn't yet seen the original — let me state definitively, now and forever, that "Somewhere Out There" is the most heartbreaking song in the history of heartbreaking songs. And I am including Fergie's "Big Girls Don't Cry" in that assessment, so you know I mean business.

In all seriousness, though, both An American Tail and its sequel, American Tail: Fievel Goes West (1991), are just as aw-shucks sweet as they are high quality — especially impressive given their comparatively early release. And in case you're now bummed out, you can always break into a rousing round of "No Cats in America" (though dare I say, lol be unto the Mousekowitz family if they had lived in the age of the Internet).

Preempting both the resurgence of '60s chic and the empathetic robots of Wall-E, The Iron Giant was perhaps so ahead of its time that we didn't quite notice it was basically an animated E.T. (which was itself just an extraterrestrial Old Yeller, and every other "young boy makes nonhuman friend, young boy loses nonhuman friend" tale). Still, I would posit that Giant is extra adorable — because, I mean, we all know robots are cuter than wrinkly alien creatures. (And dogs? Just go with me on this one.) Of course, that also makes it extra tragic come the inevitable end. Seriously — try not to cry when he says "Superman." I dare you.

From Odette's tomboy antics in the opening song, to John Cleese's turn as a drawlingly French frog (who wrongly assumes he's just a kiss from princehood), to the bonkers Drop Dead Gorgeous -style themed princess costumes during the dance number at the final ball — and even within that song, the just-goin'-for-it rhyme, "Hoi polloi and those well bred agree / Each enjoy a royal pedigree" — there is not a single thing wrong with this movie. Far longer than forever, it will be my favorite.

Bonus Points: If you remember/have appropriate reverence for the music video to "Eternity" by Dreams Come True, as included after the film on the original VHS, I will kiss you on the face.

Animation buffs — or, those hungry for a juicy moviemaking story — are likely well versed in the woe-begotten tale of The Thief and the Cobbler, the 28-year-long raison d'être of Who Framed Roger Rabbit animation director Richard Williams. As legend has it, after over two decades of spotty production and limited financing, using his Roger Rabbit success, Williams was finally able to convince Warner Bros. to produce his masterpiece in 1989. But by 1992, they had wrested the project from his grasp, giving it instead to television animator Fred Calvert, who turned what was shaping up to be a Triplets of Belleville-esque art film into a more marketable Disney-style romp, complete with songs — and, in Miramax's 1995 reissue, a voice-over by Matthew Broderick.

Unfinished, the film plays like a clunkier, less-sensical Aladdin — the "Arabia" pastiche, the "beggar entangled in royal to-do" plot line, the evil vizier bent on a coup. Though some of its visuals are honestly breathtaking, each scene an explosion of complex geometry, the slapdash editing and sound work are hard to overlook.

All is not lost, however: In 2006, Garret Gilchrist undertook "The Recobbled Cut," a fan labor of love that endeavored to restore the film as closely as possible to its former glory using all available scraps of the original animation — and, thankfully, he does a damn impressive job. So, in recognition of its resurrection (available on YouTube!) — and its impressively embattled history — The Thief and the Cobbler gets some serious honorary kudos.

More like this
'Friends' Star Maggie Wheeler Offers Support To Matthew Perry After Reading His Memoir
By Alyssa Lapid
Mel B Thinks These Celebs Should Play Them In A Spice Girls Movie
By Alyssa Lapid
The 'Scream 6' Trailer Shows Off Hayden Panettiere's Return & Ghostface In NYC
By Jack Irvin and Jake Viswanath
A New 'And Just Like That' Table Read Pic Confirms A Key Character's Return
By Jack Irvin and Grace Wehniainen
Get Even More From Bustle — Sign Up For The Newsletter
From hair trends to relationship advice, our daily newsletter has everything you need to sound like a person who’s on TikTok, even if you aren’t.