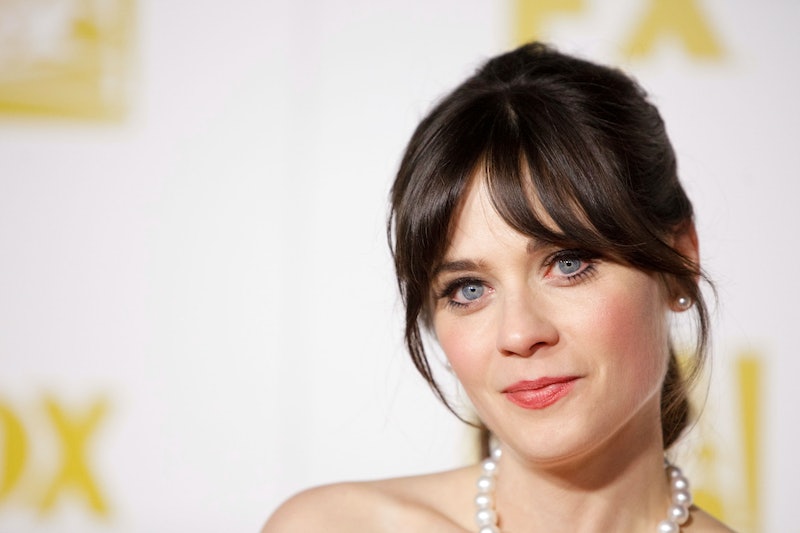 When (500) Days of Summer first came out, I was in the same bitter camp as everyone else regarding Zooey Deschanel's heartbreaking, beach cruiser-riding, eyelash batting character: what a cold bitch. How could she be so heartless to puppy-faced Joseph Gordon-Levitt? How could she dance with him at that wedding and not mention that she was engaged? It was outrageous. She was the indie ice queen that nobody wanted to be.

But then, a few months ago, New Girl came to Netflix. The Fox sitcom, which is written by Elizabeth Meriwether and produced by Deschanel, premiered in 2011. I was obviously against it vehemently. From the commercials, it seemed like New Girl was just another outlet for Deschanel's manic pixie dream girl to thrive and be the object of the affection of her three new male roommates whom she found on Craigslist. I frowned it off. "I hate her," I'm sure I said a million times.

But after watching the first two seasons, I've definitely seen the light. Not that I'm a member of the cult of Zooey, but I am a fan. Especially after this month's interview that she gave Marie Claire in which she defends her personality in the face of the online negativity:

My theory is that people in this day and age want to dismiss things. So they want to be able to dismiss you. They say, 'You don't belong, you don't deserve this because here's why, and let me find an intellectual argument for why you wearing pink or cuff sleeves or a bow makes you not worthy of your accomplishments. Everything you've done doesn't matter because you wore the wrong thing or you speak in a way that's feminine or you identify yourself as feminine.' And I just think that's bullshit.

And she's right — it's total bullshit. There's no wrong way to be a strong woman, and the fact that Deschanel is especially and traditionally "feminine" has nothing to do with her autonomy as a woman. Deschanel has been a total badass in her responses and reactions to her critics. What I used to find annoying about her — a persona which seemed irritatingly sweet and contrived from her false eyelashes to her tulle-lined dresses to her unfettered optimism all strummed along to with a ukelele — I now appreciate. (Not necessarily covet, but I can appreciate anyone who is so unapologetically themselves). In the business for over a decade, Deschanel works her sunshiney ass off. She's currently a singer in the band She & Him, her collaboration with M. Ward, and she's apparently in talks to star in a musical featuring a catalog of Loretta Lynn's music. She started the website HelloGiggles, a site for young girls that Deschanel wants to use to encourage strength: "I just felt it's important to teach young girls to be strong people, to not think, I can't do this because I'm worried about what people will say." All while producing and starring on New Girl.

Even though Deschanel's character on New Girl is almost identical to the manic pixie that I hated in (500) Days of Summer, I have started to love and admire her character Jessica Day. Because she struggles. She hardly has her life together. She's a 30-year-old teacher that had to move into a loft with three dudes she met on Craigslist because her deadbeat, ponytailed boyfriend cheated on her. And her quirks, while very prevalent (she has a hat made out of ribbons and buys her boy roommates roller skates for Christmas) aren't the apple of everyone's eye. In fact, she's teased, she's ridiculed and she's mocked a lot by Nick, Winston and Schmidt, her roommates. But they eventually grow to love her, just like I have.

I think what's so charming about Zooey Deschanel (and I can't believe I even just typed that sentence) is that she really knows who she is. As a young twenty-something girl myself who just moved cities and feels completely alone, it's comforting to see a character on TV that seems really self-assured, even in the face of adversity. And in real life, I respect Deschanel's tough as nails attitude, which isn't always apparent. She's quirky, she's kooky, and she doesn't give a damn what you think about her. I wish I could say the same about myself.