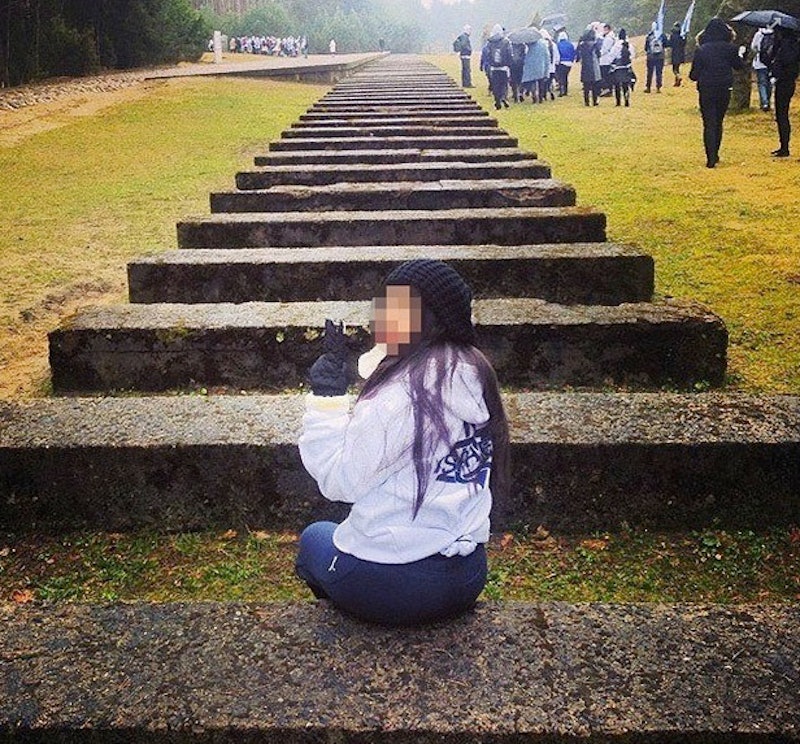 By now, you've probably already seen and were appalled by the selfies on the Facebook page "With My Besties in Auschwitz." Unfortunately, believe it or not, selfies at concentration camps were already a thing. The creator of the Facebook page has since deleted it due to angry complaints and even lawsuit threats, but it's been argued that the anger should really be directed at the selfie-takers themselves.

The majority of the selfies found on "With My Besties in Auschwitz" were of Israeli students on field trips to the notorious Nazi concentration camp in Poland. In one, a girl pretends to hitch a ride next to the train tracks, and another selfie of two girls was accompanied with the caption "Hot! Saving you a seat on the bus ride to Treblinka." Treblinka was another Nazi concentration camp in Poland.

The page's creator, whose name hasn't been released, told the New Yorker that she was able to find an "endless" variety of these types of pictures on Facebook, Instagram, and Google Images. In the same vein as the Selfies at Funerals Tumblr, she started aggregating the photos and posting them in one place — and what better place to attract attention than Facebook, the largest social network on earth?

Here's a smattering of pictures that were posted on "With My Besties in Auschwitz."

It goes without saying that these selfies are reprehensible, but the pictures also reflect a deeper problem. They depict a youth culture that is completely out of touch with history. "With My Besties in Auschwitz" may have garnered the most attention (more than 12,000 likes) out of any other report of the trend, but it only illustrates the tip of the iceberg.

Last November, Vice Germany also wrote on the disturbing phenomenon, which extends beyond Auschwitz, with a focus on the hashtags that these teens use to accompany their flippant pictures. For example, a girl jumps for joy at the Holocaust Memorial in Berlin and uses hashtags like #happy and #weeeee.

Someone else took it one step further with the hashtag #feelgood.

It's obvious that these are not hashtags one should ever use to describe a Holocaust memorial. In fact, you should probably never even say Holocaust and hashtags in the same sentence. But apparently, young people will create a hashtag for just about anything, even the hashtags #Instacaust and — wait for it — #Yolocaust.

Months before the Vice piece, the New York Post also depicted the downfall of human civilization by highlighting the Selfies at Serious Places Tumblr, which includes selfies at Auschwitz, as well as selfies at Ground Zero, Chernobyl, and Anne Frank's house.

So while people may be up in arms over the viral With My Besties in Auschwitz, the Facebook page clearly isn't the first glimpse into this asinine trend. And instead of protesting sites like it, it would be much more productive to redirect your anger at the kids taking them instead. According to the New Yorker, most of the teens featured on the Facebook page removed their selfies from their own pages out of shame and embarrassment, so at least we know they're paying attention.

Images: With My Besties in Auschwitz/Facebook (the page has since been removed)