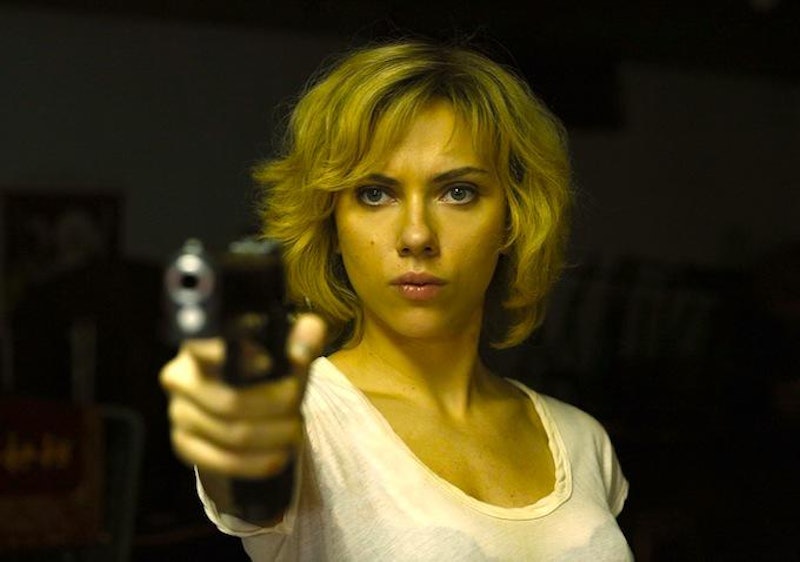 It's always great to see the actresses of today go a separate route than the guaranteed-bankable but guaranteed-snoozefest romcoms and take on a project that's really, truly different. Scarlett Johansson has already done so a few times: She plays the Black Widow in the Marvel films, and she just starred as a man-eating alien in Jonathan Glazer's supremely creepy Under the Skin. So, I'm gonna go ahead and call it now — it's safe to say that her next foray into a dark film will be great as well. And, judging by this, I'm probably going to be right? To promote the film's upcoming release, Universal has put out a new clip from Luc Besson's Lucy featuring Scarlett Johansson, and it's our first real look at just how badass her superhuman character is going to be.

If you're not familiar with the premise of Lucy, let's start there: The film is being helmed by the Taken franchise's Besson, who also is responsible for La Femme Nikita — another film about a badass lady warrior. So, the dude knows his stuff. Lucy follows the story of a woman named Lucy (Johansson) who ends up developing superhuman strengths after being forced to act as a drug mule for a criminal organization — specifically, she's altered so that she can use more than the 10% of her brain that, by (a very wrong) myth, humans can only use. She escapes her captors, and gets to do a lot of cool stuff with her new abilities.

In the first red band clip below (the trailer was released this past April), we get our first look at Lucy testing out her abilities as she escapes captivity in the most badass way, and kills the mobsters who were holding her prisoner. Lucy will hit theaters on July 25.

More like this
You’ll Be Able To Stream Bullet Train Before The Holidays
By Arya Roshanian and Radhika Menon
You Can Finally Stream 'Ticket To Paradise' At Home
By Chloe Foussianes
How To Stream 'She Said' In The UK
By Maxine Harrison
Yes, That's Lindsay Lohan's Sister Singing In The 'Falling For Christmas' Movie
By Radhika Menon
Get Even More From Bustle — Sign Up For The Newsletter