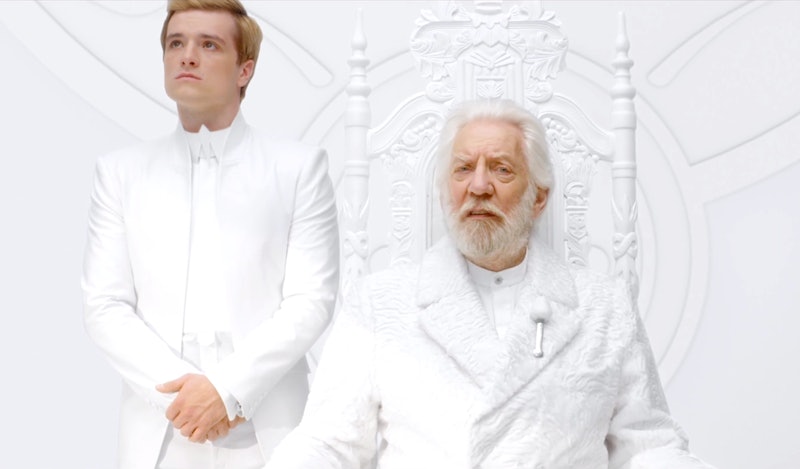 We've come a long way with The Hunger Games. When Jennifer Lawrence's casting was first announced in 2011, she was already an Oscar-nominated actress, but she wasn't the household name megawatt superstar she is today. Josh Hutcherson was still that kid from Bridge To Terabithia. And the world still waited for Hunger Games trailers with baited breath, but it was just different: That was the beginning, and this is the beginning of the end.

When the second teaser trailer for The Hunger Games: Mockingjay Part 1 came out today, it got me thinking: What was the best Hunger Games trailer the world has ever seen? There have been many, after all, and they often get pushed aside in favor of talking about the actual movie, or the actual books. But trailers can be an art all their own. The editing, the pacing, the music — there's technical skill at play we rarely talk about, not to mention that many of these have to fit an entire franchise's thesis statements on character arcs, tone, and politics into segments usually less than three minutes long.

So I'm ranking them.

I should disclaim that I did take one, tiny shortcut: I'm not bothering to include any of the teasers that consist entirely of a burning bird on a pendant, because that's not a teaser — that's a glorified gif., and that's no fun. The rest, however, are quite fun.

9. The First Ever Teaser

Aired during the 2011 MTV Movie Awards, I remember being so psyched for this that I actually watched the MTV Movie Awards. And I wasn't disappointed at the time, but looking back — well, I'm kind of disappointed. This is basically just Katniss running through the woods while Gale tells her she's important. Also there's a little bit of fire.

There's a cryptic voice-over from President Snow and a funky beat, but the rhythm's just not as on-point as so many of this trailer's competitors, and a good trailer's all about the rhythm.

It's not bad; it focuses on Katniss and Prim's relationship and how it motivates Katniss, which is a core component to the series. It just doesn't have the spark of some of the ones higher on the list.

The trailer's really picked up a lot more energy with the second movie. This one does a good job of showing Katniss's personal struggle turned political, and makes good use of one of Snow's best lines: "Would you like to be in a real war?"

I might be cheating with this one because it's half trailer and half featurette, but it's pretty dang cool so I don't really care.

It's so tightly-edited and assuredly epic that it's making me excited for a movie I've already seen.

The interruption by the District rebels is gold, and it's kind of making me want to go find a revolution to fight.

This one nailed the tone by not focusing just on the big action — a trap giant blockbusters could easily fall into — but on the political and the personal tone of the series. It actually manages to be kind of haunting.

More trailers are certainly on their way, as Part 1 hits theaters this November. Can't wait.