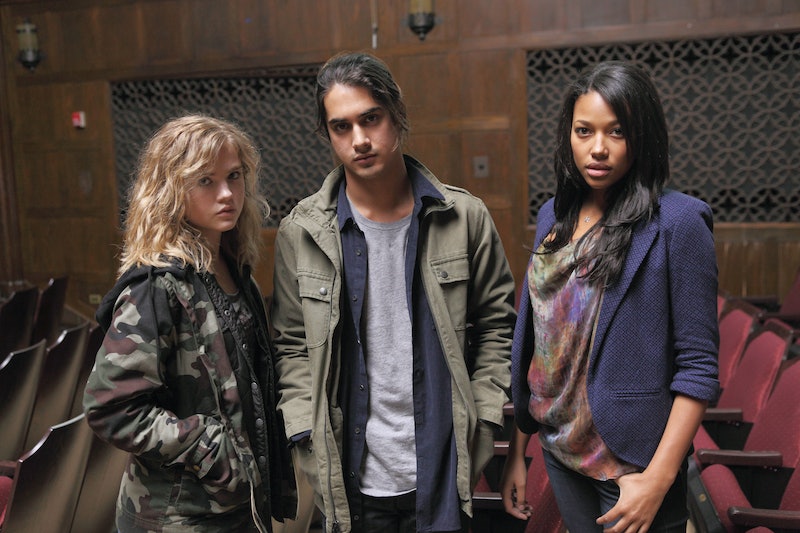 UPDATE: Terrible news, Twisted fans. ABC Family has canceled Twisted . EARLIER: I'm a sucker for a dark teen drama, and ABC Family's sinister series delivered on both the darkness and the drama in spades. What Twisted didn't deliver were high ratings, which is why Twisted 's fate is looking bleaker and bleaker on ABC Family. For those of you who didn't watch this part snarky, part suspenseful series (and from the ratings, it looks like very few of you actually did) Twisted is about 16-year-old Danny Desai who returns to his hometown of Green Grove after spending years in juvie for murdering his Aunt Tara. When a student at Green Grove High School is murdered hours after Danny arrives home, the entire town is quick to point fingers at the child murderer — all except for his former BFFs Jo and Lacey, who team up with Danny to find out the truth. The truth is very messy — so messy that the show couldn't possibly reveal all of the answers to our questions in just one season.

Unfortunately, that might be all Twisted fans get. Though the series has a loyal fanbase (apparently they sent ABC Family 1000 red jump ropes in support of the show!) the Twisted ratings are lower than recently cancelled Pretty Little Liars spinoff Ravenswood (obviously, not a great sign) and ABC Family isn't showing any signs that they're itching for another season. I feel your pain, Twisted fans — I have way too many questions about where the show was going to accept that the answer is... nowhere.

What questions did Twisted leave us with? Here are the things I'd love answered — hopefully with a second season. (Pretty, pretty please!)

What Is Up With Whitney And Jack?

The short answer is that they are really bad news. Like, "Let's-mess-with-the-Desai's-for-money-and-possibly-revenge" kind of bad news. Though we learned that both Whitney and Jack were in cahoots with the absolutely bonkers Charlie, it's clear that there's much more to their backstory that we haven't learned yet. Like, I don't know, why are these two so cray? What did Danny's dad do to make them so mad?

And come on, Whitney — I know you're a liar, but please tell me that kiss with Lacey was at least kind of legit. Sorry, Danny, but Whitney and Lacey actually had chemistry to work with.

Charlie was Danny's roommate in juvie and — surprise! — also Aunt Tara's secret son. (How Aunt Tara could babysit Danny for years and never mention her own child is not lost on me.) Anyway, he goes all Single White Female on Danny which culminates in him taking Jo, his pseudo-girlfriend, hostage. Jo's dad Chief Masterson comes in to save Jo, gun in hand. That's when Tess, Jo's mother, runs into the room and announces that he can't hurt Charlie — because Charlie is her secret son. (Which, yes, means that Jo hooked up with her half-brother, which, yes, is icky.) The screen then goes black, and a single gun shot rings out.

This is an ABC Family drama, so let's assume that the gun shot meant that someone in the room got shot. So, now the question is... who was it? Chief Masterson was pointing the gun at a knife-wielding Charlie, who was holding onto Jo — it could easily be either of them. Or, Charlie could have wrestled the gun away from the Chief, meaning that any of the other people in the room — Lacey, Danny, Tess, and the Chief himself — could have been hit.

Who's Really "The One" For Danny?

Here's a really bad idea: Alienate your only friends in town by macking on both of them within weeks of each other. During the first half of Season 1, Danny was all about Lacey — and Lacey was all about Danny. Unfortunately, Danny changed his mind really, really quickly, and started pining after Jo, who, let's be honest, was pining after him the entire time.

The whole thing was very One Tree Hill (obviously Jo was Peyton, because the angst and the hair), but despite the comparison I'm still not sure which girl Danny was meant to end up with. Sure, Jo and Danny have a fantastic friendship, but Lacey and Danny did share some side-eyes on the way to rescue Jo from psycho Charlie. If we lived in a world where I got a say in who Danny ended up with, the answer would be that #JoIsTheOne.

No But Seriously, What Happened To Regina?

Regina was the girl who got murdered when Danny came back to Green Grove. He was the prime suspect in her murder, and the murderer's identity was the focus of the first half of Season 1. Then, when Danny's father, Vikram, reappeared on the scene (albeit briefly) the Regina's murder storyline was basically... dropped. Well, sort of. Danny's father's private investigator allegedly killed Regina and had Danny framed for the crime, but we never found out why, exactly, they wanted to off poor, promiscuous Regina in the first place. Considering that the show started with Regina's murder, it would be great to see them come back to that plot point — when they aren't too busy dealing with all of the con artists running around Green Grove, that is.