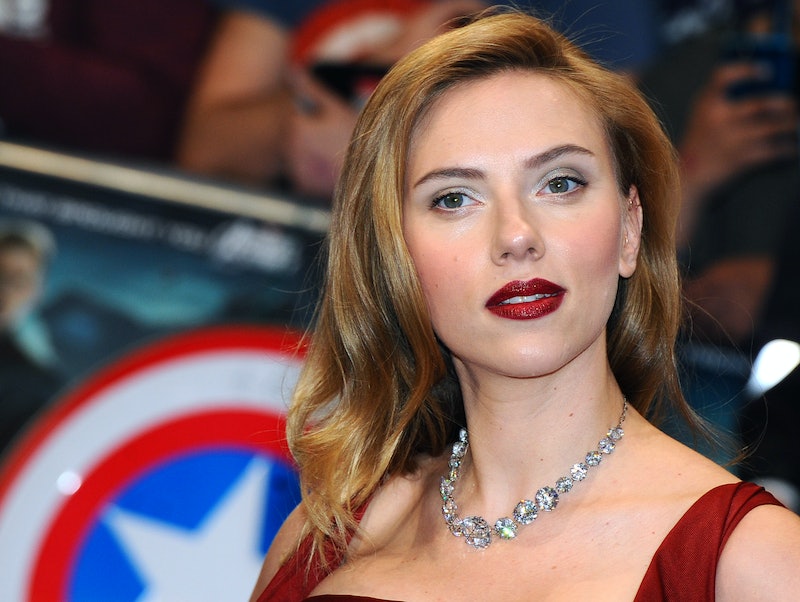 This week, Scarlett Johansson won a court case in France — over a book character. The problem? The actress character in French author Gregoire Delacourt's The First Thing We Look At was explicitly based on Johansson, and she was really not flattered. At all. (Johansson called it a "fraudulent use of her personal rights." Delacourt called it "a love letter." Lost in translation, perhaps.) But it's not the first time a celebrity's been portrayed revealingly in a novel — or that they've protested about being immortalized, warts and all, in fiction.

Sometimes people can be amused by their fictional counterparts: The science teacher on whom J.K. Rowling based Severus Snape, John Nettleship, apparently thought it was funny. Others, however, have not been so humored. The long list of celebrity portrayals in fiction includes books that led to court cases, breakups, and at least one retreat into priesthood to avoid publicity. (As you do.) Unfortunately for the subjects, readers always love lapping up the scandal of the well-known, particularly if it's veiled in a roman à clef. Fiction may fade, but celebrity bad behavior is forever.

Here are 11 characters in fiction who had their origins in very real people and some very infamous acts — allegedly, of course.

1. Neal Cassady as Dean Moriarty: On the Road by Jack Kerouac

Kerouac is famous for immortalizing his pals in his fiction. On the Road featured a range of thinly disguised characters from the Beat Generation, but handsome, pill-popping Dean Moriarty is one of the most famous — and he corresponds very closely to writer Neal Cassady (right), Kerouac's lover at the time. Indeed, in the first scroll of the book, Kerouac didn't bother to change Cassady's name. Moriarty isn't a sympathetic character — he's a bigamist and a conman — but he does at least seem fun.

Cassady never protested the portrayal, though, despite the unflattering qualities. Indeed, he seems to have been a professional muse, and was the inspiration for other members of the Beats, too: he's reportedly the inspiration behind the protagonist in Ken Kesey's One Flew Over the Cuckoo's Nest .

Wilde's most famous character, the eternally beautiful Dorian with his aging portrait, was actually based on a real, exquisite acquaintance: John Gray, a "young Adonis" who moved in the same circles as Wilde in 1890s London. Wilde apparently adored him, and they may have had an affair.

The name change wasn't actually an attempt to hide Gray's identity, but rather a pointed reference: the Dorians were an ancient Greek group who practiced pederasty. Gray was seemingly not impressed by Wilde's portrayal — he started libel proceedings after a newspaper alleged he was the inspiration for the scandalous novel. Then he totally withdrew from his old life to become a priest.

3. Frank Sinatra as Johnny Fontane: The Godfather by Mario Puzo

The parallels between Frank Sinatra's life and the story of Johnny Fontane in The Godfather, which was made into the famous film series by Francis Ford Coppola, are legion. Both were singers who suffered voice weakness and made their way into movies, and were suspected to have strong Mafia ties.

But Puzo was careful to avoid reprisal: He always insisted that his story was completely fictional, even if some characters were surprisingly close to real-life gangsters in basically every way. Sinatra, for his part, insisted, "Any report that I fraternized with goons or racketeers is a vicious lie." That doesn't really explain why the FBI's file on him was 1,300 pages long, now does it?

Anna Wintour must have sent Meryl Streep some flowers after her performance in The Devil Wears Prada earned her an Oscar nomination; now, perhaps, when people hear the name Miranda Priestly, they might immediately think of Streep's terrifying white-haired editor from hell rather than Nuclear Wintour herself.

Weisberger made her name with the book, which was basically a take-down of her entire time spent as a long-suffering assistant to an unnamed editor at an elite magazine — but Wintour never sued. She even turned up to the movie's premiere wearing Prada. Now that, for all her reputation, shows a sense of humor.

5. Tom Cruise as Steven Weller: The Actress by Amy Sohn

The Actress by Amy Sohn is a new title, but it's already shaping up to be a bombshell fictionalized account of the marriage that moved more gossip mags than Brangelina: Tom Cruise and Katie Holmes.

Whether either Holmes or Cruise will sue — not together, obviously — may depend on just how much the book harps on the homosexuality rumors surrounding Cruise. And it seems that it does — a lot. So watch this space...

Dashiell Hammett's sweetly sparring married detectives, Nick and Nora Charles, inspired a host of hit films and radio shows, but the relationship on which they were based was apparently less happy. For 30 years, Hammett dated award-winning playwright and writer Lillian Hellman, author of The Children's Hour and The Little Foxes, and she inspired Nora Charles.

Hammett and Hellman were a bit rockier than Charles, though, with an on-off relationship and plenty of affairs on both sides. And apparently when Hellman discovered that she was the inspiration behind Nora, he told her not to get too big-headed: He'd based the villainess on her, too.

7. Jean Paulhan as Rene: The Story of O by Anne Desclos

Apparently, it was, in part, a challenge because Paulhan didn't think women could write erotica. (Nice call on that one, eh?) Desclos didn't reveal her identity, and consequently the identity of her lover, to the public until 1994, but Paulhan was not present. He had died in 1968, after living with Desclos for 14 years.

That the beautiful, androgynous aristocrat Vita Sackville-West was the inspiration for Virginia Woolf's Orlando has never been in doubt: Virginia was explicit that she was "writing Vita" in her diary. Indeed, Orlando lives in Sackville-West's ancestral home, and upon publication Vita was presented with a leather-bound copy and promptly declared herself narcissistically "in love" with Orlando herself.

The two writers had an intense affair, but Vita never appeared to regret or repress her status as Orlando and was deeply broken up by Woolf's suicide.

9. Anthony Blunt as Victor Maskell: The Untouchable by John Banville

Banville's The Untouchable never pretends to be about anything other than a real person: Anthony Blunt, the celebrated English art historian who was stripped of his knighthood after it was revealed that he was a Soviet spy.

But Banville's novel came more than 10 years after Blunt's own death in 1983, and he didn't have to worry about being unmasked in fiction. Prime Minister Margaret Thatcher had already done that in 1979.

Joyce Carol Oates's novella Black Water was born when she "began to take notes" after the infamous Chappaquiddick Island incident, in which Mary Jo Kopechne drowned when Senator Edward Kennedy drove them both off a bridge on July 18, 1969. He swam free, but failed to get help for nine hours.

In the novella, "The Senator" leaves Mary Jo's counterpart, Kelly Kelleher, to drown, and we witness her last moments. Oates, however, was careful to say that she "wanted the story to be somewhat mythical" rather than exactly biographical — and Edward Kennedy never commented on the book's publication.

For a certain period of history, you weren't anybody in French intelligentsia until Simone de Beauvoir had an affair with you. So when she released The Mandarins, a book about disillusioned French intellectuals bearing strong resemblances to all her friends, we could excuse them a pang of anxiety.

However, even though the book is very obviously personal in its parallels, detailing Beauvoir's fall-out with lover Nelson Algren and the unflattering breakdown of the friendship between Camus and Sartre, Beauvoir always insisted that it was fictional: "I tried to depict present-day people, men and women who are in somewhat the same situation as us. But there are thousands of people like that." And Sartre himself never worried — he thought The Mandarins, a philosophy-heavy book, was actually a fitting sequel to his own Road to Nowhere .

More like this
16 Novels That Paint A Realistic Portrait Of Abortion
By K.W. Colyard
5 Gripping Books To Read From Women’s Prize For Fiction Winner Ruth Ozeki
By El Hunt
10 Must-Read Books Out This Week
By K.W. Colyard
Nina LaCour Had To Grow Up To Write 'Yerba Buena'
By Casey McQuiston
Get Even More From Bustle — Sign Up For The Newsletter