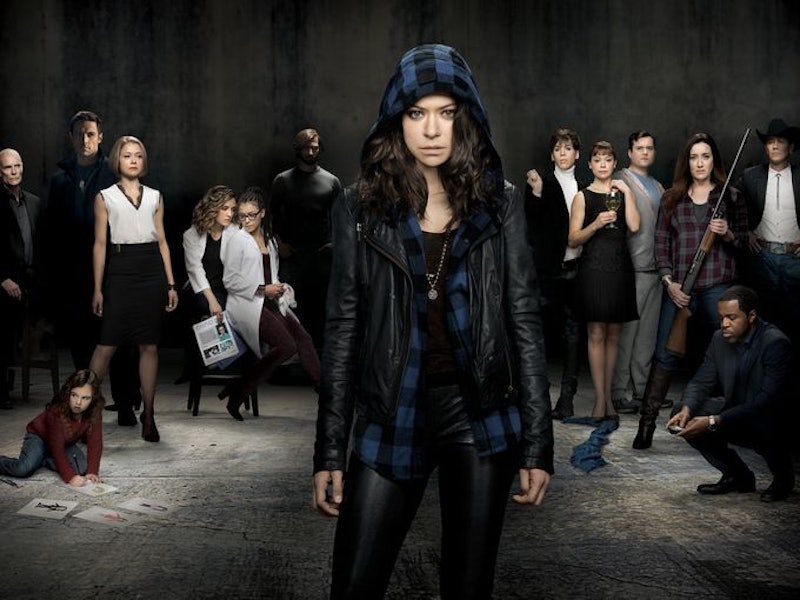 Early contender for today's biggest entertainment world shocker? Unfortunately, this one is easy: The nominations for this year's Emmy Awards were announced in L.A. this morning, and while no-brainers like Breaking Bad and True Detective both received nods, one glaringly absent series from every single category (even lead actress!) was none other than BBC America's critically acclaimed sci-fi series Orphan Black. That's right — yet again, the Emmy Awards have snubbed Orphan Black .

I guess we should have seen this coming, really — despite series star Tatiana Maslany receiving a nomination at the Golden Globes last year for her astounding work playing not one, not two, not three, not four, but multiple clone characters in the series, awards shows have never been particularly kind to the sci-fi genre (see: Buffy the Vampire Slayer 's lack of nominations), and Orphan Black is pretty much defined by its science.

Still, that doesn't mean none of us shouldn't be angered by the snub. Maslany, particularly, deserved it this year, especially after the season finale that involved her portraying four clones in the same scene. And the most angry of us all should really be the clones themselves, really — so in an effort to help process the Emmys snub, here's how each clone would react to this terrible news:

Considering her upbringing, Sarah's likely been conditioned not to always expect the worst, and be skeptical when the best happens. So she'd probably be outwardly unreactive that the Emmys snubbed the series — after all, showing disappointment is weakness.

Inwardly, however, she'd be disappointed...

At first. If the five stages of grief for most people are denial, then anger, then depression, for Sarah it would definitely be anger after sadness — and there'd be a lot of it.

Also, a lot of fun British curse words because as tough as she likes to appear, Sarah is an adorable little Brit.

We've only seen Cosima disappointed a handful of times, and it generally has to do with Delphine-related issues. So based off of those reactions, Cosima would likely be extremely disappointed and possibly feel a little helpless that there was nothing science-related she could do to fix this terrible mistake...

Then she'd get high with Delphine, and they'd be the most adorable couple ever together. Obviously.

Alison would definitely try to keep her real feelings about the situation (white hot anger!) under wraps because she is a WASP, and WASPs don't have feelings, obviously. Instead, she'd try to get her emotions out in healthy, constructive ways. She'd stretch...

She'd try to bake, but then would get a little too tempted by the very sharp knives...

Alison can be one scary lady when she wants to be. The Television Academy would not know what hit them.

Rachel would be angry, viciously so —

But she'd also get even in the most calculated way, probably with crazy eyes and kidnapping involved. That's just how Rachel rolls, y'know?

She'd probably just end up getting stabbed in the eye with a pencil anyway, though. Life sucks.

Rachel wishes she could be half the psycho that Helena has the ability to be. While Helena would definitely be violently sad at first...

But she'd get to vicious fairly quickly.

And vicious would lead to pyromania...

Of course, Helena is smarter than most give her credit for — she'd deny everything if she were asked.

And then she'd go find her true love, Jesse, who — as she says — went away to be a tow-truck driver.

Live happily ever after, kids.

Tony would shrug because Tony's too cool for this BS.

And who needs the Emmys when you're hot?