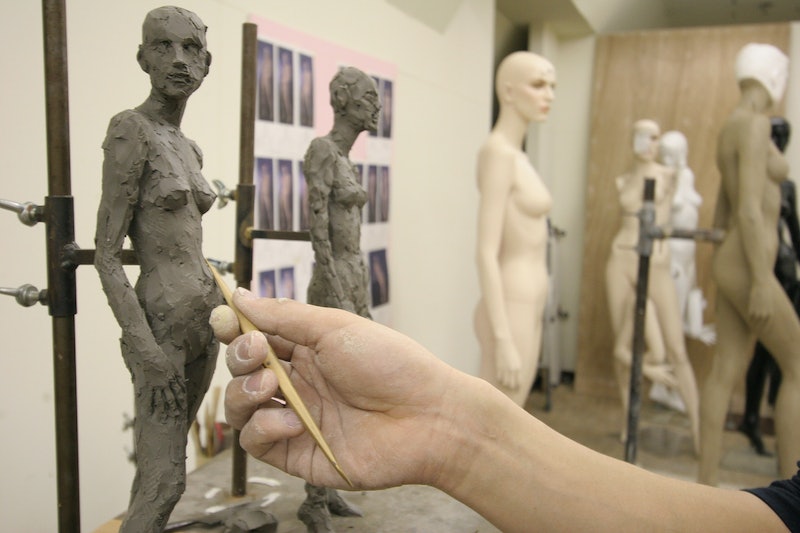 It's never cool to comment on someone's weight or lifestyle. Not only is fat-shaming hurtful, it actually leads people to put on more weight. But what about our bone-poking and comments about small low-fat meals to thinner people? Is skinny-shaming really all that different? Not according to Emma Woolf, author of The Ministry of Thin. In a piece about skinny-shaming for The Guardian , she argues that judging someone's weight is never OK, and the girl has a point.

Woolf battled with anorexia for many years. Along with her disorder, Woolf had to deal with feeling like her body was on display as people openly commented on her appearance. Of one older and plumper coworker who told the whole room Woolf was nothing but "skin and bone," she comments, "She was drawing attention to my size in a way that would have been unacceptable had I done the same to her." Recovered from her unhealthy weight loss, Woolf wrote The Ministry of Thin to get us to focus on health rather than size.

After her book was published, Woolf received an intensely unfriendly response from some women. "I was called a skinny bitch, a body fascist, and a fat-Nazi. I was informed that men 'love something to grab on to', and that 'curves' are sexier than skeletons," she explains. Accepting bodies of larger sizes is such an ingrained part of feminism that we often forget how this might backfire.

We're so careful to avoid the term fat, but we rarely shy away from describing someone as skinny, thin, skeletal, etc. — often even to their faces. This is due in large part to the fact that we often deem thinness – rather than health – the most desirable thing for our bodies. Yet being thin or underweight is as personal a matter as being bigger or overweight. If we're not to shame people for being an unhealthily heavy weight, we should not shame women who have a slimmer figure. Rather, we should stop obsessing about outward appearance and take a closer look at lifestyle choices. Woolf, for one, is tired of having to justify herself:

I'm fed up with being judged for being physically disciplined, for watching what I eat, and for exercising five times a week. Other things a thin woman is not allowed to say: "it takes willpower to stay slim"; "of course it would be easier just to eat anything I wanted but I don't"; "yes, I'm often hungry mid-morning but I wait until lunchtime". Above all, a slim woman must never say: "I prefer being slim."

Have we really reached a point where we can't even be proud of our healthy and beautiful selves, no matter what we look like? Feeling apologetic for a smaller waist size can get old, the same way a bigger size is nobody else's business. Being thin is a personal matter, and shouldn't be something to feel embarrassed about, or something seen as a slap in bigger people's faces. If you eat well and take good care of your body, you should be entitled to feel proud of what you look and feel like, no matter what your size.