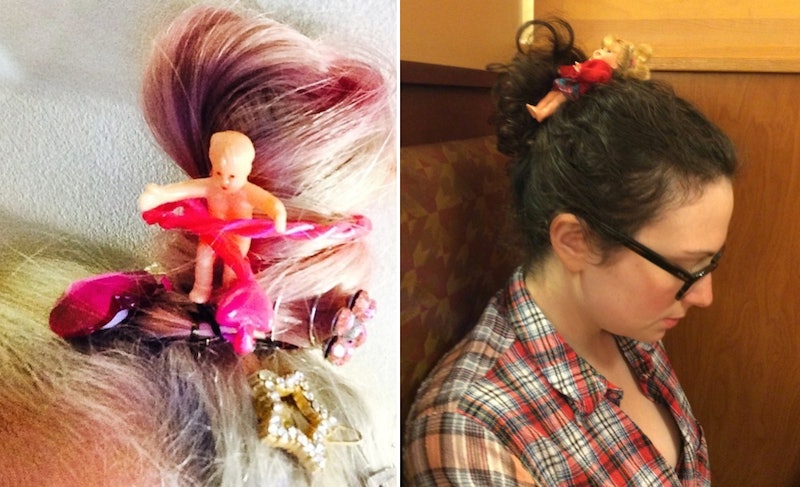 At the beginning of July, Miley Cyrus posted a selfie in which her updo featured a plastic baby doll strapped to her head. The look was a lot so, naturally, I decided to test-drive a similar style out in the real world and see if I could get a response. What resulted was a social experiment far more about the utter lack of attention people pay to their surroundings than about what happens when you wear a wacky hairstyle in public.

But let's start at the beginning. First thing in the morning, I strapped a toddler-age Barbie doll to my ponytail, making the critical decision to leave her clothed (unlike Miley) because I'm not famous and didn't want to be stopped for questioning by the police ("Excuse me, ma'am, why are you wearing a naked baby on your head?"). I looked like a grown woman getting ready to go to the American Girl Place. Because I work from home, I didn't have the pleasure of shocking my coworkers with my hot new do. But I did have my mom.

She took one look at me and said, "I hate you. I can't believe you're making me go out with you like that." My mom doesn't actually hate me, so everybody can calm down. But she wasn't pleased that we were about to go on our morning walk through suburbia while I had a plastic doll strapped to my head. We took to the streets.

Me just being Miley.

During our walk, I noticed the doll had more of an effect on animals — albeit the response was probably inferred from my desperate desire to alarm someone. Humans generally stared straight ahead or at the ground, so if they saw my hair, I wouldn't even have known. But the animals... Birds fled from the trees. A dog avoided eye contact. My mother began singing "Hello, Dolly!" Only one lady stared like I'd sprouted a third eye.

Disappointed by the lack of whiplash I'd induced, I texted a photo to my boyfriend.

"How avant garde," he said.

"Should this be my new thing? Would you still love me if I wore a doll in my hair every day?"

"No and yeah, unfortunately."

Cute, but not what I was expecting. I spent the morning working at home and sent another photo to my father. His response? "What the hell kinda hairdo is that? Is that a bun? Cute picture! Oh wait, is that a doll in your hair?

He ultimately decided the doll was cute, as did my grandmother, who I met at Panera Bread for lunch. "Oh, isn't that adorable!" she cried. I rolled my eyes. Where was the horror I was expecting? Where were the strangers doing double takes? Hardly anyone looked at me like I was crazy because hardly anyone even noticed I was wearing a doll.

People were just too wrapped up in themselves to see the 23-year-old woman lunching on pesto and wearing a child's toy as a hair accessory. I suppose I shouldn't have been surprised. I notice everything because I am a writer and a classic introvert, but many people aren't nearly as observant. And I was relieved that no creepy men used my accessory as an opportunity to leer and be inappropriate.

There was another refreshing finding about my Miley experiment: The few strangers who did see my hair gave me big, encouraging smiles, like I'd brightened their day just by being a weirdo. Those people were definitely in on the joke.

I was able to forget that I had Barbie's daughter in my hair until later that night on another walk with my mom. We passed a teenage boy, who, at first, glanced at me as he thought I was cute until he saw the doll and his eyes glazed over in terror. But whatever, he was wearing a high school lacrosse T-shirt so who cares what he thinks.

More like this
Is Miley Cyrus Wearing Liam Hemsworth's Suit In Her "Flowers" Music Video?
By Allie Fasanella
The 12 Buzziest Hair Color Trends Of 2023
By Jordan Murray
Pamela Anderson's Most Iconic Makeup & Hairstyle Moments
By Olivia Rose Rushing
9 Valentine's Day Hairstyles For 2023 That Look So Dreamy
By Audrey Noble
Get Even More From Bustle — Sign Up For The Newsletter
From hair trends to relationship advice, our daily newsletter has everything you need to sound like a person who’s on TikTok, even if you aren’t.