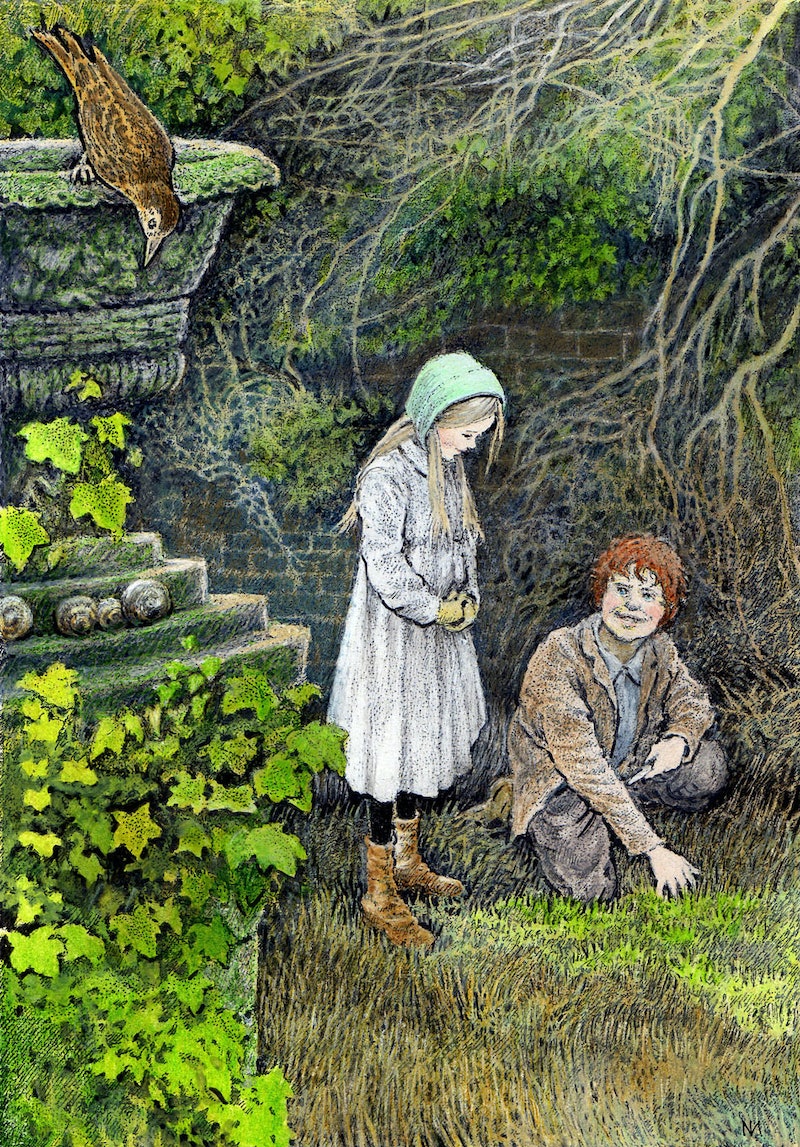 For more than 100 years, Frances Hodgson Burnett's tales have endured. Cedric Errol, otherwise known as Little Lord Fauntleroy, is still a quintessential rags-to-riches story. Sara Crewe of The Little Princess taught us that people will always be cruel to those who are different, and so it is all the more important to stay true to the self. And Mary, Colin and Dickon of The Secret Garden showed us the magic of the real world.

Perhaps part of why Hodgson Burnett's children's novels have stayed engrained in our culture is because unlike many kids' books, they aren't bound by the fantastical. Their wonderment lies in the very possibility of the unfolding events within them. This is especially true of The Secret Garden, in which three little children discover the mysteries and enchantment of the world right outside their windows.

The Secret Garden — a novel that celebrated its 100th anniversary in 2011! — doesn't house knights in shining armor or wicked witches of the east or west. It's simply about growing and learning and exploring and meeting people who change your life. It is not a fairytale in the sense that things are never all good. Its characters are exposed to grief and loss and death, just as we are day to day. In fact, within the first pages we learn that our protagonist Mary's mother prioritized a dinner party over the health and safety of her husband, her friends, and her daughter. But the beauty that does exist is the beauty of the real world. Beauty is in the things we can all see and the moments we can experience — if only we allow ourselves to do so.

When we first get to know protagonist Mary, she is a disagreeable little child who has been simultaneously spoiled and neglected. But Mary doesn't see these traits in herself — only in others. Only through learning and exploring and growing wiser does she begin to see her own flaws and make an effort to change them.

It's Normal To Fear What We Don't Know

The unknown can be scary. And when Mary arrives onto the moors of Yorkshire after living in India her whole life, she hates everything about the land, the house, and the people. But Martha, her pseudo-handmaiden, explains simply, "That's because tha'rt not used to it."

Independence Is A Beautiful Thing

For the first 10 years of her life, Mary has never had to do anything for herself, always having servants to "salaam" to her and cater to her every need. But when she arrives at Misselthwaite Manor, Martha bluntly tells her, "My mother always said she couldn't see why grand people's children didn't turn out fair fools — what with nurses an' bein' washed an' dressed an' took out to talk as if they was puppies."

Learning To Do Without Molds You Into A Better Person

Though she grew up very much without the love of her parents, what Mary did have was privilege. Toys. A surplus of food. Anything she wanted. But she learns that it is only through not having something, or going without something you love for quite some time, that you learn to appreciate it. When Mary initially arrives and refuses to eat — or throws away perfectly good meals — Martha expresses that Mary cannot fathom how lucky she is in comparison to her 12 brothers and sisters who so often go to bed with hungry bellies.

Never Underestimate The Power Of A Smile

When we are introduced to Ben Weatherstaff, the surly old gardner, Mary notices just how much friendlier he looks when he actually smiles. Instantly, she goes from fearing him to finding him quite intriguing.

Always Say What You Mean

Ben teaches Mary that folks from Yorkshire are taught to speak the truth, however harsh it may be. He bluntly tells her, "We're neither of us good-lookin' an' we're both of us as sour as we look. We've got the same nasty tempers, both of us, I'll warrant." And oddly enough, Mary respects and actually likes him for being so honest.

Fresh Air Is Good For The Body And Soul

While in India, Mary let the heat keep her indoors, and as a result, she was constantly pale and ill. Upon moving to Yorkshire, though, she learns that running and playing and breathing in the clean air "[filled] her lungs with something which was good for her whole thin body and whipped some red color into her cheeks and brightened her dull eyes."

Animals Can Be The Greatest Friends Of All

When Mary first bonds with the red robin that's taken a fancy to her, she says, "He was a real person — only nicer than any other person in the world." Animals can give us the most genuine love and friendship imaginable, and that relationship isn't something to belittle or mock.

Martha's mother sends Mary a skipping rope to occupy her time, and Martha tells her that she can skip up to a hundred in one go. But Mary learns that that kind of talent takes time. She can only skip 20 at first, but as she grows stronger, healthier, and fitter, she can do just a little more every day.

Gaining Weight Is Sometimes A Sign Of Good Health

One of the first signs of Mary's improving health (and later on of her cousin's Colin) is her weight gain. Both children grow fatter as they become healthier and stronger — and the adults around them are quite pleased at the sight, especially the adults that cannot afford to eat as much as they would like. Mary and Colin begin to appreciate food, and feel grateful at having it at their disposal as they learn that not everyone is so lucky.

Not Everything Has To Be Perfectly Orderly

As Mary befriends Dickon (Martha's 12-year-old brother) and the pair discover the secret garden that's been hidden away for ten years, Mary tells him, "Don't let us make it tidy. It wouldn't seem like a secret garden if it was tidy." Oftentimes there is beauty in the natural state of things, even when that natural state is one that appears unkempt.

When Mary meets her secret cousin Colin (who has been kept away under the belief that he is a sickly, crippled child), he tells her, "If you stay in a room you never see things." The seemingly obvious statement has a far more profound meaning, though. To have experiences, and see the world around us, we must be prepared to leave the comfort of our bedrooms.

To Be Angry At Those Who Die Is Human Nature

Colin confesses to Mary that he is quite angry at his mother for dying. And though she couldn't help it — and though deep down he understands that — he cannot help but feel abandoned, and thus he cannot help but resent her. Losing someone is never easy, no matter the circumstances. Our anger is subsequently inevitably at times, but has a certain healthiness to it.

We Often Love Those Who Help Us Forget

Although bad experiences are just as important to have as good experiences in terms of the lessons they instill, we often gravitate most toward the people who help us forget the bad things. Colin loves Mary right away because her presence makes him happy, and allows him forget how miserable his life has been up to that point: locked away, without friends or family or companionship of any kind.

Sometimes Yelling Does The Heart Some Good

Like Mary before she moved to Yorkshire, Colin is also quite a pampered, spoiled young boy. He is prone to tantrums and fits of rage. But when Mary stands up to him, and the two get into a heated argument, Colin begins to realize he has been out of line. His nurse even says, "It's the best thing that could happen to the sickly, pampered thing to have someone to stand up to him that's as spoiled as himself."

Our Minds Will Often Control Our Bodies

For his entire life, Colin has feared inevitable illness. His father is a hunchback, and so he spends 10 years in bed, avoiding movement so as not to develop one too. But "most of his fright and illness was created by himself" and the less afraid he becomes of illness, the stronger he becomes physically.

The Moments We Feel Invincible Stay With Us Forever

"One of the strange things about living in the world, is that it is only now and then one is quite sure one is going to live for ever and ever and ever." When Mary and Dickon introduce Colin to the secret garden, he experiences one of these moments. And it is that very sentiment that motivates his recovery, both psychological and physical.

One of the things Colin has hated most is the whispering that has surrounded him through his life. Ben Weatherstaff tells him, "Th' world's full of o' jackasses brayin' an' they never bray nowt but lies," when he refers to all the rumors about Colin being both crippled and unintelligent. Though Colin is initially outraged, he uses his anger toward the "jackasses" to begin to walk and run and dig in the dirt and grow stronger every day.

There Is Magic In The World

In one of the most touching, introspection-inducing passages of the novel, Colin tells Mary, Ben and Dickon, "There must be lots of Magic in the world. But people don't know what it is like or how to make it. Perhaps the beginning is just to say nice things are going to happen, until you make them happen." There is magic in the secret garden. There is magic within Dickon that allows lambs, ponies, foxes and rabbits to befriend him. There is magic within the walls of Misselthwaite Manor. And though the world is not always a beautiful place to be, beauty never disappears entirely.

If You Give Something Care And Attention, It Will Flourish

Dickon's mother, Mrs. Sowerby, reflects that anything Dickon touches will grow. His potatoes and cabbages are twice the size of anyone else's in all of Yorkshire, and she is certain it is because of his love for gardens and all things found in nature.

There Is Nothing Quite As Beautiful As Hope

As the book is wrapping up, the unnamed narrator muses, "At first people refuse to believe that a strange new thing can be done, then they begin to hope it can be done, then they see it can be done — then it is done and all the world wonders why it was not done centuries ago." Human beings seem to naturally be afraid of change and the unknown, but whenever they have the courage to delve into new things, new experiments, new cultures, they always seem to find something beautiful. When Mary, Dickon and Colin explore the secret garden, it opens up new and unchartered territories, and along with it, new and unchartered ways of thinking.

More like this
16 Novels That Paint A Realistic Portrait Of Abortion
By K.W. Colyard
'The Summer I Turned Pretty' Book Ending Is An Emotional Rollercoaster
By K.W. Colyard
10 Must-Read New Books Out This Week
By K.W. Colyard
Ottessa Moshfegh Is Happy To Be Your “It” Girl
By Arya Roshanian
Get Even More From Bustle — Sign Up For The Newsletter