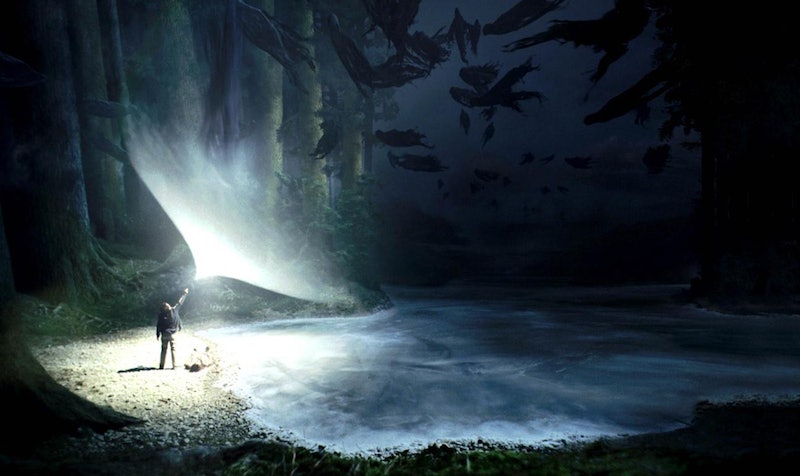 If there's one thing more important to Harry Potter fans than whether or not Ron and Hermione belong together, it's knowing the correct pronunciation of Wingardium Leviosa. (And the "swish and flick.") Because what else would we use our over-priced-but-necessary imitation wands for? However, every good Potterhead knows that while it's Harry Potter and the Sorcerer's Stone's most iconic spell by far, the Levitation Charm is far from the most impressive spell in the series. So which of the Harry Potter spells come out on top? With so many to choose from, it's almost impossible to rank every spell. Instead, I've compiled all 8 Harry Potter films to see which is best when it comes to new and iconic spells. Why? Because it's that wonderful time of year again — ABC Family is having a Harry Potter weekend.

I know, it happens more than once a year, but that doesn't make it less wonderful. Harry Potter fans have even more reasons to rejoice, considering we've come up on so many anniversaries for the film and book series, and even the Universal Studios Wizarding World of Harry Potter, in the past few months. So since we're revisiting the phenomenon that shaped a generation anyway, it only seemed right to rank the Harry Potter films in a new way.

Just in case you find out that you're a wizard tomorrow and need to run off to fight the risen Dark Lord and you need a refresher on the best spells to have in your wizard's arsenal (you know, standard stuff), here's how each Harry Potter movie stacks up by best spells.

Last but not least, the end-cap on the series — we always knew that Hogwarts was surrounded by enchantments beyond our magical comprehension. But when little Professor Flitwick came out with this protective charm that cast a bubble around the castle that incinerated anyone and anything that tried to come through it, we knew that these teachers weren't messing around. Long live the Battle of Hogwarts. But Deathly Hallows Part 2 lands the lowest ranking because, frankly, we'd seen all of this before — including Harry's Expelliarmus.

Another sort of light film spells-wise. But who could ever forget this chillingly menacing moment when Harry finally took the Half-Blood Prince's advice and almost killed Draco in the boys lavatory?

Further proving that no one could've survived anything without her, Hermione came into Deathly Hallows with an arsenal of concealment charms that were sophisticated beyond anything we'd seen her do before. Which isn't surprising, because she's always been a total badass.

5. Order of the Phoenix

Order of the Phoenix didn't really offer us much in the vein of new, amazing spells, since Defense Against the Dark Arts was virtually cancelled that year. (Damn you, Umbridge.) But we did get Dumbledore's Army practicing Patronuses (Patroni?) and Ginny Weasley's unreal execution of the Reductor Curse.

I won't even lie that I'm a little prejudiced about Chamber of Secrets — it's my least favorite book and movie of the entire series. But, the Disarming Charm, which was introduced for the first time during Harry and Draco's duel in the Great Hall, became Harry's signature move. And I'm sure you know it saved him twice against He Who Must Not Be Named.

You're probably surprised that the film that introduced us to Potter, Hogwarts, and the Standard Book of Spells didn't get the number one spot on this ranking. While the handy Levitation Charm gave us the best Hermione moment ever and the Full Body-Bind Curse made Neville stiff as a board, Sorcerer's Stone comes in at number three. Mostly because, while important, none of these spells really have that wow factor.

Even though Barty Crouch Jr. posing as Mad-Eye Moody and torturing/killing that spider for class demonstration was horrifying, this was the first time we saw the Unforgivable Curses in action — including the one that made Harry Potter famous. But aside from those, fans were also introduced to possibly Harry's second-favorite spell — I still have, "Accio Firebolt!" ringing in my ears — and the delightful Confundus Charm.

This is indisputably, undoubtably, the only clear number one of this ranking. I don't think there's ever been a more fun Harry Potter scene than when Professor Lupin teaches his Defense Against the Dark Arts class how to expel a boggart. And do I even need to tell you that the Patronus Charm is the greatest spell in Potter history? Azkaban, on spells alone (not even considering Gary Oldman here), is the greatest Potter film of all.