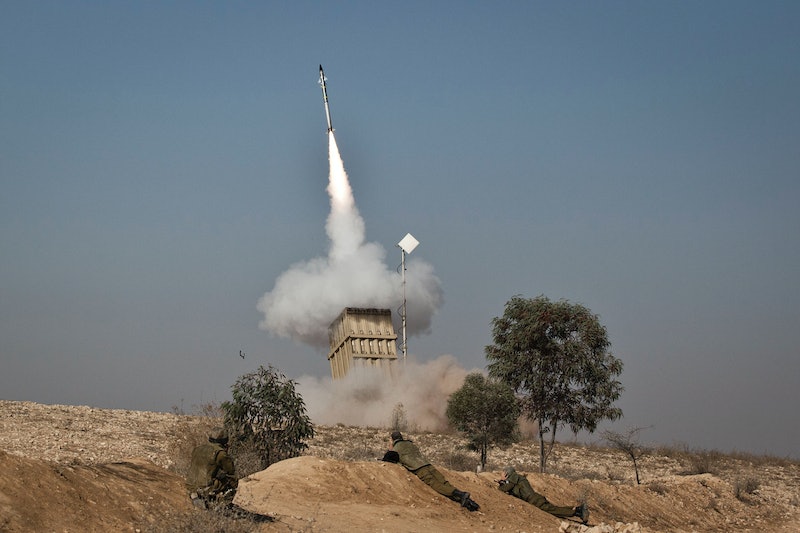 What began with three murdered Israeli teens has the potential to spiral into a full-fledged war. After Israel conducted a violent sweep of the West Bank in search of the teens' murderers, the Hamas government in Gaza sent rockets over the borders and into Israel. Shortly thereafter, Israel launched airstrikes on the Gaza Strip, and by this Friday, over 100 Palestinians have been killed. Israeli Prime Minister Benjamin Netanyahu says that "no international pressure" will compel him to stop the bombings, and the military has advised Gaza’s border residents to leave their homes. Hamas, meanwhile, continues to launch missiles into Israel.

Whenever tensions in Israel flare up, people start chattering about the possibility of a peace deal. But the Israel-Palestine conflict is so gargantuan in scope, so dizzyingly complex, that it can be difficult to grasp what a peace deal would even look like — or, just as importantly, why there hasn’t been one so far. The fact that it’s just about one of the most divisive political subjects in history doesn’t make it any easier to be informed.

Is a peace deal a possibility? Will the current conflict lead to one? And what’s everybody fighting about, anyway? Here’s a primer to the basic contours of the debate.

What does each side even want?

It depends who you ask and when, but to speak in very general terms:

Israel wants a guaranteed end to violence directed at it, and an acceptance of Israel’s right to exist as a state. Palestine wants an end to the occupation of the West Bank and involvement in Gaza. Additionally, both sides claim the city of Jerusalem as their own.

However, there’s massive disagreement and infighting within both the Israeli and the Palestinian camps. For example, there are hardliners in both camps that flatly reject the other side’s right to have its own state. The influence of these internal battles — and of extremists within each camp — on the larger peace process can't be overstated. There are many, many Israelis and Palestinians who want peace, but neither side acts as a unified movement.

Who represents who in the debate?

The Israelis are represented, obviously, by the state of Israel, currently led by Prime Minister Benjamin Netanyahu. Netanyahu has accepted the idea of a Palestinian state while simultaneously accelerating the development of settlements in the West Bank.

The Palestinian Liberation Organization (PLO) is acknowledged by the United Nations, the Arab League, and Israel as the legitimate representative of the Palestinian people, and Fatah is the political party in control of the PLO. Fatah's chief rival for Palestinian influence is Hamas, the militant Sunni Islamic group that governs the Gaza Strip.

What’s the West Bank? And what are these settlements I keep hearing about?

Israel seized the West Bank from Jordan in 1967, which created millions of Palestinian refugees, and the area has essentially been under Israeli military control ever since. Since 1967, Israel has been repopulating the West Bank; it does this by building communities and houses (settlements) and subsidizing Israelis who move in.

Currently, around 2.5 million Palestinians live in the West Bank, compared with a couple hundred thousand Israelis. The Palestinians who live there are subject to significant restrictions and abuses, both by the Israeli military and the Palestinian National Authority, which governs the region semi-autonomously from the Israeli government. The West Bank was the target of many suicide bombings by Palestinian militants during multiple uprisings over the last few decades.

The West Bank is one of the biggest issues in contention. Israel maintains that control over the territory is necessary for its own self-defense. Palestinians condemn the construction of settlements in the region and Israel's treatment of the Palestinians who live there. Palestinians, and nearly the entire global community, consider the West Bank to be illegally occupied by the Israelis.

Why is Israel building settlements in the West Bank?

It's essentially laying claim to that territory. The bigger the Israeli population in the West Bank gets, the easier it is for Israel to claim that its presence there isn’t really an occupation. Some would argue that Israel is expanding its occupation there in order to intentionally make it more difficult to transfer the land into the hands of a future Palestinian state; others would point out that Israel has offered up significant regions of the West Bank in past peace proposals.

Okay. So what’s up with Gaza, and why is Israel bombing it?

Israel took the Gaza strip along with the West Bank and, for over 50 years, both were governed by the Israeli military. However, in 2005, Israel withdrew from the region completely, at which point Hamas and Fatah fought (violently) for control over the region. Hamas won and now governs Gaza (with an iron fis t , it's worth noting). Hamas, which has been designated a terrorist organization by numerous Western countries, rejects Israel's right to exist, and frequently sends rockets over the border, the vast majority of which do not hit their targets. Israel exerts tight control over what comes in and out of Gaza, and periodically bombs and/or invades it.

How have peace talks gone in the past? How are they going now?

It's generally agreed that, for a variety of reasons, both sides mutually distrust one another, and this trust deficit makes the peace process very difficult. The PLO and Israel have both theoretically accepted one another's right to exist, but have never been able to agree on the specifics of a deal that would result in the creation of a Palestinian state.

In July of 2013, U.S. Secretary of State John Kerry announced a new push for a peace deal between the two sides after attempts in 2010 and 2012 failed. A lot of negotiations between the two sides were held, with the U.S. acting as mediator. But the deadline passed — and no peace deal was reached. In June of 2014, President Obama’s Middle East peace envoy, Martin Indyk, resigned and declared the peace process dead.

Why did peace talks fail?

One explanation pinpoints disunity within the Palestinian camp. Israel considers the PLO (and by extension Fatah) to be the legitimate representative of the Palestinian people — not Hamas. But in April, the Fatah and Hamas struck a unity deal. Israel refuses to negotiate with an organization (Hamas) that demands the complete destruction of the Israeli state, and so the unity government — which, by the way, has since been disbanded — alienated Israel from the peace talks.

Another explanation points the finger at Israel’s decision to build more settlements. During the negotiations, Israel agreed to release some Palestinian prisoners in exchange for Palestine agreeing not to join any more international organizations; however, when Israel released the prisoners, it concurrently announced that it would be building additional settlements. According to the former Middle East peace envoy, this infuriated PNA leader Mahmoud Abbas, because it implied — incorrectly — that Abbas had consented to the building of more settlements in exchange for the prisoner release, which would have been unacceptable to most Palestinians.

Yet another explanation holds that it all comes down to the missing teens. After the teenagers went missing in June, Israel swept through the West Bank, detaining over 500 Palestinians, possibly killing 10, and arresting members of Hamas. Normally, Israel would notify Abbas and the Palestinian Authority before carrying out a raid like this, but didn’t do so this time.

As it stands, Israel has started launching airstrikes on Gaza and is hinting that it might invade. The immediate goal of any negotiations — at least those initiated by a third party — would be to prevent such an invasion.

Is anyone trying to stop that?

President Obama has also offered to step in. The U.S. formally blames Hamas, not Israel, for the latest escalation, but on Friday, Obama called Netanyahu and offered to broker a ceasefire. However, Netanyahu said that a ceasefire is “not even on the agenda.”

The obvious mediator for the talks would be Egypt. On numerous occasions since it signed a peace treaty with Israel in 1979, Egypt has played the role of peacemaker between Israel and Palestine, most recently during the 2012 invasion of Gaza. However, Egypt has a new president now — Abdel el-Sissi — and it’s unclear where he stands with regard to Israel and Palestine, whether he has any interest in being a mediator or what sort of deal he might usher in if he did.

If past is any precedent, it will likely unfold somewhat like this: Israel will briefly invade Gaza, then withdraw after the two sides sign a ceasefire. That’s what happened in 2008 and 2012 — but then again, both of those disputes were mediated by the Egyptian leadership, and it’s unclear what the Egyptians will do this time around. Regardless of how the current situation turns out, the larger Israeli-Palestinian conflict isn’t going anywhere anytime soon. There’s a reason it’s been called “the most intractable conflict in our world.”