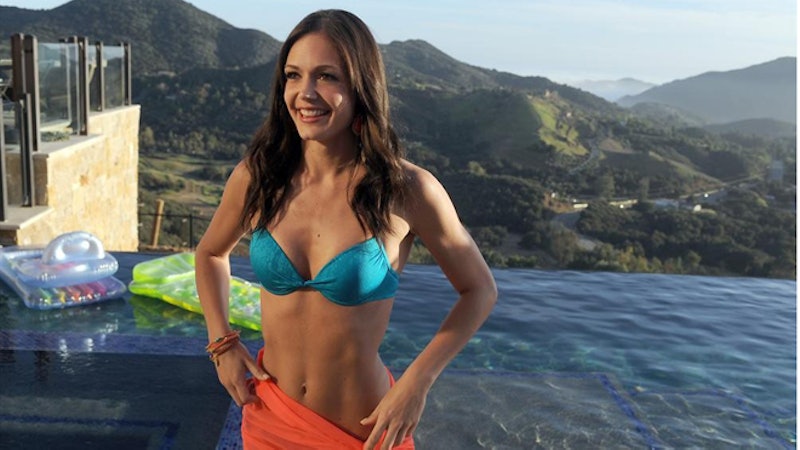 There are a few standouts from last night's Bachelorette finale, and while I could probably devote a whole post to that amazingly-waterproof mascara that Desiree Hartsock was wearing, I think instead I'll focus on the mind-boggling fucked-uppedness that was the entirety of the season's two final hours. After witnessing Brooks Forester dump Des with the same resolve with which Bieber dumps weed off his tour bus, we were all pretty positive that her heartbreak would lead her to let Chris and Drew down easily — the finale would feature their exit limo rides out of paradise, and we'd get a montage of Des doing crunches, wearing crop-tops, and walking in a field of flowers as she looks off into the distance contemplating her sad, sad love life. Oh, if only we had been so lucky. Out of absolutely nowhere, Bachelorette Desiree chose Chris Siegfried, and it made no sense whatsoever.

Here's what was so messed up about the whole thing. At no point during the entire episode did we feel even the slightest inkling that she would chose Chris. We watched her break Drew's heart (which, by the way, ouch – that poor robot of a man didn't know how to compute the feelings of pain, and he almost short-circuited right there on the sand) and when it came time for Chris's date, everyone thought she was going to let him down, too.

Nope! After Chris admitted to her that he feels like their relationship has had constant growth, she shrugged in surprised agreement she basically said, "yeah, I mean, I guess you can meet my parents." It was almost as if you could see her think to herself, "well, might as well get my family some camera time while they're here."

The whole time, mind you, the musical accompaniment provided by the producers was downright solemn. It was like there was a dirge playing throughout the whole show. It set us up to feel sad and empathetic toward Des, who, sob!, just can't find love, and then it left us hanging when, wait!, she isn't sad, she's apparently, in love.

Which, no. You don't go from telling Brooks he's "the one" to then getting engaged about three days later to someone who was clearly her second choice. And she didn't even say WHY. All we got is that her intense love for Brooks "clouded her judgment" and when he left, she was able to see that she actually loved Chris the whole time. WHAT?!

You guys. When Chris pulled up to the alter in the limo, I was shocked that Des decided to break up with him there, because no part of me thought they were actually going to get engaged. It just wasn't possible. And when she interrupted him right before he got down on one knee, everyone was pretty sure that she was going to say something like, "oh, we should keep dating for a while", etc., etc, but nope! They went through with it.

And THEN, on After the Final Rose, Chris showed us the wet blanket that he really is — why wasn't he pissed? He was plan B. He was a minor leaguer pulled up the majors at the last second. Doesn't he see that? Are they both just dead inside? It makes so little sense that they're engaged that I have to wonder if they weren't incentivized with a cash bonus from ABC. Something had to bring them together, and it doesn't seem like it's love.

The After the Final Rose had the potential to be so dramatic, to be so heated, and yet, nothing. The biggest surprise was Brooks' beard, and that's about it. That said, it did feel like there was some serious tension between Des and Chris, but that just might be me projecting. I was half expecting an Emily Maynard, Brad Womack-type sit down, where they'd explain that they're together, for now, but that things aren't going well.

It was the weirdest, most confusing, most depressing finale ever. Now it's up to Juan Pablo to bring the fun back to the show. No pressure, dude.