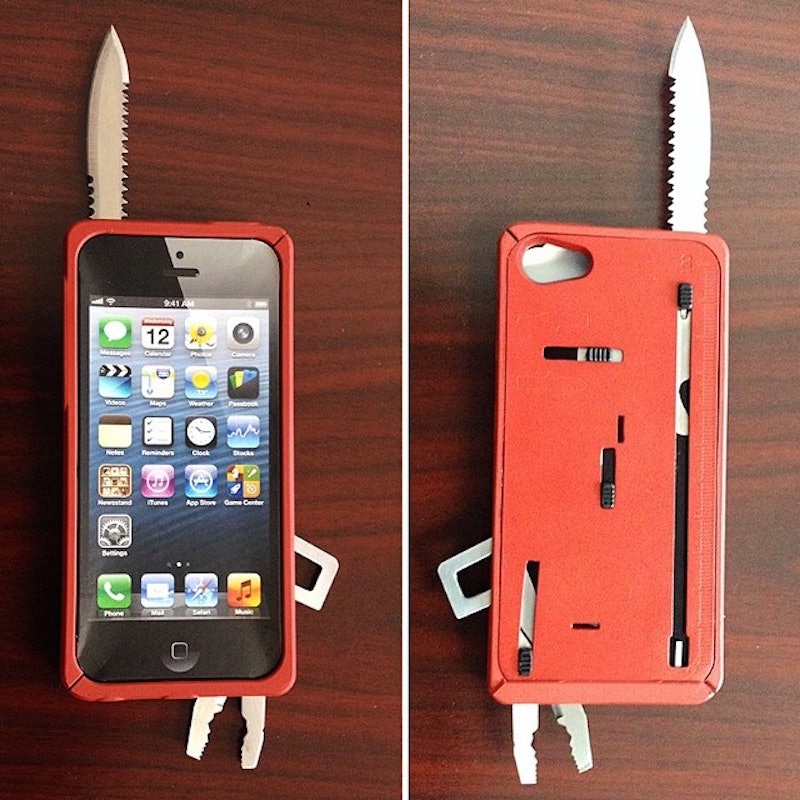 The next time you go on vacation and stock up on questionable souvenirs, just check it. If you don't, not only will your new samurai sword be confiscated, but your confiscated stuff might end up on TSA's Instagram. The Transportation Security Administration has joined the photo-sharing craze — not to share metal detector selfies or snaps of their lo mein from Wok & Roll, but to remind us why these security checks are crucial. The bizarre and terrifying items they've documented so far are enough to make you OK with an extra pat-down or two.

Among the most alarming items the TSA has posted on its Instagram feed, which boasts close to 100,000 followers, include knives hidden in iPhone cases, utility blades concealed in a Scooby-Doo greeting card, and a stun gun disguised as a smartphone. Just the sheer number of throwing stars alone is cause for concern, including one with six folding blades that looks like it belongs to some comic-book villain. Not to mention the guns — so many guns!

According to the Huffington Post, the TSA confiscated 1,828 guns in 2013, 84 percent of which were loaded, and one in three already had a bullet in the chamber, ready to be fired. Bob Burns, the man behind the Instagram account, tells Wired that the photos is helping to change the public's perspective on the TSA, an organization that has been synonymous with "hassle."

Besides obvious items like loaded guns and samurai swords, the TSA's Instagram acts as a visual guide and reminder about which items are prohibited. But don't worry — if you're embarrassed that your nunchakus ended up on Instagram, the TSA doesn't release any names and isn't commenting on the weirdos who own the confiscated objects (unless you commit a felony by trying to bring a live grenade on board).

"We’re not trying to make a statement that people are trying to do anything nefarious with these items," TSA Press Secretary Ross Feinstein told Wired. "We’re just trying to alert people that these are still prohibited items."

This may be an Improvised Explosive Device training kit (a.k.a., it's not real), but that would be terrifying to come across on an airplane.

Chances are you won't run into a bear on your JetBlue flight, so maybe check your bear mace?

This knife concealed inside an iPhone really makes you wonder... who does this?!

At least the last phone looked real. This is the fakest-looking smartphone I've ever seen, and secondly, there's a button that says "Stun." Who were you trying to fool, buddy?

Seriously? Who do you think you are, Raphael from the Ninja Turtles?

For some reason, people seem to think that it's OK to bring dummy grenades onto a flight, which you can see happens a lot. Oh, except that that last one is a live grenade and the guy was promptly arrested on felony charges.

Same with throwing stars. If you want to be a ninja, you're going to have to learn to be more stealth with your weapons — like checking it, for example.

Disguised lipstick also seems to be pretty popular. They may be great self-defense tools against muggers, but again, you're probably not going to be needing it on your flight.

And then there are all the guns. Given how many shootings occur, it kind of makes you wish there was a TSA security checkpoint everywhere, doesn't it?