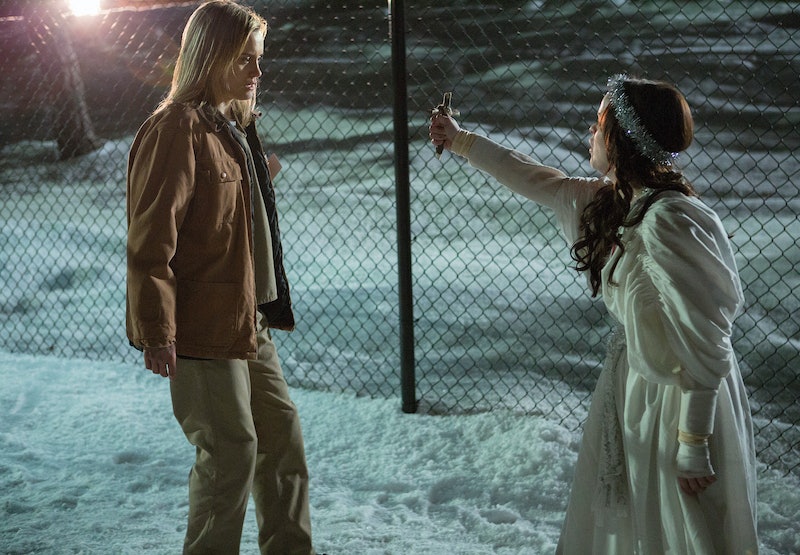 When, on Thursday, it was announced that Orange is the New Black was nominated for a whopping 12 Emmy Awards in the Comedy category, most fans had one response (after the initial elation, of course): since when is it a comedy? Sure, the show has its share of funny moments, but placing a series about the realities of prison in the same race as The Big Bang Theory and Veep just seems wrong. The thing is, though, that Orange isn't a drama, either. For all of its dark, serious moments, there's plenty of light-hearted humor and witty one-liners. Like so many shows, Orange is the New Black doesn't fit into one category — and while that might not be an issue for viewers, it brings up a huge problem when it comes to awards shows.

The way the Emmys work, there are two potential categories for shows to compete in: drama and comedy. For many series, this isn't a problem; everyone knows exactly where Mad Men or New Girl would go, for instance. Yet for those, like Orange is the New Black, whose tone falls somewhere in the middle, figuring out where they belong can be difficult. More often than not, the choice comes down to where the show has the best shot of winning; sure, Netflix might've said they were submitting Orange as a comedy because of the show's "use of humor," but the more likely story is because this year's drama category is way too crowded. Surrounded by series like Breaking Bad and True Detective, Orange wouldn't have had a shot — and so, despite it not really fitting the criteria, Orange became a comedy.

Yet while I'm all for a show as good as Orange taking the best shot it has of being nominated, it's frustrating that there isn't a category in which it fits. Because really, dramedies — and Orange is one completely — aren't that unusual. Plenty of shows straddle the line between drama and comedy, especially in today's golden age of TV. With television becoming more anticipated than the movies, shows have higher pressure to be compelling, and often, that means making viewers laugh and cry in the same episode. Orange isn't the only Emmy contender this year placed in the wrong category; Masters of Sex (a "drama," below) and Girls (a "comedy"), could easily fit the criteria for dramedies, but aren't given the recognition. These shows veer between humor and darkness, and to group them as one or the other takes away from all they have to offer.

And it also takes away from the series that do fit their categories. By placing shows like Orange in the Comedy race, real comedies like Brooklyn Nine-Nine or Parks and Recreation might've lost their chance of earning a nomination. It's happened plenty of times before; take Nurse Jackie's 2010 nod, for instance (no Community) or all those nominations Ally McBeal got back in the '90s (hey, maybe Freaks and Geeks could've had a shot). These shows deserve honors, for sure, but not in a category that simply doesn't fit.

It's not just TV, either. The Golden Globes, too, split their contenders between drama and comedy, and so more often than not, a movie that's half-and-half winds up in a category it clearly doesn't belong. Take this year's nominees; not many people would call Her or Inside Llewyn Davis feel-good comedies, but there they were, competing alongside American Hustle, Nebraska, and the Wolf of Wall Street (all of which aren't exactly laugh-out-loud movies, either — were any of this year's nominated "comedies" actually funny?) The drama contenders made more sense, as movies about issues like slavery or pirates tend to get categorized a bit more easily. Yet for shows and films that like to mix some humor in with their seriousness, the placing becomes complicated — at least when the system's set up the way it is now. If awards shows would just introduce a dramedy category, then the problem would be totally solved.

So, Emmys and Golden Globes, if you're listening: start caring about the dramedies because a) they exist and b) by ignoring them, you're doing a big disservice to all the other shows that actually do fit nicely into the categories that are already in place. Series like Orange and Masters of Sex deserve recognition, of course, but for what they actually are: sometimes funny, sometimes dark, and always entertaining.