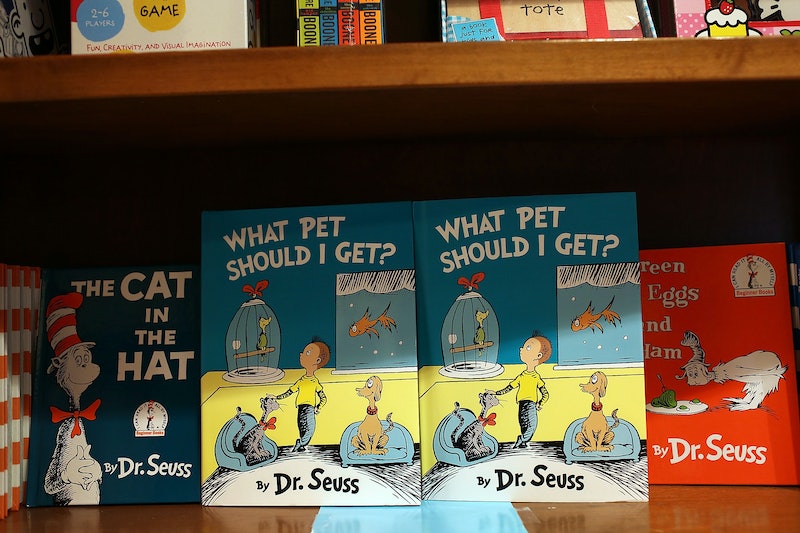 Universally beloved children's author Dr. Seuss (Dr. Theodor Seuss Geisel, if you're feeling formal) published 46 books for the younger set over the course of his sprawling career (fun fact: Seuss originally tried to write under the pen name Dr. Theophrastus Seuss, before deciding that particular moniker was way too much of a mouthful for his dedicated fanbase), but that doesn't mean that his books are just for tykes and toddlers. Sure, if you're looking for Seuss at your local bookstore or browsing for a fresh copy online, you're definitely going to head straight to the kids' section to get your Seuss fix, but the power of the good doctor's words spans all ages.

Dr. Seuss should really just have his own section, because the lessons of his books work — or should work — for everyone. Think of it this way: you're just as likely to get a copy of Oh, the Places You'll Go! on the occasion of your birth as you are to celebrate your high school or college graduation. And there's a reason for that, because although Dr. Seuss' whimsical turn of phrase and larger-than-life situations seem to be primed for kiddo eyes and ears, the lessons folded into those glossy, colorful page are for all ages. Dr. Seuss probably taught you how to be a better adult when you were just a kid, instilling ideas and concepts in your lil' noodle you might not even realize came straight from the Seuss-ography. But don't worry, we're here to refresh all the times that Dr. Seuss made you a better adult (because he totally did). Here's all the stuff he taught you.

Green Eggs and Ham's Sam-I-Am was decidedly not into trying the eponymous breakfast dish (who could blame him?), but the book's unnamed narrator was all about getting him to try the apparently tasty treat. It took a long time, but when Sam-I-Am finally took a bite, he was all in.

2. A clean home is happy home

The Cat in the Hat is all about wrecking a home — thanks, Thing One and Thing Two — but cleaning it up just in the nick of time. Although it's probably not the best idea to hold off on your cleaning until the last minute, it's important to keep things neat when you can.

3. Be wary of strangers

Yup, The Cat in the Hat is about stranger danger. Although it may seem fun to let a big cat into your house, maybe think twice. That's just common sense for all ages.

The Lorax reminds us that the environment needs to be taken care of — especially when dudes like The Once-ler come into town and decide to cut down all our trees — and the perils of overconsumption. Heady stuff for the little ones!

5. It's never too late for second chances

Even The Lorax ends on an upbeat note, with a message about the power of caring and trying again (in this case, planting new Truffula trees), but the lesson is universal. Even when things look really bad and utterly unmanageable, hard work can still breed big hope.

6. The importance of taking good care of our pets

One Fish Two Fish Red Fish Blue Fish might as well be called Look At All These Cool Fish We Have and Take Care Of, but that's just not a snappy enough title.

7. Accept the things we cannot change

The 500 Hats of Bartholomew Cubbins is about a boy and his magically growing hat collection. Bartholomew can't do anything about those damn hats — and it actually gets him in trouble with the law — but his plucky spirit and ability to accept something way out of his control help him power through, to a world without crazy hats (and with a lot more money).

8. Phonics can help us remember anything

Dr. Seuss' "simplest Seuss for youngest use" isn't really about jumping up and down on your dad, though Hop on Pop's title could be interpreted that way, it's about learning and using phonics to remember things. Did you get hooked on phonics when you were a kid and can't remember why? Thank Dr. Seuss.

9. Stand up for yourself

The title character from Thidwick the Big-Hearted Moose is just that, big-hearted, but his kindness gets in his way big time. After allowing all sorts of things to take residence on his actual head (from bugs to birds), Thidwick suffers mightily (his poor horns!), but finally digs deep to stand up for himself and kick all his no-good "residents" out.

Before Horton heard a Who, he got stuck watching the egg of a lazy bird (Mayzie, who literally abandons her child to go on vacation) in Horton Hatches the Egg. Taking care of the egg isn't easy and the elephant endures harsh weather and taunting words, but Horton refuses to break his promise. His reward? A baby bird-elephant who loves him (and not his lazy mom). That's what you get for being "faithful, one hundred per cent."

Horton's a loyal elephant, through and through, so it's no surprise that when he heard the Who community singing out from a tiny speck of dust in Horton Hears a Who!, he dedicated himself to caring for them. Again, Horton was made fun of, but he persevered — eventually saving an entire community and earning the respect of his jungle pals.

12. It doesn't matter what other people think

Horton is a prime example of a character willing to do what is necessary — no matter what — without an obvious reward waiting for him. He gets made fun of by everyone, is mercilessly mocked, but he never gives up and sees things through to some very wonderful endings.

13. Remember the true meaning of the holidays

No, it wasn't very nice of the Grinch to steal Christmas (uh, in How the Grinch Stole Christmas), but it does send a powerful message about the commercialization of the holidays and how it's important to remember what they're really supposed to be about.

14. Greed is bad and success is temporary

Poor Mack the turtle suffered mightily in Yertle the Turtle and Other Stories because of the greed of Yertle the King and his demands to expand his kingdom, but Yertle's lack of empathy proved to be his downfall, and Mack's determination to free himself (and burp about it) ended up putting him right in the mud (literally).

15. A good night of sleep is essential

Although all of Dr. Seuss' books are about imagination, Oh, the Thinks You Can Think! reminds us of the power of dreaming big in the most indelible of ways

17. Growing up and exploring along the way is the most important of all

"Will you succeed? Yes, you will indeed. (983/4% guaranteed.)" Oh, the Places You'll Go! might not come with a true guarantee, it never fails to spark a zest for life in its readers. Who knows what the future may hold? But one thing is for sure — Dr. Seuss wants you to find out.