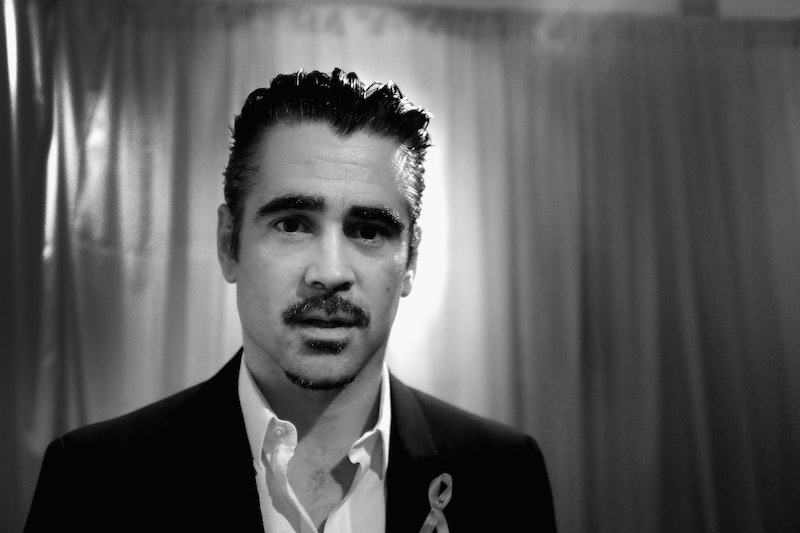 So rumor has it that Colin Farrell is being eyed for True Detective season 2, and is currently in talks for one of the (at least) four central roles in the series. This is huge news, of course: Thanks to a nearly perfect first season and the genius of stars Woody Harrelson and Matthew McConaughey, a lead role in True Detective's second season is one of the most coveted in Hollywood — any actor's potential involvement would be a hugely talked-about development.

While it's not yet confirmed whether or not Farrell will be involved (for what it's worth, though, Deadline says they're "confident" he'll be in the cast, and they're generally a reliable source) that, of course, won't stop me from running with this news and hypothesizing what exactly a Colin Farrell–starring True Detective could be like. After all, since those Jessica Chastain rumors turned out to be false, this is one of the first new pieces of solid, seemingly credible information surrounding the season 2 cast that's hit the Web — I'm on a True Detective high.

A potential casting of Farrell really begs the question: Who would star alongside him if he were to portray one of the show's lead detectives? Whoever takes on the role would have to share immensely good on-screen chemistry with him — and it's been mentioned before that one partner will be a woman. So we're looking for a female actress that can handle an emotionally taxing role like this and also command the screen alongside Farrell.

This might be an unpopular choice — not for people believing Poésy has a lack of talent, which she definitely does not, but simply because there's maybe a 0.01% chance that her name was ever even brought up when rumors were flying that more well-known actresses like Jessica Chastain were being looked at for the role.

But hear me out: Though well-known, especially in France, Poésy's one of the most underrated actresses in Hollywood right now, and a role like this could give her the chance to show American audiences that she's capable of more than just playing the pretty French girl (see: Gossip Girl). Her role as Fleur Delacour in the Harry Potter films let her show some hint of a badass side, so we definitely know it's there — and what better role to bring it out than one where she gets to portray a strong female police detective who takes no crap from anyone?

Plus, she's already starred alongside Farrell in In Bruges, so we know the two have on-screen chemistry.

It would be an unexpected choice from HBO, and certainly a bigger risk as Poésy doesn't have nearly the same amount of star power as McConaughey and Harrelson, and even Farrell — but it could turn out great. Taylor Kitsch is also rumored to be eyed for a lead role, and while he's exhibited major talent in roles like Tim Riggins on Friday Night Lights, he's not as famous as season 1's leads either. Casting someone less well-known like Poésy would be a shocking decision that could easily pay off tremendously.

Or they could just give the role to Jessica Chastain and she would be a sure hit plus a total badass. Or cast them both! Just spitballing here...