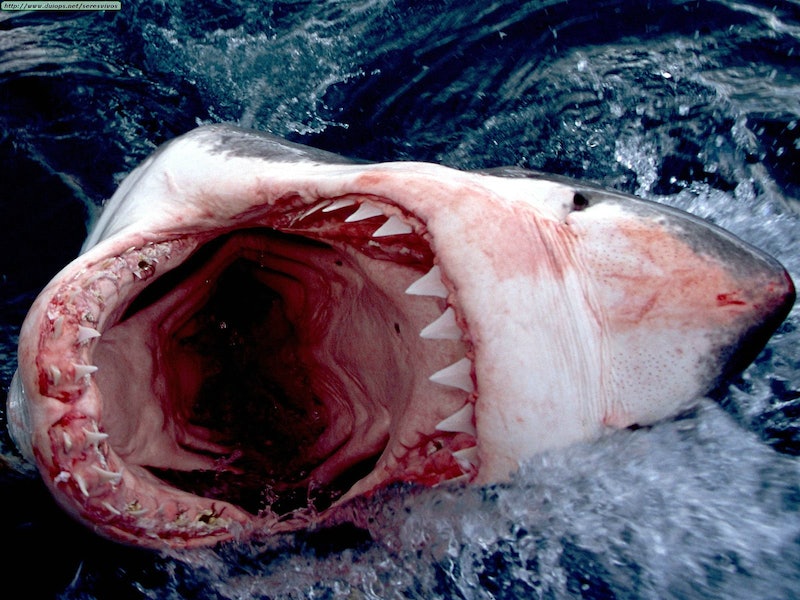 Some events are so unbelievable and so unique that we have to create specific vocabulary to describe them. And it should come as a surprise to no one that Discovery Channel's Shark Week is one of these events. We learn things we never thought of before, and we sure as hell will never go swimming again because, holy fuck, are sharks everywhere.

So, along with some basic terms you'll need to know for the week ahead (like "Help!" if you're brave enough to go swimming after watching some of these programs), here are some key words you might want to use over the course of the next six days while you watch shows like I Escaped Jaws, Voodoo Sharks, and Sharkpocalypse. These may not be the same words some of our scientists use, but, by god, will they come in handy.

Terms You'll Need For The Rest of Shark Week

Sharknology: Shark-specific technology. ex. Dude, so now they can track sharks down to 6,000 meters below sea level? That's some crazy ass Sharknology.

Shark Shade: The pity and disgust one feels when you accidentally talk to someone who is not invested in Shark Week to the same degree that you are. ex. The date was going fantastically until I mentioned Shark Week and he had no idea what I was talking about. I threw that bitch some Shark Shade, put a $20 on the table and walked out.

Shark Week Shwasted: The special kind of drunk you get playing Shark Week drinking games with your friends. ex. I was going to have to have that awkward "I-was-just-drunk" conversation with him about last night, but he said he knew I was Shark Week Shwasted, so I think I'm in the clear.

Jawesome: The exclamatory proclamation the entire room makes when a shark jumps high enough attacking something to totally clear the water. ex. Whoa, shit, did you just see that Great White get a full foot off of the water? That was frickin' jawesome!

Sharkin': When you're walking alone in a public space and you not-so-subtly pretend you're a shark, cutting the water with your sinister dorsal fin (when in fact you are just putting your hands in front of you and pushing people to the side). ex. Times Square was jammed this morning so I was just Sharkin' all the way to the office.

Insharknia: The inability to sleep due to concern that there is a monster shark hiding under your bed/in the shower/the sink/down the block. ex. I knew I had work the next morning, but after watching that thing about the Megalodon, I just got really bad insharknia and I didn't get to bed 'til 4 am.