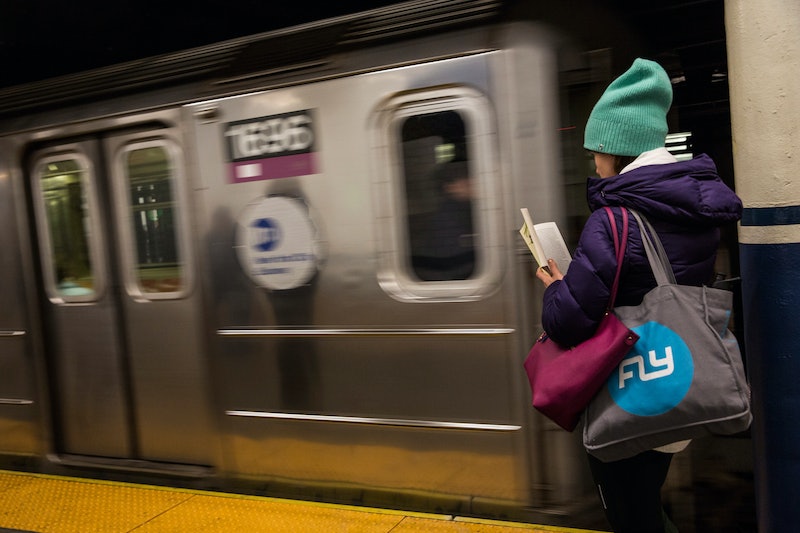 Nearly ever reader who rides public transportation can identify with the moment during which you see a fellow commuter absorbed in the latest bestseller you've been wondering about, and you want to ask if it lives up to all the hype. Or maybe you see a total stranger nearing the end of one of your favorite books and feel the urge to discuss the insane plot twist that comes in the last 20 pages. But most of us keep our heads down leave the other readers to muse in peace.

Not Uli Beutter Cohen. After moving to New York City, she started a blog called Subway Book Review. The premise is simple: She finds strangers reading books in print on the subway and asks them to share their thoughts. Every review is accompanied by a photograph, giving the blog a very Humans of New York vibe — but with a literary twist. Blog followers get not only a book recommendation, but a small insight into the many different lives you can come across on the New York City subway. Here's what Cohen had to say about the project.

BUSTLE: Why did you choose the subway and not another venue when you were brainstorming the idea for Subway Book Review?

ULI BEUTTER COHEN: Aside from the subway feeling like a microcosm of the New York literary world, it’s also a place that presents challenges and surprises, which makes Subway Book Review particularly fun. You never know who will get on the train with you, how much time they have before they reach their stop; you might get a "no" and be stuck next to that person in a crowded car. There are a lot of valuable elements I get to practice because I hold reviews on the subway, like being in a positive state of mind, ‘getting to the good stuff’ and being kind — things that make for a good life in general.

The Wettest County in the World by Matt Bondurant.

Devon: "The book is about moonshining in Franklin County in Virginia post World War One. They made more liquor illegally than any other county in the world. It's based on a true story, but told as historical fiction. The author is the grandson of one of the men who is responsible for making Franklin County one of the most dangerous places of that time. I like historical books. It's an interesting, easy read but also a bit sad and unforgiving."

How do most people first react when you approach them to be featured on your blog? What's the most interesting encounter you've had so far?

I love every Subway Book Review encounter, because each is a unique taste of New York. People I approach are often surprised at first. Sometimes I can see them vet it and other times they are immediately excited to be part of the project. It’s amazing how many people share not only insightful reviews, but also a small piece of their own life. There is the French teacher, Sharon, who said she would be erasing notes someone else wrote in the book she was reading, because she didn’t find them accurate. Julie, who was pregnant and reading Just Kids. Her take on curiosity and growth was really insightful. And there was this very interesting moment with a woman, who, when I approached her, said “That sounds like a wonderful idea and I so wish I could participate, but I am an introvert and I’m afraid I can’t.”

Laura: “Díaz is a great Dominican writer. His writing is often about being an outsider in a place that should be your home. I went to a reading of his when I had just moved to New York from Copenhagen and talked to him afterwards. He has a great style of writing and incorporates Spanish slang which is cool. Sometimes when I speak English I mix a foreign word in there or when I speak Danish I say an English word sometime. This book, Drown, is a compilation of stories. The characters look for their home but everything is so different from what they know. I relate to that.”

Are there readers of particular genres that usually seem most willing to chat with you about what they're reading? What genders and age groups do you see reading on the subway more often?

I haven’t noticed that the genre of book affects someone’s interest to give a review, but the age of a reader plays a big role in their willingness to participate. People age 60+ have a hard time with the social media aspect and often don’t want their picture published. Their sense of privacy is a totally different one from that of a 20-30 year old. That group is on board in a heartbeat. I see a lot of young people reading, both men and women, and I see an upsurge of people reading printed books again. The book someone carries says a lot about the person — as much, if not more, than a brand purse or sunglasses. We’re in a time now, more than ever before, where we recognize others and want to be recognized by others through easy to process visual cues. I think that has a lot to do with it.

In Cold Blood by Truman Capote.

‘kola: “Truman Capote describes a fictionalized true murder that happened in Kansas. For me it’s the author who’s interesting. He’s a great writer and very engaging. If you’re into suspense this is not the book for you, because he tells the reader in the first pages who will die and ‘who did it’. What captivates me is that Capote is very descriptive about Kansas and its mystery. The book is overdue at the library. I’m paying 25 cents a day now to read it.”

Wild Ones by Jon Mooallem.

Eli:"The book is about the weird ways we conserve animals. Mooallem goes into the history of how we have viewed American wildlife over time and how our thoughts about saving them has changed over time. He does it in an original and funny way without it being overly sentimental. I read a New York Times article where he wrote about squirrels and how they cause power outages all over the US. He also wrote about gay animals before. You should check out his twitter feed. It's really something to look at. I'm a science writer by profession and it's great to learn from his style of writing and how he tells stories."

What's unique about getting a book recommendation from Subway Book Review rather than another website?

Subway Book Review is as much about the reader and reviewer as it is about the book itself. I always ask, “What are you reading and why?” which makes the review very personal. The answers are surprisingly honest and specific, so you really get an idea of the person’s life, personality and what they are thinking about or dealing with. I find that creates a greater context and adds curiosity around a book which other book reviews don’t necessarily deliver.

Bring Up the Bodies by Hilary Mantel.

Roman: "Bring Up the Bodies is a classic rise and fall story. It's a period drama from Tudor times and about the story of Henry VIII and Anne Boleyn. It's got all the sexual intrigue of a Kardashian plot. We learn that even back then it was all about money. Bankers have ruled the world since the fifteen hundreds. My mom sent me this book. She probably thinks I don't read enough and since we're English, she wants me to keep up on English history."

Can you give us a Subway Book-style review of a book you're currently reading?

I’m currently reading The Sea is My Brother by Jack Kerouac. This is his first book which he wrote by hand at age 21. It was only published a few years ago. His language is descriptive and fascinating, but it’s also driving me a bit nuts — it’s a little bit like listening to experimental jazz. So I’m only getting through it slowly, though I am usually a fast reader. From what I can tell so far, it’s a typical Kerouac story: men trying to find meaning while distracting themselves with booze and women. I understand this time they will take it to the sea, which is what made me interested in this book. I want to hear how Kerouac does on a boat where he can’t escape. Don’t get me wrong, I really respect his writing and am drawn to his stories. Last summer I read On the Road. For some reason, I find reading Kerouac on a hot summer night is just right. It pulls me even deeper in his somewhat manic but ever so rhythmic storytelling.