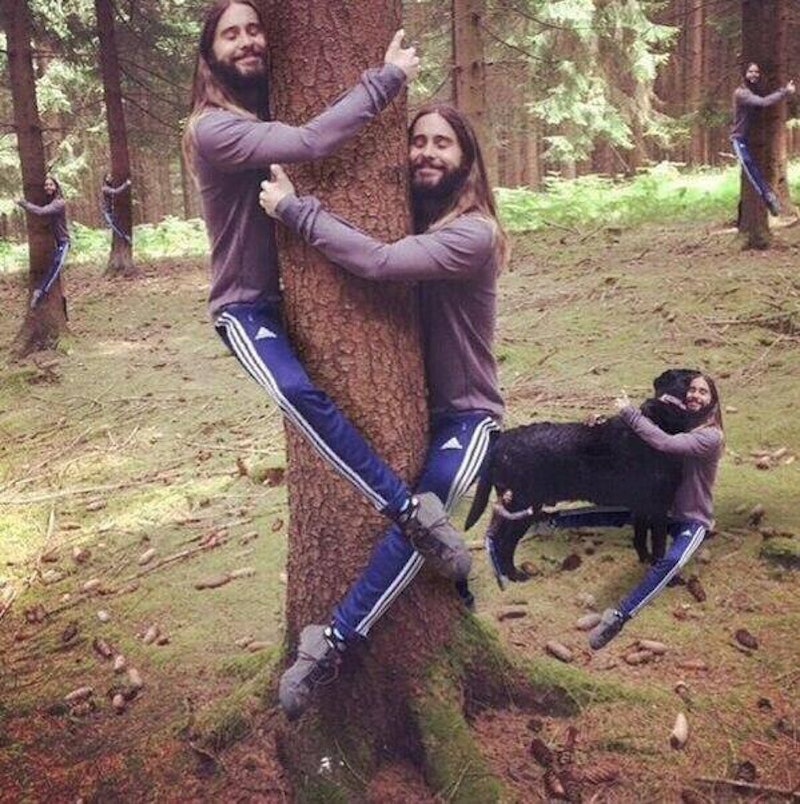 Sometimes finding the origin of a meme is difficult. Not so with the Jared Leto hugging things meme: That can be traced back to E! Online, which posted the original Instagram photo of Leto hugging a tree with his eyes closed and a giant grin on his face and asked "Can this photo of Jared Leto hugging everything be the next amazing Internet meme (please)?!"

They asked and the Internet answered. I'm usually pretty against media outlets trying to orchestrate viral hits, but this meme is so delightful that I'm willing to let it slide at least just this once. After all, it's Saturday, which is no time to do anything serious, and with so much terrible stuff going on in the world, it's nice to just take a break and watch a happy Jared Leto hug things.

Besides, soon after E! Online encouraged the meme, Jared Leto himself posted a template on his website to aid in people's Photoshop endeavors. Since it now has Leto's own stamp of approval, I'm totally on board with the #JaredHugginLeto meme.

Sometimes, the Internet is a weird place — a place where potato salad raises over $40,000 while other, more important Kickstarters are left in the dust, for instance — but sometimes it's a great place with edits of joyful Jared Letos. So I've sifted through the multitudes of photos to bring you the 18 best ones for your enjoyment.

WHERE IT ALL STARTED

This was the fateful picture Leto shared. Little did he know what was to become of it.

AND THE FIRST MEME

From there it spiraled out of control.

The extreme happiness on Leto's face and the grumpiness of the cat kind of balance this photo out to a neutral emotion.

He came in like a really happy wrecking ball.

Hey, when it's Frozen outside you have to huddle for warmth.

Move over, Simba. There's a new king of the Pride Lands.

HE'S GOT THE WHOLE WORLD IN HIS ARMS

No one loves the Earth more than Leto.

At least Leto likes you.

We feel you. We all want to hug Benedict Cumberbatch, too.

Who knew the Oscar selfie could get even better?

If you could get an Oscar for Best Hug, Leto would win.

It's a meme mashup!

Leto's locks are so fabulous he wants to hug them himself.

Leto hugging Leto who is hugging someone else.

I couldn't resist making one of my own.