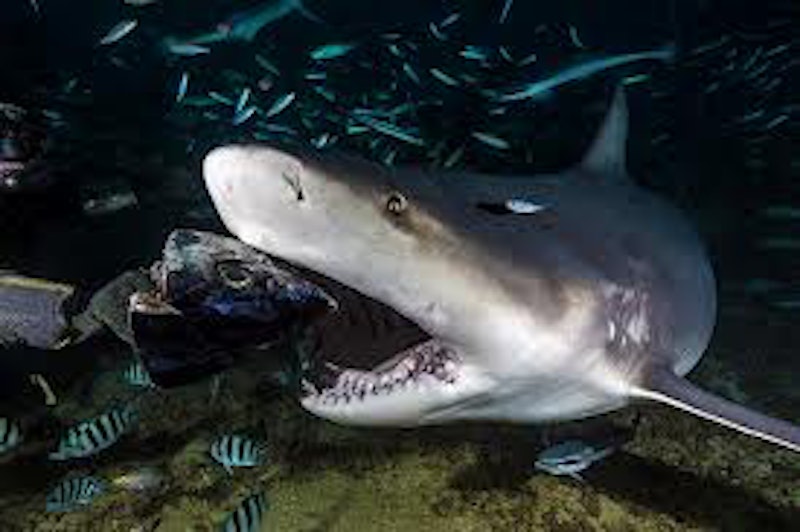 Although Shark Week is only halfway through, already both myself and the fellow shark lovers of the Twitterverse have noticed a new and disappointing trend on Discovery Channel's week-long sharkfest. Between Sunday night's Megalodon: The Monster That Lives and last night's Voodoo Sharks, we're seeing a clear departure from the Shark Week coverage of yesteryear. Now, it seems Shark Week is focusing on mystery and mythical beasts, at the expense of factual shark depictions. And if the voices of Twitter are anything to go by, other people are similarly dissatisfied.

This isn't to say I wasn't totally entranced by both of those programs, because I was. Entirely. But I sort of miss the days when Shark Week was more sharkumentaries and Andy Samberg singing a song about fishes while being surrounded by sharks. I watch Shark Week because I love watching them bite the shit out of things, but also I value the treasured and rare opportunity to be inundated with shark information — ideally, shark information that is true versus debatable.

Voodoo Sharks was totally hilarious and epic, but it is exactly what Shark Week is not: reality television. And if we wanted reality television during Shark Week, we could tune in to pretty much every other channel ever, because the networks know America loves reality TV, and they give it to us in droves. That said, the segment of Voodoo Sharks in which the special covered the bull shark's ability to regulate its inner salinity levels in fresh water was sick — devoting the entirety of the episode to exploring that angle wouldn't have bored us or caused people to switch channels. Huge aggressive sharks roaming the bayous, scaring swamp people? That is frickin' television gold, and you don't need to hone that in with conjecture on the mythical Rookin Phantom to make it ratings-worthy. (Although, for future notice, the world should let swamp people give everything nicknames. Have you ever heard of a shark with such an epic moniker?)

So the worry is that we're going to lose the very nature of Shark Week in Discovery Channel's desperate bid for higher ratings, which it won't get if it betrays the stalwart viewers who made Shark Week successful in the first place. What a vicious cycle! I'm willing to wait out the rest of this legendary week to hold judgment, but I sincerely hope that Discovery can get its shit together and give us some goddamn educational programs about sharks, or this Shark Week addict is going to go off the rails.