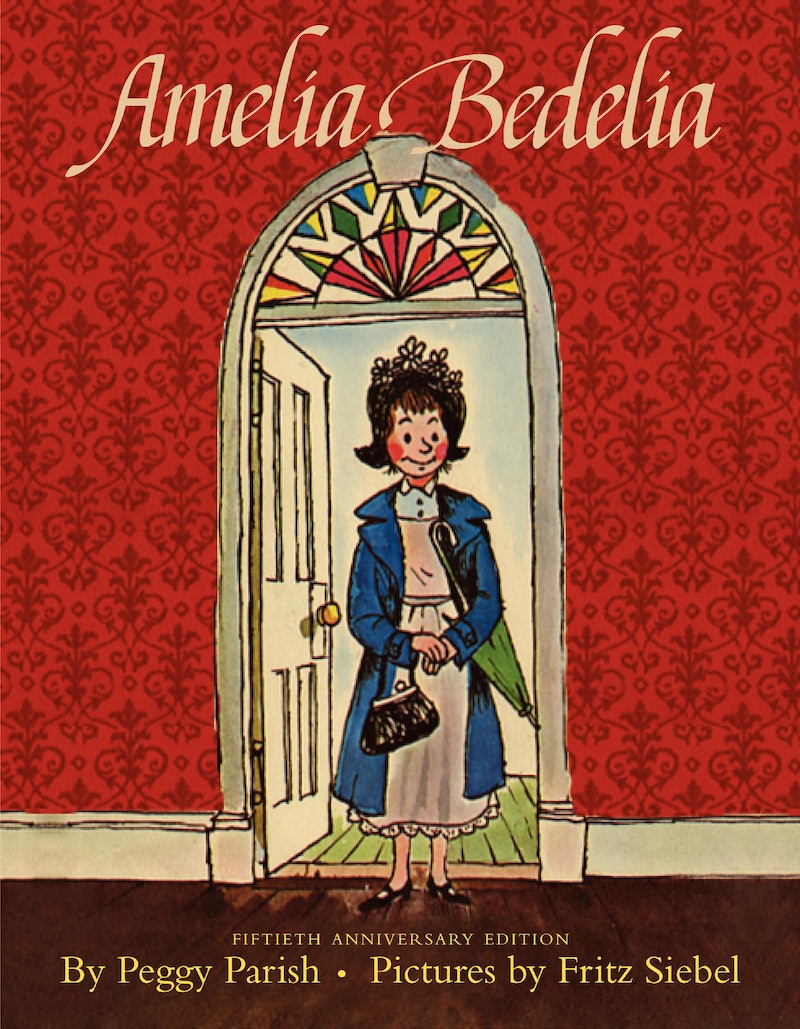 For more than 50 years, everyone's favorite silly housekeeper Amelia Bedelia has been entertaining children, and, okay, yes, grown-ups, too. Since author and teacher Peggy Parish dreamed up the beloved character in 1963, the series has sold more than 35 million copies, plus 11 million more for good measure through licensing agreements. Yes, the books are still being published today (thank goodness), but these stories are the essence of throwback to adults now, and it's just an added bonus that new generations will still get to experience Amelia.

Amelia has gone on many adventures in her time as a housekeeper to the Rogers family. And starting in 2009, Amelia got to experience a throwback herself, as new books were published about her childhood, starting with Amelia Bedelia's First Day of School. There were even whispers of a movie deal, as Tom Hanks' production company picked up the rights to the series back in 2005.

The series never grows old, much like Amelia herself. And there are 7 reasons why we will always love this kooky housekeeper:

1. Amelia is based on Peggy's own life experiences with language

Parish was a 3rd grade teacher at the private Dalton School in Manhattan for 15 years. Along the way, she saw the funny ways her students would misinterpret her directions, leading to unexpected consequences. These silly double meanings of the English language inspired some of the ways Amelia Bedelia handled her chores.

It's lazy to say that Amelia Bedelia is just not smart. The quirky housekeeper's misinterpretations have nothing to do with brains. She takes things literally (back when literally didn't also mean figuratively.) She's incredibly well-meaning and her actions show the difficultly of the English language, not difficulty on her part.

3. Parish's Books Have a Real Sense of Humor

The way Parish plays with language is so clever and funny. Just take a few examples of Amelia's misinterpretations.

4. Amelia Bedelia is a Go-Getter

Say what you want about Amelia, but she works hard and stays positive. No matter what the Rogers tell her to do, though she might question it (why put a sponge in cake?), she gets her job done without a whisper of retort. She's a real go-getter who can handle any situation, which is why things probably work out just fine no matter the misinterpretation.

5. Maybe, Just Maybe, Children Can Be More Clever than Adults

As a kid, reading this book, you think it's funny because you're in on the joke. You know that putting out a light means shutting off the lights so that it's dark. You know that, but even a grown-up doesn't know that. It's powerful for children to see that they can understand these things about language. Children's book expert Anita Silvey explains:

We all love feeling smarter than someone else. For fifty years, children have been able to feel superior to Amelia Bedelia, and since she also makes them laugh at the same time, the combination is irresistible.

We all know Amelia isn't dumb, but it's kind of nice for children to understand that adults don't always get things like they might.

6. Amelia Bedelia is a Family Affair

Peggy Parish suddenly and tragically passed away in 1988 at age 61 of a ruptured aneurysm. At this point, she had published only 12 Amelia Bedelia books. But the books didn't die with her, as we know. Her nephew Herman, who was in advertising, took up the reins after carefully studying his aunt's work. And he didn't take that legacy lightly. At first, he wasn't sure he could handle writing the books, but as children's letters poured in asking for more Amelia Bedelia, he couldn't deprive them anymore. He started the series back up again in 1995. As he told Publishers Weekly:

"I’d sit in advertising meetings, and people thought I was taking notes, but I wasn’t,” he explains. “When people said an Amelia Bedelia sort of thing, I wanted to capture it right away. That launched my habit of note-taking, and I began bringing a notebook everywhere, to jot down things people said, and then think about how Amelia Bedelia would interpret them.”

7. The Books are All About Being Able to Laugh at Life

In the 50th anniversary edition of Amelia Bedelia's first appearance, Peggy Parish has an insightful quote:

I guess I love mischief as much as Amelia Bedelia. I simply enjoy laughing at life.

Amelia Bedelia was never about a simpleton or a housekeeper. It was about how wacky and strange the world can be, particularly when confronted with language and people's interpretations of it. And when it comes to that, sometimes all you can do is laugh.

Truss' zero-tolerance approach to commas is punctuated (pun intended) with hilarious ways you can be misinterpreted by using grammar or marks incorrectly, or even merely differently. Amelia would approve.

2. The Stories of English by David Crystal

Why exactly aren't we all walking around saying "thy" and "thou"? Do Jane Austen and other classic writers have a poor grasp of grammar? David Crystal takes these questions and more to delve into some history (but not the boring kind, the funny kind) of the English language and why we speak the way we do.

With black humor, wit, and black-and-white illustrations, Karen Elizabeth Gordon has been explaining all those little peccadilloes of language since her book was first released in 1984.