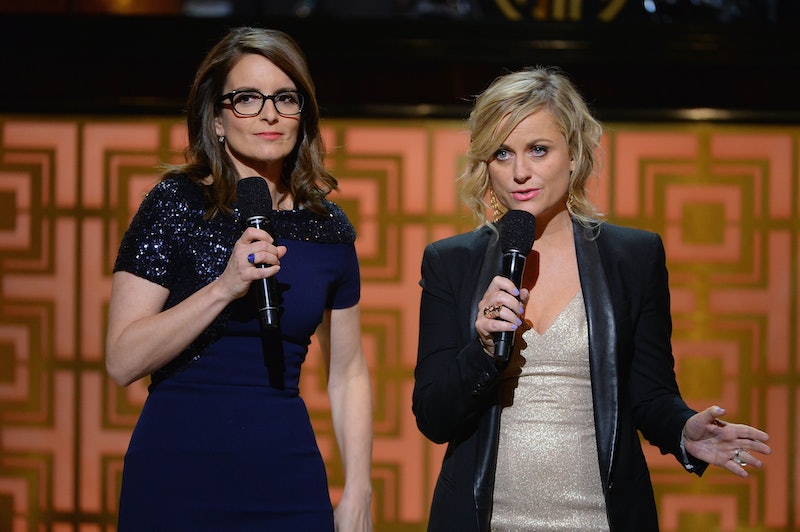 If you weren't already excited for Tina Fey and Amy Poehler's upcoming comedy The Nest — which, yes, is the one where they play sisters, just as everything good in this world intended — then perhaps this will jumpstart your desire to see the film: Vulture just published photos of Tina Fey and Amy Poehler on the set of The Nest , dressed like they literally just stepped out of a Cyndi Lauper music video from 1983. (Also, they're taking a selfie on a very not-1983 iPhone, but people in period clothes using modern-day electronics is always hilarious so that makes the photo even better.)

It's not clear exactly what the scene is at first flance: Though it appears that it would be a flashback or something, Vulture reported that the scene was actually involving Fey and Poehler's sister characters in present-day, turning the sprinklers on some real estate agents who wanted to check out the house. As for the setting, the crew was in Long Island, NY filming scenes that were supposed to be set at a house in Florida.

Personally, it doesn't even matter to me what scene they were filming, because literally anything involving these two amazing ladies is something I would watch with full attention. Like, they could be sitting in a room watching paint dry for two hours, and I would think it's the greatest movie ever. The paint could even be the worst color ever, and it would still be amazing.

Luckily, the film is not about that though: The Nest follows two wild, estranged sisters who return to their childhood home one last time before their parents sell it, and decide to throw a huge party as one last hurrah. This actually explains the '80s clothes they're wearing in this pic — it's probably the only clothes their characters still had at their childhood home.

The film was previously seen shooting scenes in Rockland County, NY, and The Huffington Post reported that they even used Craigslist to cast professional manicurists to appear in the film.